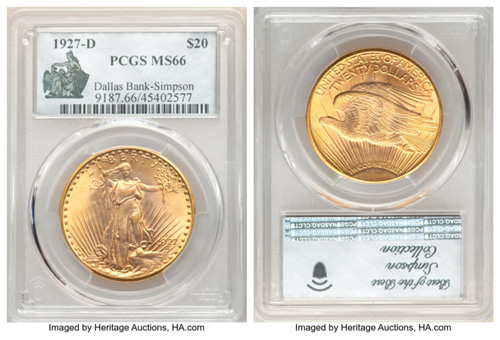 Add to that the provenance that comes with being a part of The Bob R. Simpson Collection, Part IX, and it immediately is clear why a 1927-D Double Eagle MS66 PCGS will turn heads and open eyes when it crosses the block in Heritage Auctions' US Coins Signature® Auction August 22-28.

The rarity alone — it is one of just 13 known survivors from an original mintage o 180,000 pieces — makes it a must-have for the most serious of collectors.

"This is an extraordinary coin," Heritage Auctions President Greg Rohan said. "Four are in international holdings, and two more have not been seen in decades. There are just seven examples, including the one offered here, that have been available to the collecting market, and of those, this is the third-finest known. This magnificent specimen immediately will become the centerpiece of the next collection in which it lands."

The allure of the coin is only magnified by the fact that it comes from Simpson, whose collection has been ranked by Professional Coin Grading Service as one of the best ever assembled.

Also from the Simpson Collection comes a 1920-S Double Eagle MS65 PCGS , a specimen so rare that just five others carry an equal or higher grade. The 1920-S Saint-Gaudens double eagle is one of the premier rarities of the series in high grade, the earliest of the classic rarities among the With Motto Saints. The 1920-S has been called the fifth-rarest collectible issue of the 53-coin series; in high grade, only the 1921 is more elusive. There are just three MS65-graded examples in current population data: two at PCGS and another at NGC.

McGuigan Collection
Many of the 235 lots in this collection have been off the market for years, or even decades, and most — including circulation strikes, proofs, die states and errors — rank prominently in the Condition Census for their varieties.

Top lots in the auction from the McGuigan Collection include, but are not limited to:

A 1796 No Pole Half Cent, B-1a, C-1, Low R.6, MS63 Brown PCGS. CAC is one of fewer than 30 known examples, only 14 of which in all grades have been certified by PCGS and NGC. This 1796 No Pole half cent has been offered just three times at auction since the turn of the 20th century.
• A 1793 Half Cent B-3, C-3, R.3, MS66 Brown PCGS. CAC EAC Grade MS65 is one of 300-400 believed to remain in existence. Just two PCGS examples are certified MS66 Brown, with none finer than the offered example. The PCGS Coin Facts Condition Census lists the offered specimen, an MS65 Brown from the Pogue Collection, an MS64+ Brown from the Simpson Collection and two MS64 Brown examples from the Pogue Collection and the Oliver Jung Collection.
• A 1796 With Pole Half Cent B-2a, C-2, High R.4, MS64+ Red and Brown PCGS. CAC. EAC Grade MS60 is among the finest on the Condition Census 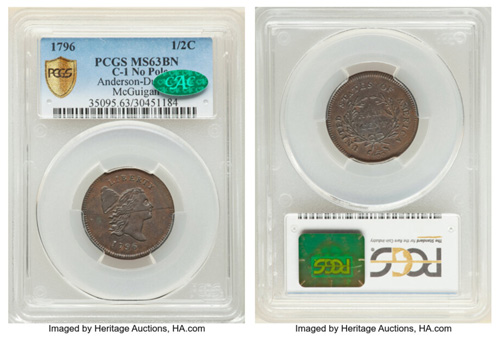 The most complete collection of Massachusetts silver ever offered comes from Salmon, who revolutionized how to collect and organize silver coins from the Bay State. He explained the technology used to strike the early Massachusetts coins and developed an updated classification system that brings clarity to the series, allowing for more distinct and true numbering. Many of the coins among the 138 lots from the collection were previously owned by some of the icons of American numismatic collecting, and the rarity and quality of many are elite. Highlights from the Salmon Collection include, but are not limited to:

• Arguably the finest known example of the (1652) New England Sixpence, Salmon 1-A, XF45 NGC
• A (1652) New England Shilling, Salmon 2-B, XF45 NGC that was acquired privately around 1973 from the Garrett Family Collection, which was owned by Johns Hopkins University and maintained at Evergreen House, and the fourth-finest in the current census
• The Garrett specimen of the 1652 Willow Tree Sixpence, Salmon 1-A, AU55 NGC is a well-preserved example of this very rare Colonial type

Images and information for all lots in the auction can be found at HA.com/1348.