"Little Half Sister" To Bring Big Money At Long Beach

Heritage Auctions will be offering one very special Half Cent in particular in the June Long Beach Auction: a 1793 Half Cent graded PCGS MS64 Brown. 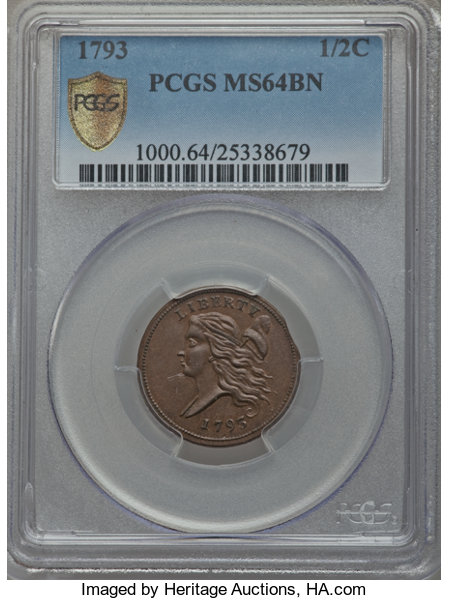 "Little Half Sister" To Bring Big Money At Long Beach

Dallas, TX -- Ever since Roger S. Cohen, Jr. published his standard reference on Half Cents, where he nicknamed these coins the "Little Half Sisters" compared to their companion Large Cents, this phase was cemented into the lexicon to describe these charming Early American coins. While these coins were not always treated with the utmost of care when they were first produced--many over the years were created on cut-down Large Cent planchets rather than bothering to produce nice, new planchets for this specific use--they are beloved and actively sought by collectors today. Some selected examples managed to overcome the obstacles of time, poor production, and the needs of commerce to be carefully set aside and survive in excellent condition even 225+ years later.

Heritage Auctions will be offering one very special Half Cent in particular in the June Long Beach Auction: a 1793 Half Cent graded PCGS MS64 Brown. When you consider how few early copper coins from this period survived without ever entering circulation or experiencing damage and disrepair, this piece stands out for both its rarity and its condition. It is also a one-year type, as the figure of Liberty on the obverse was flipped from facing left in 1793 to facing right in 1794, changing the design after just one year.

When we last offered this exact coin in 2016, it brought just over $100,000. Despite its diminutive denomination, these coins bring big money at such high grade levels! It is among the finest known of the Cohen-3 (C-3) variety and is expected to generate strong bidding when it becomes available at the June Long Beach Auction #1316.