The magnificent Lulu Collection of Walking Liberty half dollars realized over $971,000 in the Stack’s Bowers Galleries June 2021 Costa Mesa Auction, setting a new benchmark for quality and value in this popular Short Set category. 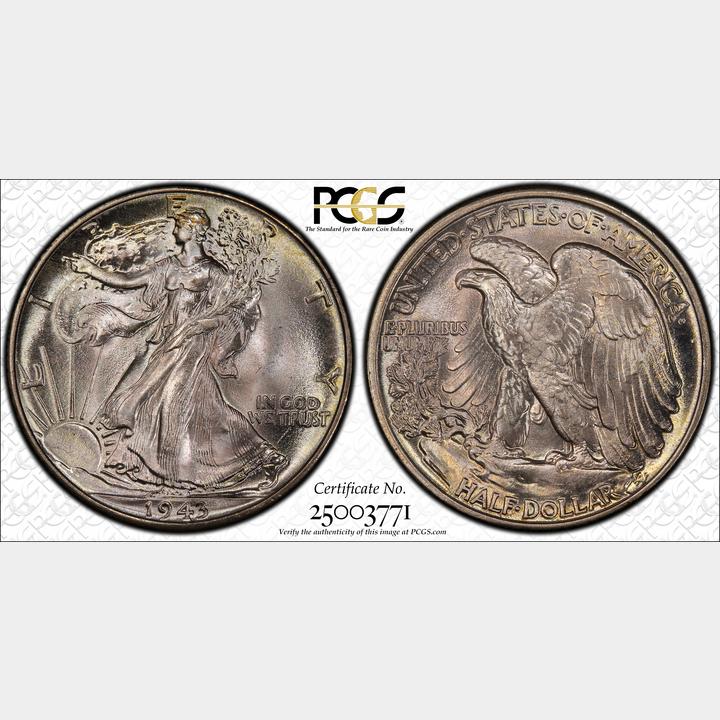 The 1943 MS-68+ (PCGS) CAC was the undisputed highlight of the session, realizing $120,000 and establishing a new record for any date in the Short Set category.

The 1943 MS-68+ (PCGS) CAC was the undisputed highlight of the session, realizing $120,000 and establishing a new record for any date in the Short Set category.

Costa Mesa, CA -- The magnificent Lulu Collection of Walking Liberty half dollars realized over $971,000 in the Stack’s Bowers Galleries June 2021 Costa Mesa Auction, setting a new benchmark for quality and value in this popular Short Set category. A Short Set comprises the second part of the two-folder set for Walking Liberty half dollars produced by Whitman in the mid-20th century. The first folder contained most of the series from 1916 through 1940, with the balance included in the second “shorter” folder. Many decades later, this Short Set format has been embraced by modern collectors and continues to be a highly competitive approach to the series, as demonstrated by the exceptional results in the Stack’s Bowers Galleries sale.

Listed as the #1 all-time finest PCGS Walking Liberty Half Dollar Short Set, 1941-1947, nearly all 20 coins in the Lulu Collection ranked at the very top of the PCGS Population Report and the majority were approved by CAC. Thirteen set new auction records for their respective issues, with many realizing multiples of the PCGS and CAC price guide values listed at the time of the sale. The 1943 MS-68+ (PCGS) CAC was the undisputed highlight of the session, realizing $120,000 and establishing a new record for any date in the Short Set category. The 1944 MS-68 (PCGS) CAC set a record for the issue at $84,000, over twice the PCGS Price Guide value. The 1942 MS-68+ (PCGS) CAC more than doubled the prior record with a result of $78,000, and the beautiful 1942-D MS-68 (PCGS) CAC realized over three times the PCGS Price Guide value at $72,000.

With nine coins graded MS-68 or MS-68+ and nearly $1 million in prices realized, Stack’s Bowers Galleries’ sale of the Lulu Collection represents the single most important public offering of Short Set dates. Results from this collection contributed to over $7.8 million in prices realized for the firm’s June 2021 Auction, the first to be hosted at the state-of-the-art auction gallery and studio in their Costa Mesa, California headquarters. With such stellar results to kick off the summer auction season, the firm is now looking ahead to their official auction for the ANA World’s Fair of Money in August, which will showcase further selections from the Lulu Collection, as well as incredible rarities such as the finest 1804 dollar, a newly discovered 1794 dollar, an original 1827/3 quarter, a Mint State 1796 Stars quarter eagle, and much more. To consign to the August Auction or for questions about the Lulu Collection, please contact Stack’s Bowers Galleries by telephone at 800-566-2580 or by email at Info@StacksBowers.com.