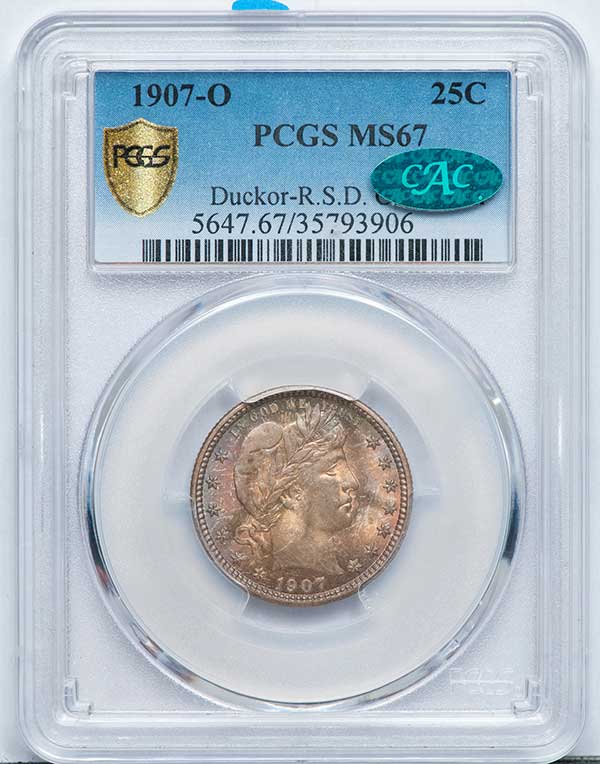 Beverly Hills, world famous for its high-end boutiques, proved to be a great venue for a boutique auction full of high end rare coins. The 491-lot auction drew record n

Beverly Hills, world famous for its high-end boutiques, proved to be a great venue for a boutique auction full of high end rare coins. The 491-lot auction drew record numbers of bidders, and the prices more than proved that fact. Important coins from numerous collections, including the Maybach Collection of Buffalo Nickels, the Formula 1 Collection of Barber Half Dollars, the Star City CAC Morgan Dollar Collection, the Sand Hill Collection, and Symphony Collection, all contained highly collectible and sought-after coins that appeal to collectors at all levels, resulting in tens of thousands of views.

The top price in the sale was the Eliasberg-Duckor-Bella-A&A 1909-D Saint Gaudens double eagle in PCGS MS67 CAC, which realized $329,000, smashing any and all previous records for the date in any grade (this and all prices mentioned include the 17.5% buyer’s premium).

“The bidding activity really picked up in the final days before the sale went live,” explained Julie Abrams, “this did not abate at all during the auction, as we had a record number of bidders participating live during the sale. We also have smashed participation records of all kinds. We are very pleased with the results of our first ever standalone auction, the numbers tell the story best. Just look at these extremely impressive results,” as seen below:

Julie Abrams continued: “2019 is looking to be a fantastic year for LRCA if the outcome of the Regency 30 is any indicator.”

Legend Rare Coin Auctions’ founder, Laura Sperber added, “There seems to be real life after the FUN show. Collectors were as enthusiastic as we have ever seen them, and the record bidding is a clear testament to that. We really feel that the market for high-end quality coins is only getting stronger.”

Sperber also said that feedback from bidders and consignors was great, “one collector commented after the auction concluded that he was very impressed that there were so many record prices realized, especially for the Formula 1 Barber halves.”

Legend Rare Coin Auctions is now accepting consignments for Regency Auctions 31 and 32. Regency Auction 31 will be anchored by the Young-Dakota Collection (a collection of mostly 19th-century and early 20th-century proof coins, including original matched sets, some of the finest Barber quarters graded by PCGS, and a Gem branch mint proof 1893-CC dollar. The sale will also feature the Prospect Collection of gold coins. The consignment deadline is February 4, 2018. Contact one of Legend’s consignment specialists today by calling Julie Abrams at 845-430-4378, Greg Cohen at 732-935-1168, or Jessica Berkman at 214-909-7732.

Legend Rare Coin Auctions is a boutique numismatic auction company specializing in the finest and rarest U.S. coins. Founded in 2012 by Laura Sperber, the owner and president of Legend Numismatics, the premier rare coin retail firm. LRCA was, from the outset, designed to be a different kind of rare coin auction firm. LRCA’s staff of numismatic auction industry veterans includes Julie Abrams, president; Greg Cohen, senior numismatist; and Jessica Berkman, consignment coordinator. The firm’s Regency Auctions serve as the official auction for the PCGS Members’ Shows, held six times per year. Since its founding, LRCA has sold many important collections, resulting in world-record prices, including the Coronet Collection of Morgan Dollars (#1 all time PCGS set); the David Hall—Bob Simpson Collection of Liberty

*Photograph above is courtesy of Legend Rare Coin Auctions