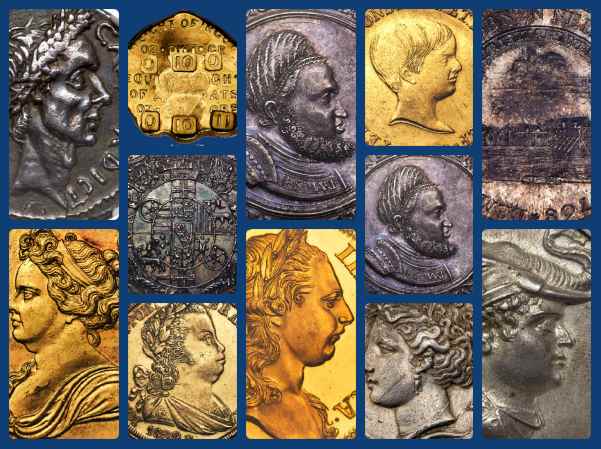 The three that led the event:

“Mint state gold from Anne’s historic reign is a rare sight,” says Cris Bierrenbach, Executive Vice President of International Numismatics at Heritage Auctions, “and to have these two impressive pre- and post-Union 5 Guineas in a single auction is truly spectacular.”

A George V Penny 1933 MS63 Brown NGC closed at $240,000, which broke the previous record of $193,875. This magnificent coin is among the great 20th century rarities not only within the greater British series, but across world numismatics as a whole, similar to the fame demanded by one of the most hotly contested U.S. issues, the 1943 Lincoln cent. It is struck from a reported mintage of just seven pieces, three of which were provided to the University of London of Bloomsbury, St. Mary’s of Hawksworth Wood (this coin) and the Church of St. Cross of Middleton for internment in foundation stones.

A seldom-seen Charles II gold Proof Pattern Crown 1663 PR58 PCGS brought a winning bid of $228,000. A fantastic milled rarity struck in the earliest years of Charles II’s reign, it is even more scarce than the 1662 Pattern Crown Heritage Auctions handled in 2021 as part of the Paramount Collection. It is designed by Roettiers, who quickly became one of the Royal mint’s chief engravers and later produced pieces for James II, William II and Mary until his death in 1703. This coin represents the pinnacle of Roettiers’ abilities, utilized on an expansive golden canvas with Charles II’s iconic and sensitively rendered draped and laureate bust portrait. Only a single example of this Pattern has come to market in recent decades, when this lot was offered in Heritage Auctions’ 2019 NYINC auction, in which it was among the top highlights.

Numerous records were set in the auction. In addition to the George V Penny 1933 MS63, the list of new records includes, but is not limited to:

The auction also featured several elite collections, including the Petropolis Collection made a return appearance at Heritage Auctions – in this case for the 164-lot third installment of this extraordinary collection.

Also featured was the Cape Coral Collection, Part II , a trove of elite German coins. The assemblage is one of the finest collections of German coins, many of which are world-class trophies, massive in physical size and in their significance among serious collectors. Among the highlights from the collection: