Künker’s Spring Auctions Sales were held from 21 to 25 March and from 4 to 6 April 2022. They will go down in the company’s history as the auction week with the highest turnover that was ever achieved. In this review, we present the Top Five of Celtic, Greek and Roman coins.

On 6 April 2022, the Künker auction house made history: at 9 p.m., they closed the auction week with the highest turnover that was ever achieved in the company’s history. With a total estimate of about 9 million euros, the hammer prices of auction 361 to 367 added up to more than 20.5 million euros! An impressive result that was also due to the enormous success of the three auctions with ancient coins.

We present the Top Five of the following four areas:

MONEY OF THE CELTS – The Flesche Collection

It was one of the most important collection of Celtic coins – the Flesche Collection, which was sold on 5 April 2022 at Künker. In collaboration with Alois Wenninger, the collector Christian Flesche had succeeded in compiling an ensemble of outstanding coins from the entire Celtic world, from Britain to Colchis. He was a true collector, i.e. his collection contained both, common types that can be bought for two-digit sums as well as really expensive issues. We present the Top Five: the Celtic coins that realised the highest results on 5 April 2022. In case of two pieces realizing the same result, we ranked them according to the difference between estimate and hammer price. 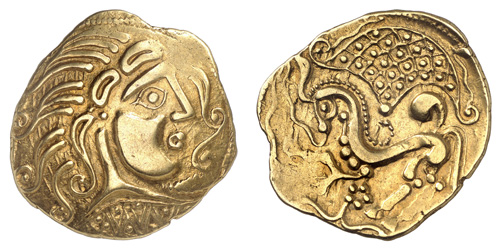 In 5th place is one of the favourites of collectors who pay utmost attention to artistic criteria: the Parisii gold stater is considered an abstract masterpiece that can well be compared to a Picasso. This coin type always achieves five-digit prices, in this case the specimen jumped to 46,000 euros. 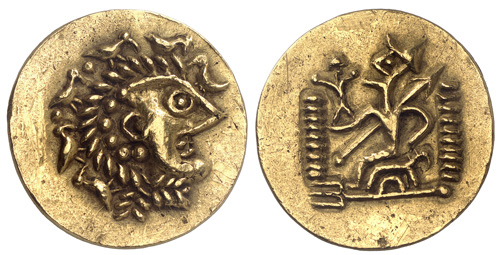 In 4th place we have a gold stater from the 2nd / 1st century BC from Colchis. In the region where Georgia is today – and back then in immediate vicinity of the Persian Empire – nomads from the north settled and founded their kingdom as early as in the 6th century BC. Coins like the gold stater sold by Künker combine the stylised motif of the Lysimachus gold stater with local elements, i.e. with six birds that gather around the head on the obverse. The inhabitants of Colchis placed gold staters like this one in the mouths of the deceased. The buyer was prepared to bid 46,000 euros on the magnificent specimen offered by Künker. 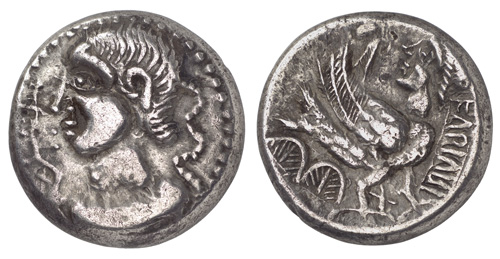 As of 400 BC, Bratislava was an major centre of the Boii and we know from archaeological finds that an important mint was active there. Today’s numismatist believe that the Republican denarii became the model of Boii coinage and that the names that can be found on Boii tetradrachms denote administrative officials who organised the coin production on behalf of the council of elders. Celtic engravers imaginatively transformed the motifs of Roman denarii into their own depictions. The harpy on the reverse of the tetradrachm of Fariarix, for example, is reminiscent of the human-headed owl that can be encountered on the denarii of L. Valerius Acisculus issued in 45 BC, and of the sphinx on denarii by T. Carisius from 46 BC. This impressive piece was worth 48,000 euros to its new owner. Therefore, it made 3rd place in the Celtic Top Five.

In 1936, Karl Pink described the first specimen of this coin issue as “type with inverted laurel wreath and arabesque curl”. The “inverted laurel wreath” nicely illustrates what happened when Greek images were translated into Celtic numismatics: the tetradrachms of Philip II, which were used by Hellenistic rulers to pay their Celtic mercenaries, inspired Celtic engravers. Unfortunately, they did not understand what the motifs were supposed to mean. They did not know that a laurel wreath is always put on in such a way that its leaves point forwards. Therefore, they committed the “mistake” of depicting the laurel wreath in an “inverted” manner – which is quite amusing to us today. This issue, which teaches us so much about how to understand Celtic art, realised a hammer prize of 50,000 euros. It made thus 2nd place in Künker’s Celtic Top Five. 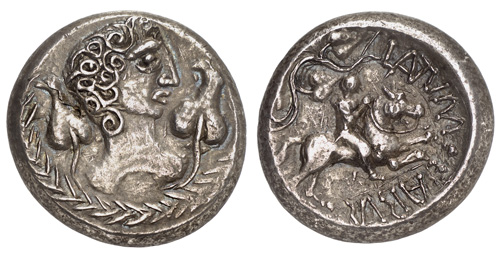 The most expensive Celtic coin of the auction was another Boii tetradrachm sold for 65,000 euros. It was signed by the official Iantumarus. The specimen depicts a bust between two large, fleshy leaves on the obverse, a horseman on the reverse. What’s remarkable about the motif is the fact that the Celtic engraver adopted another idea of his Roman colleagues by combining three letters of the long name “Iantumarus” to form a ligature. At 65,000 euros, this pieces is the most expensive Boii tetradrachm ever sold.

Greek coinage could be discovered in no less than two catalogues of the second part of Künker’s Spring Auction Sales. Particularly the Dr Guy Sylvain Paul Bastin Collection impressed with exquisite provenances, which is why there were quite a few remarkable results. The market confirmed that coins of fine style achieve an even higher result when they come from an old auction sale or a renowned collection. At this point, once again we limit ourselves to the Top Five Greek coins from auction 365 and 367.

In 5th place, with a hammer price of 34,000 euros, we can find one of the most popular coin types of ancient Sicily: the human-headed bull of the city of Gela depicted on a tetradrachm minted between 450 and 440. 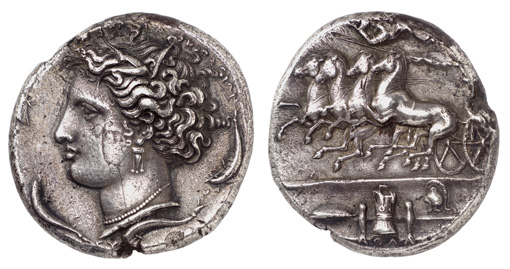 The 4th place is occupied by a decadrachm of the city of Syracuse from the Lucien Mellerio (1879-1943) Collection. He came from an ancient family of jewellers who have had their shop in Paris since 1515(!) and whose creations can still be bought today in the Rue de la Paix. 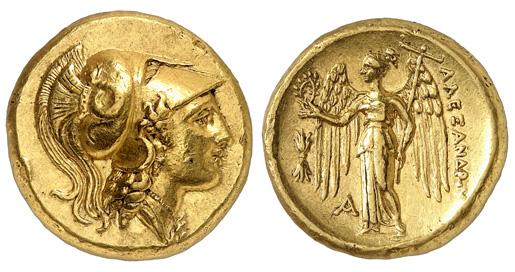 Double staters of Alexander III are rare and accordingly sought-after. Thus, it was to be expected that this about extremely fine distater would achieve a high result – but a hammer price of 70,000 euros certainly was a pleasant surprise. This makes it 3rd place of our Greek Top Five. 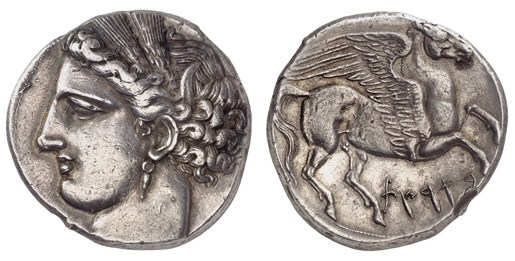 There’s another decadrachm among the most expensive Greek coins, a Siculo-Punic specimen from an unknown Sicilian mint. The piece was sold for 75,000 euros and made thus 2nd place. 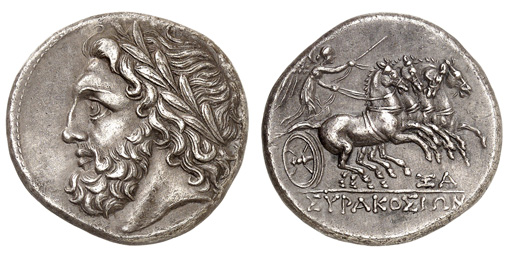 The most expensive Greek coin of Künker’s Spring Auction Sales is a true dream piece: of the finest style, of the greatest rarity, utmost historical importance, on a large blank with wonderful toning. The 16 litrae coin, which was among one of the last issues of the free city of Syracuse before the Romans conquered it during the Second Punic War, is a specimen collectors dream about. One of them made his dream come true. He had to submit a bid of 95,000 euros for it.

Coins of the Roman Republic

They are considered a popular, still relatively inexpensive field of colletion: coins of the Roman Republic, featuring motifs that we know from our Latin textbooks. Nevertheless, there are also many specimens that achieve top prices. This is demonstrated by our Top Five results realised by coins of the Roman Republic in Künker’s Spring Auction Sales. Examples for such specimens could be found in three places: in the general auction sale 365, in the Dr Guy Sylvain Paul Bastin Collection and the Dr W R Collection.

It is one of the rarest denarii of the Roman Republic, the denarius of M. Valerius Messalla featuring a Sella Curulis on the reverse – the legendary folding chair on which Roman consuls sat when they held office. We know both the monetary official Marcus Valerius Potitus and his father Marcus Valerius Messalla Rufus, who is mentioned on the reverse of the coin, from history: the father was accused of illegal acts connected to the elections, the son was one of the leading politicians of the civil wars. He backed Octavian in good time and made a career for himself. As consul, in 29 BC, he offered the sacrifice on behalf of the senate and the people of Rome on the occasion of Octavian’s happy return after defeating Antony and Cleopatra. Its new owner was prepared to pay 12,000 euros for this denarius. Therefore, it is our 5th place. 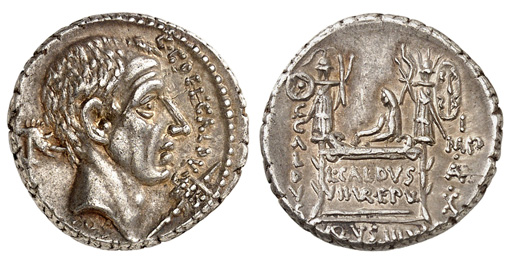 Anyone who read the epoch-making work “The Power of Images in the Age of Augustus” by Paul Zanker knows this coin. By means of this coin type, the archaeologist illustrates that common Roman citizens were no longer capable of understanding the increasingly complicated allusions on Roman coins. In fact, the specimen offered at Künker is probably the piece of the best quality of this rather rare issue. Thus, it’s no surprise that Alberto Banti and Götz Lahusen used this very specimen – which on top of that comes from the Bank Leu auction 17, which is legendary for every collector of Roman Republican coins – to illustrate the coin type. With a hammer price of 13,000 euros, this coin made 4th place of our Top Five.

There is a coin of the Roman Republic that always sets new records: the denarius with the portrait of a Gaul, which used to be thought of as Vercingetorix in the past. The head has portrait-like features, the spiky hair is styled back with lime water; this Gaul has always captured the imagination of coin collectors. It was sold for 14,000 euros. 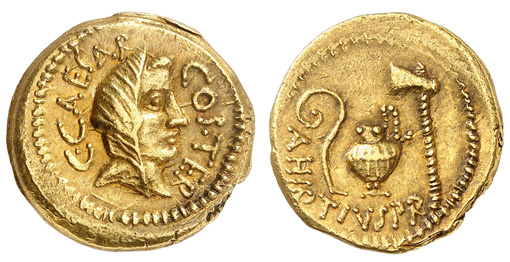 At 16,000 euros, the 2nd place of our Top Five of the Roman Republic is an aureus of C. Iulius Caesar by A. Hirtius. 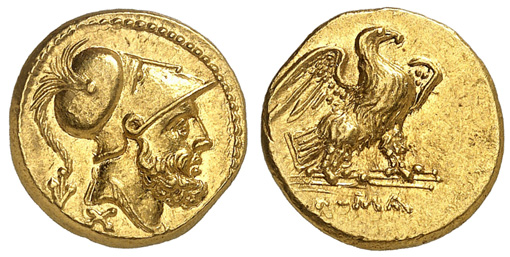 It is among the rarities of Roman Republican coinage, the gold 60 asses piece minted during the great monetary reform that introduced the Roman denarius. Due to the large blank, the high relief and the delicate style, the piece offered at Künker is one of the best specimens known from this series. It was sold for 20,000 euros and conquered thus the 1st place of the Top Five of Republican coins sold in Künker’s Spring Auction Sales.

Coins of the Roman Imperial Period

Let’s conclude this review with the Top Five Roman coins from the Spring Auction Week. 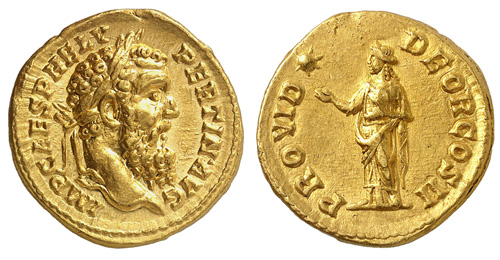 With a hammer price of 40,000 euros, an aureus of Pertinax of about extremely fine quality came in 5th place.

A favourite piece of all collectors of Roman coins is the sestertius of Nero with the detailed depiction of the port of Ostia. At Künker’s auction, it was sold for 42,000 euros.

An aureus by Vitellius, whose provenance can be traced back to 1946, changed hands at 46,000 euros. This makes it 3rd place of our Top Five.

One of the specimens of the highest quality in this series is the double sestertius by Herennia Etruscilla from the collection of a connoisseur. The hammer price was 55,000 euros, making it 2nd place of our Top Five. 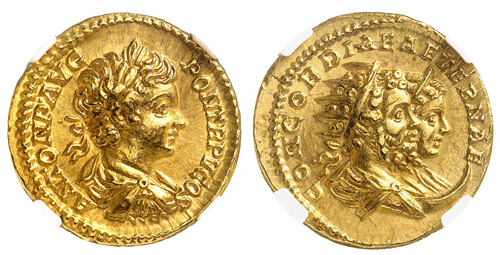 The highest price for a Roman coin was achieved by an aureus that combines three portraits at once. Septimius Severus had this coin minted for his son Caracalla featuring the co-ruler on the obverse, father and mother on the reverse.

Although only high-priced specimens were featured in this review, there were many coins in the auction sale that could be bought for relatively little money. Take a look at the auction results and see for yourself. After all, coin collecting is a rewarding hobby for everyone!