When it comes to the top-money Jefferson nickels, the presence of “Full Steps” details is key. Some issues from the 1980s are amazingly difficult to find. 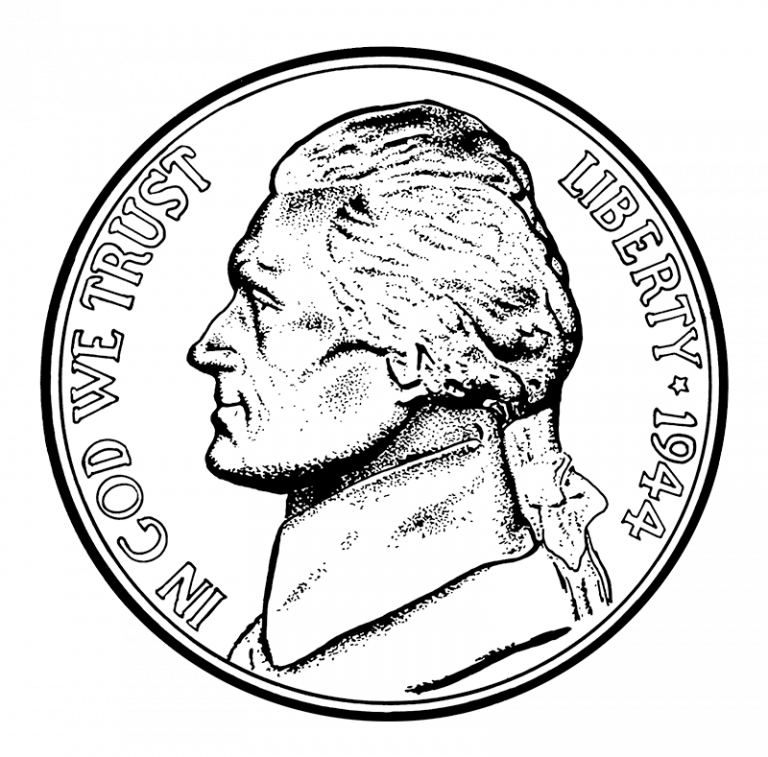 Jefferson nickels have slipped under the radars of coin dealers and collectors for years, with many proclaiming the current five-cent coin series a “sleeper.” It’s one of the few current, long-running series of which a complete collection remains possible to build from circulation with enough patience.

This, thanks to many of the semi-keys and even the various 35% silver wartime issues (struck from 1942-45) occasionally floating around from pocket to pocket, purse to purse, or roll to roll with little notice from non collectors and relatively scant attention from even many collectors who mistakenly think there’s little of value worth saving from the series. Perhaps even fewer numismatists still realize that it’s virtually impossible to find some dates in MS66 or higher with all five or six steps intact at the base of Monticello on the reverse.

The Jefferson nickel is by no means a challenging series for typical collectors hoping to fill coin folders or coin albums with circulated examples or run-of-the-mill uncirculated specimens. However, diehard registry set enthusiasts hoping to complete a collection of certified Jefferson nickels in the highest grades have a much more trying—and expensive—objective on their hands. For many issues, there simply are few—and often—no survivors with Full Steps details above MS66 or MS67. Even some non-FS Jeffersons are unknown in grades as “low” as MS67.

WHY ARE FULL-STEPS JEFFERSON NICKELS SCARCE?

What is it about Full Steps Jefferson nickels that make these coins so difficult to find? Bill Fivaz, who contributed to A Guide Book of Buffalo and Jefferson Nickels (Whitman 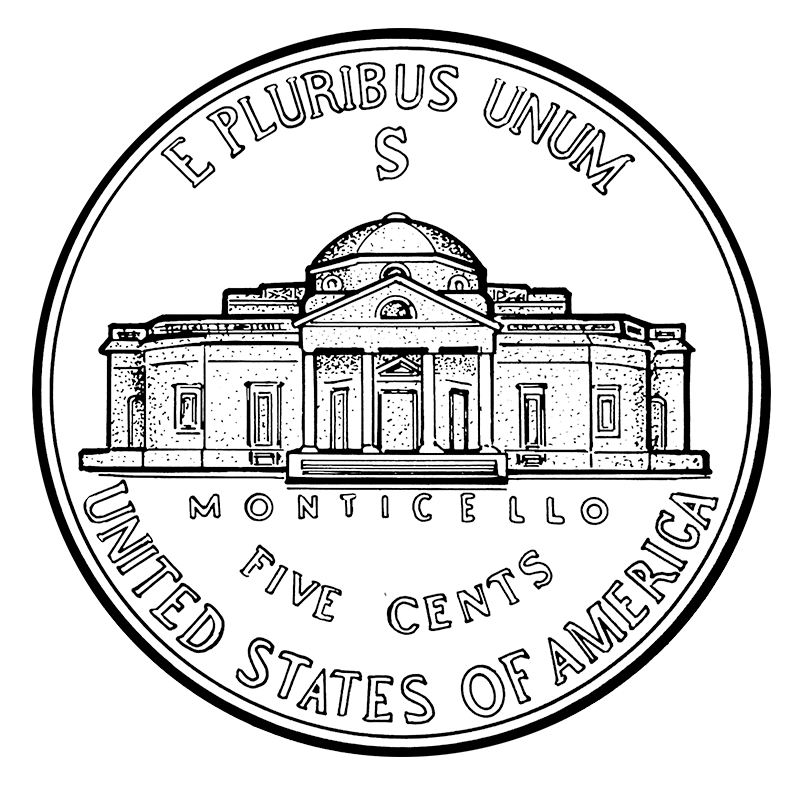 Publishing, 2007), says high-grade Jefferson nickels are elusive for many reasons.

“First, the hardness of the 75%-25% copper-nickel composition does not lend itself well to quality strikes,” explains Fivaz. “Also, in many cases the dies were used well past their effectiveness, resulting in ‘mushy’ and clouded features of the design(s) and an ‘orange peel’ look in the fields, which is a characteristic of coins struck by eroded dies.” Thus, “collectors should be aware that many, if not most, of the dates from 1938 through 1970 are very difficult to locate with ‘Full Steps.’”

What exactly are “Full Steps”? “The original design of Monticello on the reverse of the Jefferson nickel had six steps, with the Variety 1 (1938 and some 1939 issues) being characterized as having ‘wavy’ or rather ill-defined steps,” Fivaz notes. “Mintages after this have well-defined, straight and easy-to-count steps. It is important to understand that the count starts with the top (porch) step, and proceeds downward to the bottom one.” He says some Jefferson specialists establish step counts by counting the incuse lines between each step, with four unbroken lines equating a five-step coin whereas five undisturbed lines make a six-step specimen.

“A coin is generally considered to qualify for the Full Steps designation if it has five complete steps with no nicks, cuts, abrasions, or weakness to interrupt the step count,” Fivaz explains. “Because the definition of the steps in this series is a function of the quality of the strike, the weakness problem area always occurs beneath the third pillar of the building. This is undoubtedly due to the deepness of the hair design on the obverse directly opposite this area, which ‘steals’ planchet metal to fill that portion of the die.”

Fivaz says every Jefferson nickel is “supposed” to exhibit six steps. “Due to the striking issue and prolonged die use, these are rare except on some of the Denver mint issues from 1940 through 1945. ‘Five Steppers’ are especially challenging to locate from the San Francisco coins of this era.” In the end, the presence of a sixth step is generally regarded as the exception, and not the rule, when identifying a Jefferson nickel as an “FS” specimen. “Because five steps qualifies a coin as being ‘Full Steps,’ the sixth step is considered a bonus and in most instances may command a premium.”

When it comes to the top-money Jefferson nickels, the presence of “Full Steps” details is key. Fivaz notes there are many dates in the series that are well known to be weakly struck and thus are exceedingly rare when encountered with full strike and/or full steps. “The two most widely known are the 1953-S and 1954-S,” he says. The former counts just 1 PCGS MS66 FS specimen and 3 in MS65 while the latter has just 1 each in MS66 FS and MS67 FS in PCGS plastic—and they’re all five-figure coins.

“However, there are several others that could be considered ‘second-tier’ rarities that a few more collectors are aware of that bring big bucks in slabbed MS65 ‘Full Steps’ condition. A couple of these are the 1944-S and especially the 1945-S silver issues.” The 1945-S is the most challenging of all the wartime issues to find in Full Steps. According to Fivaz, a PCGS MS65+ FS 1945-S recently sold through Great Collections for $685.00, hardly a surprising figure given PCGS has graded only 63 Full Steps specimens in MS65 and just 118 with the MS66 FS designation. The top grade of MS67 FS has been awarded to only 16 examples in PCGS slabs.

Many dates from the 1960s, a period of relative modernity in the numismatic sense, yielded some of the toughest conditional rarities of the entire Jefferson nickel series. “Not so commonly known but well worth looking for are the 1960-D and 1961-D dates, and even more so the 1968-D, 1969-D and 1970-D. Find one of these and you’ll be able to eat surf ‘n turf for months!” Consider the PCGS MS64 FS 1968-D, which has only a single PCGS specimen and sold last fall for a stunning $2,450.

“There are several other late date ‘sleepers’ that you should look for that the registry set boys passionately vie for in auctions and on the internet. Slabbed MS65 and especially MS66 issues are tough, such as the 1976 (Philadelphia) PCGS MS66 FS, with a population of 13, which sold through GreatCollections earlier this year for $580.00. Adds Fivaz, “so please don’t discount these ‘common’ coins in top condition!”

TOP-FLIGHT JEFFERSONS SLIDE UNDER THE RADAR

In many instances, such conditionally scarce—even rare—Jefferson nickels are simply disregarded by individuals who give nary a thought to scouring modern business-strike coins for good surfaces and strong strike details. Yet, it’s well-struck Jefferson nickels that are among the most valuable class of moderns, similar to “Full Torch” or “Full Bands” Roosevelt dimes, which are also grossly uncommon.

Consider the situation with Jefferson nickels struck during 1982 and 1983, when federal budget cuts brought a halt to the United States Mint’s uncirculated set program and a deep recession pushed many budget-constrained collectors into spending their rolls of late-date uncirculated coins on food and rent. Relatively few Jefferson nickels from that period were saved, and of the four business-strike issues from those two years, only a handful of PCGS specimens from either the Philadelphia or Denver Mint grade as high as MS67, with only 1 PCGS-encapsulated representative each for the 1982-P and 1983-D, 4 for the 1982-D in MS67 and 1 for that same issue with “Full Steps,” and no MS67s of any classification for the 1983-P. MS65 and MS66 specimens with Full Steps details from 1982 and 1983 regularly trade in the low to mid hundreds of dollars each.

Meanwhile, MS67 FS Jefferson nickels of even more recent vintage are snagging respectable four-figure prices, such as the only known PCGS MS67 FS 1985-P that took $3,120 in a January 2018 Heritage Auctions sale. Eclipsing that figure is the 1992-D PCGS MS67 FS (population of 3), which claimed $3,760 in a 2016 Heritage event. As with any era of Jefferson nickels, overall strike quality and preservation for the various 1990s issues vary from year to year. For example, PCGS has graded 2 1994-P Jeffersons with the rarely bestowed MS70 FS designation, and these have an estimated retail value of about $4,500. Yet, no 1998-D Jefferson is certified by PCGS in a grade higher than MS66. Only a single 1999-P PCGS MS68 FS exists, and it traded for $4,465 in a 2016 Heritage Auctions sale.

The bottom line? Top-grade Jefferson nickels deserve more attention from coin dealers and coin collectors alike. “The Jefferson nickel series is a very interesting and rewarding area, especially if you know what to look for and if you have a good grading eye,” Fivaz remarks. “I might suggest that you peruse the top third-party grading services’ population and pricing reports on their websites to acquaint yourself with those dates that have the most potential and desirability. I guarantee that it will pay off for you!”

The 1982 penny weighing 3.1 GM's is worth$$$ even in circulated grades been searching for a long time and weight every 82 I come across.