"Buy the book before the coin." Sage advice if there is a book to buy. Every coin series in U.S. history has a book dedicated to it except one, Classic Gold. Minted from 1834 to 1839 and falling between the series of the old standard preceding it and the newer series that followed, Classic Gold quarter eagles and half eagles are betwixt and between. No comprehensive and authoritative reference guide has been written about these beautifully designed coins. Their story has never been told, until now. 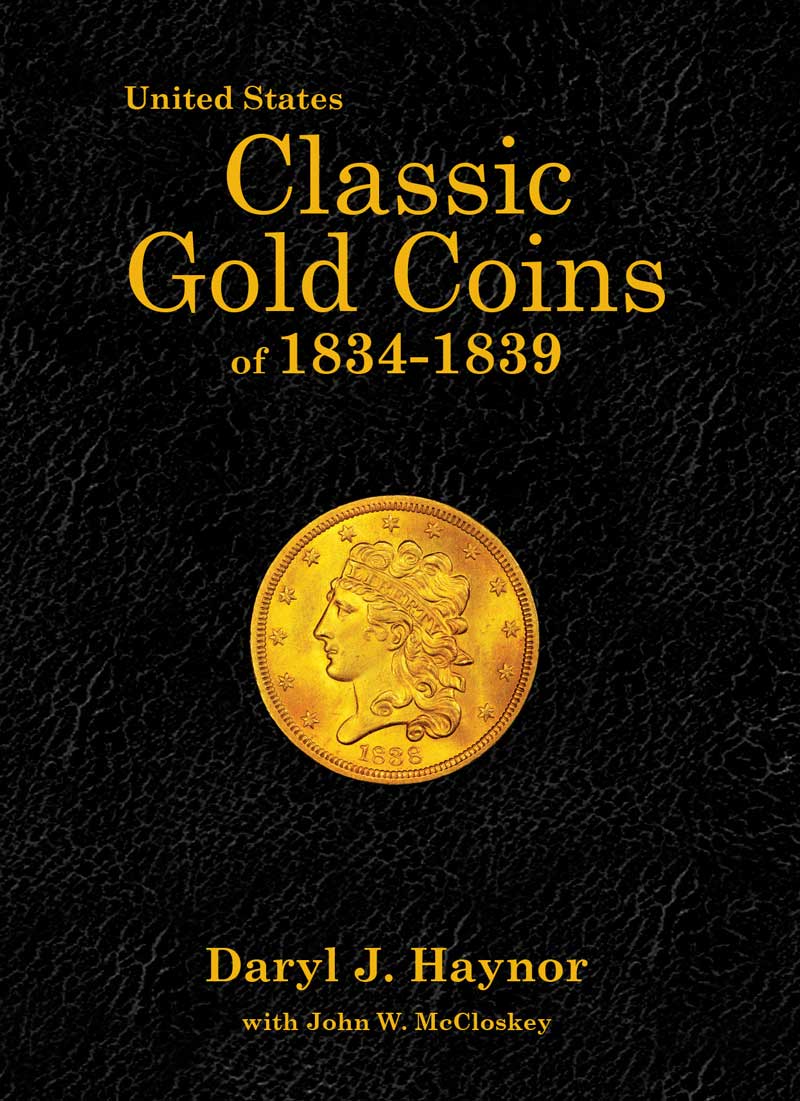 United States Classic Gold Coins of 1834-1839, a book written by Daryl J. Haynor, presents information about every aspect of the Classic Gold quarter eagle and half eagle series that a collector needs to knowledgably and confidently collect them. The work assembles for the first time a complete die marriage listing for every date in each series, emission sequencing, and a detailed system for identifying marriages with high quality color photographs. Rarity ratings of each die marriage are given, backed by an exhaustive search of thousands of records of gold coin sales.

The book includes an analysis of the characteristics of Classic Gold coins by date, including luster, color, strike, and other die characteristics. It provides estimates of the survivors of each date broken down by grade ranges based on statistical analysis of third- party population reports and auctions. It also documents reasons why several official mintage figures of the U.S. Mint need to be adjusted.

Mr. Haynor has conducted an exhaustive study of the finest examples of each date, and a condition census list with detailed provenance records is included. In many cases this information will be published for the first time. Most listings include high quality color photos.

But Classic Gold is much more than a reference book. The 1830’s was perhaps the most dynamic decade in the history of the U.S. Mint, and economically one the most traumatic for the country. The book explores the economic and political context of the 1830's by "following the money" through these turbulent times, including President Jackson's push for a bimetallic monetary system, the Second Bank Wars and its ultimate demise, and changing the gold standard. It chronicles the role of the gold in French indemnity payments, the relocation of Native Americans, and the Panic of 1837. And it explores U.S. Mint operations which went through big changes during that decade, including the introduction of the steam toggle press, the opening of the new Philadelphia Mint, Christian Gobrecht’s arrival as Engraver, and the construction of branch mints in Charlotte, Dahlonega, and New Orleans.

Classic Gold coinage was the tool Jackson used to implement his financial policy based on specie. It was the first coinage under a new gold standard, the first to create a public uproar over the omission of E PLURIBUS UNUM on U.S. coinage, the first coinage struck at the Branch Mints, and the first U.S coinage with a mintmark on the obverse.

The historic section of the book is based on hundreds of hours of research involving documents probably never read by anyone with a numismatic interest for two hundred years. The book includes facsimiles of many exciting and never before published archival documents such as a new allegorical drawing by Engraver William Kneass of Miss Liberty, a letter from President Andrew Jackson accepting the first Classic Head gold coin minted, and Gold Bullion Mint Certificate No. 1 issued by the Charlotte Mint on the first day of operations.

Classic Gold includes many other documents for the first time, including those surrounding the striking of rare Proof Classic Gold coins. The book includes an analysis of these coins, detailing their provenance and telling stories of some of their most famous collectors, featuring the King of Siam Presentation Set which is perhaps the most famous and most valuable set of U.S. coinage ever assembled.

The book will debunk some widely accepted tales of numismatic history that are not accurate, but are “numislore”, that: old tenor gold was melted in masses by the U.S. Mint as a result of changing the gold standard in 1834; E PLURIBUS UNUM was removed, as well as the cap from Miss Liberty, in order to distinguish the change in weight of U.S. gold coins; in 1835 Christian Gobrecht took over all activities as engraver after the debilitating illness of William Kneass.

This work contains valuable materials gathered by John McCloskey, respected author of works on other coin series, whose ground-breaking articles about Classic Gold aroused Mr. Haynor’s interest. Mr. McCloskey researched Classic Gold for over twenty years. He discovered and reported new die marriages, and many had been eagerly awaiting his book. Unfortunately, Mr. McCloskey passed away in 2018, but his family has generously turned his materials over to Mr. Haynor. His seminal research will be acknowledged and memorialized through the naming regime of die marriages detailed in the book.

Mr. Haynor has been an avid collector for decades. He has compiled a collection of Classic Gold that is the finest ever known, and is near completion of the first ever collection to include every die marriage in both series. He would have found a book like this one invaluable, but none existed. Instead he was compelled to undertake a rewarding but at times arduous research over twelve years into all aspects of Classic Gold. He is now prepared to pass on this knowledge in one comprehensive work so that collectors finally will be able to “buy the book before the coin.”

The hardbound book is 368 pages in length, printed in full color with over 700 full color high-resolution illustrations. United States Classic Gold Coins of 1834-1839 by Daryl J. Haynor, with John W. McCloskey, is available from Wizard Coin Supply at Wizardcoinsupply.com. The book is priced at $95, but is now available for a limited time at a discounted pre-release price. A limited-edition version of only 75 copies is priced at $195.