Stack’s Bowers Galleries is excited to present a newly discovered 1794 Flowing Hair silver dollar in their official auction for the 2021 ANA World’s Fair of Money this August. 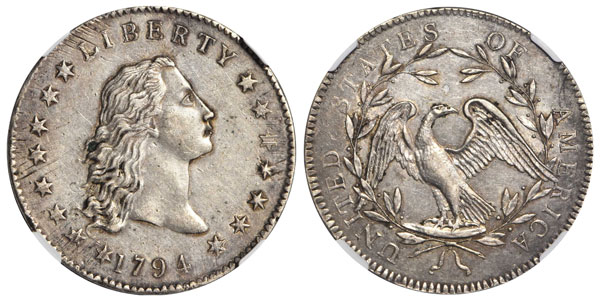 Authorized by the Act of April 2, 1792, the 1794 Flowing Hair is among the most important silver dollars ever struck by the United States Mint, serving as the prototype for the unit upon which America’s monetary system would be based.

Authorized by the Act of April 2, 1792, the 1794 Flowing Hair is among the most important silver dollars ever struck by the United States Mint, serving as the prototype for the unit upon which America’s monetary system would be based.

Costa Mesa, CA -- Stack’s Bowers Galleries is excited to present a newly discovered 1794 Flowing Hair silver dollar in their official auction for the 2021 ANA World’s Fair of Money this August. Discovered in an accumulation by a southern UK dealer over 25 years ago, this piece is a newcomer to the census of known examples and was only recently authenticated with the assistance of Stack’s Bowers Galleries. It subsequently received a grade of AU-55 from NGC and approval by CAC, ranking it among the most significant survivors of this historic issue.

Authorized by the Act of April 2, 1792, the 1794 Flowing Hair is among the most important silver dollars ever struck by the United States Mint, serving as the prototype for the unit upon which America’s monetary system would be based. It was prized by collectors immediately upon striking and has been honored with the No. 3 ranking in the fifth edition (2019) of the influential reference 100 Greatest U.S. Coins by Jeff Garrett and Ron Guth. With a mintage of just 1,758 pieces, the 1794 Flowing Hair silver dollar is a coin of which legends are made.

Stack’s Bowers Galleries has presented a 1794 silver dollar at auction nearly 40 times over the past two decades including the finest and most valuable specimens known. These offerings include six distinct sales for over $1 million including the $10 million Carter-Cardinal specimen, the $4.9 million Lord St. Oswald-Pogue example, the $2.8 million Lord St. Oswald-Norweb coin, the $1.2 million Boyd-Cardinal example, and most recently the $1.05 million Larry H. Miller coin. With the offering of this newly discovered example in their August auction, Stack’s Bowers Galleries will affirm their position as the leading experts of this rare and historic issue.

Writing in the 2010 edition of The Flowing Hair Silver Dollars of 1794: An Historical and Population Census Study , Martin Logies of the Cardinal Collection Educational Foundation accounts for a surviving population of 140 to 150 examples in all grades. While unlisted in the Logies census, this new discovery would qualify as CC#10 based on that listing. This remarkable coin is very well struck and preserved for the issue, with exceptional definition to Liberty’s hair and the stars on the obverse and nearly complete denticulation around both sides. The fields remain smooth and showcase subtle flashes of satiny luster. Just eight coins have been graded finer by NGC and only eight have been approved by CAC across all services, emphasizing the truly impressive quality of this piece.

Any 1794 Flowing Hair silver dollar is an extremely important numismatic find, and the ownership of even a low grade or impaired example is the mark of an important collection. This incredible AU-55 (NGC) CAC specimen is surely destined for an advanced collector of silver dollars or early American artifacts.

This new discovery is one of several world-class U.S. coin rarities to be featured in the Stack’s Bowers Galleries official auction for the ANA World’s Fair of Money this August, accompanying the finest known 1804 dollar, an original 1827/3 quarter, a Mint State 1796 Stars quarter eagle, and many other treasures. For questions about this exciting 1794 dollar or for more information on our August auction, please contact Stack’s Bowers Galleries by telephone at 800-566-2580 or by email at Info@StacksBowers.com.