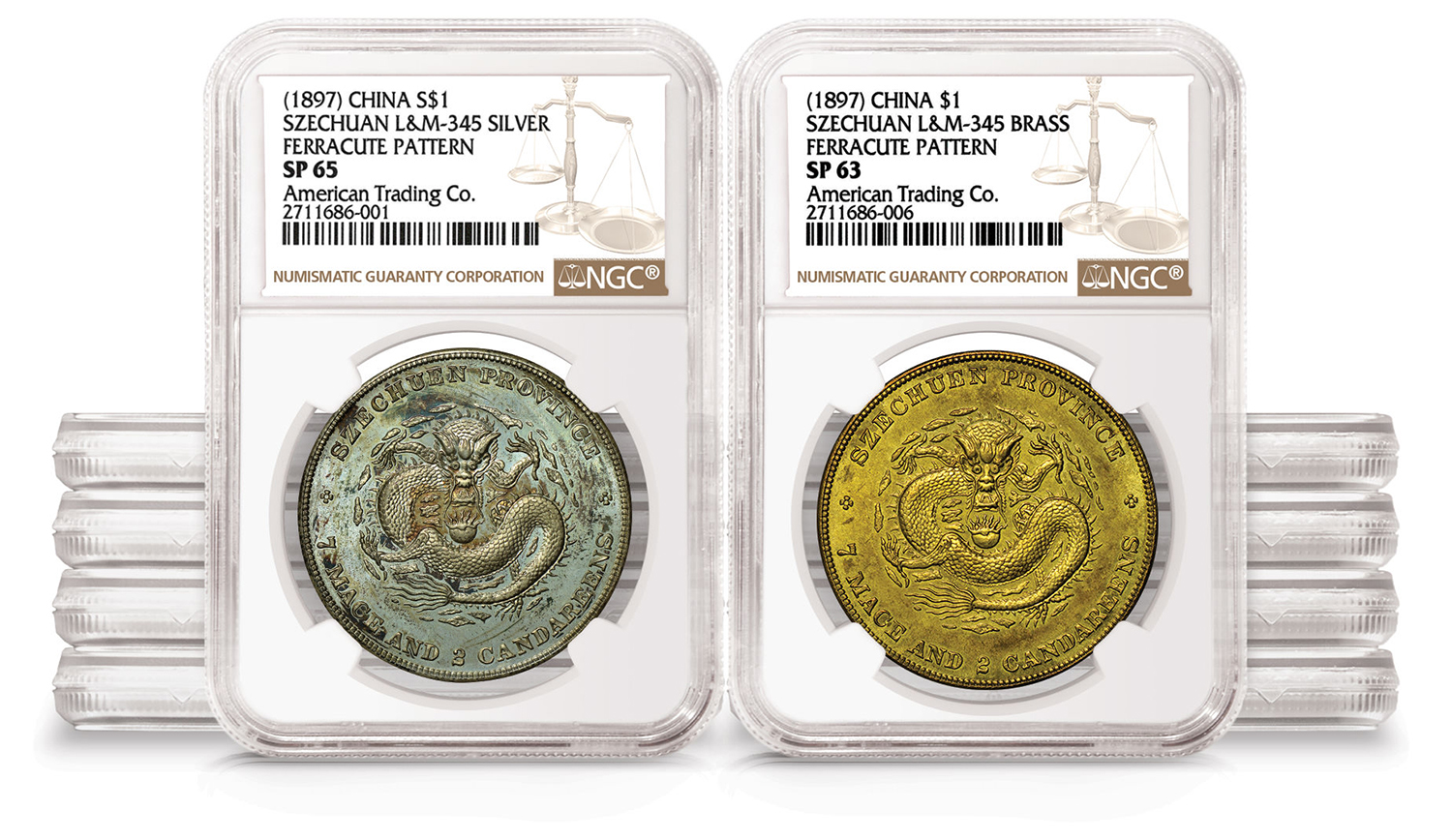 The 10 silver and brass coins in the set were sold as a single lot in the Heritage Auctions Hong Kong International Numismatic Fair (HKINF) World and Ancient Coins Signature Auction, which concluded December 6, 2019.

Only three complete 1897 Szechuan Ferracute Pattern Sets are known to exist. They were made in New Jersey by the Ferracute Machine Company during a presentation of its new coining presses for the Chengtu Mint in Szechuan Province.

A very limited number of the patterns were produced at this demonstration. (A pattern is a proposed coin design or composition.) The equipment was shipped to China the very next day, but the dies sustained significant damage on the journey and had to be re-created.

Thus, the small sample of pattern coins, placed in round wooden cases for display, became the only examples struck from the original American dies.

The set was submitted to NGC for certification in 2017 by Clark Smith, a respected world coin dealer. The 10 silver and brass coins were still in their original case, where they had been for more than 100 years. The case had protected the coins, but they were glued inside.

After conservation, the coins were authenticated, graded and encapsulated in NGC’s secure protective holders. The individual coins in the 1897 Szechuan Ferracute Pattern set are:

“Seeing this set soar to over $1 million at auction was truly exciting,” said Smith, the consignor of the set to Heritage Auctions. “The expert services of NGC and NCS undoubtedly helped to maximize the value of these extraordinary coins.”

“The Szechuan Ferracute Pattern Set was undoubtedly the centerpiece of our HKINF auction,” said Cris Bierrenbach, Heritage Auctions Executive Vice President. “Our bidders have great confidence in NGC-certified coins, a fact that is reflected by the more than $1 million paid for this set.”

Mark Salzberg, NGC Chairman and Grading Finalizer, added: “We are honored to have been selected to conserve and grade this incredible set. These coins tell a remarkable story and preserving their legacy is both our privilege and our responsibility.”

To learn more about the set’s amazing history and provenance as well as view a gallery of the coins, visit NGCcoin.com/gallery/Ferracute.

NCS was established in 2001 as the world’s first professional coin conservation service. NCS uses a variety of safe, proprietary techniques to remove harmful surface contaminants, stabilize and protect a coin’s surfaces, and improve its eye appeal. More than 1 million coins have been professionally conserved by NCS, including coins from some of the most famous collections and shipwrecks. To learn more, visit NGCcoin.com/NCS.