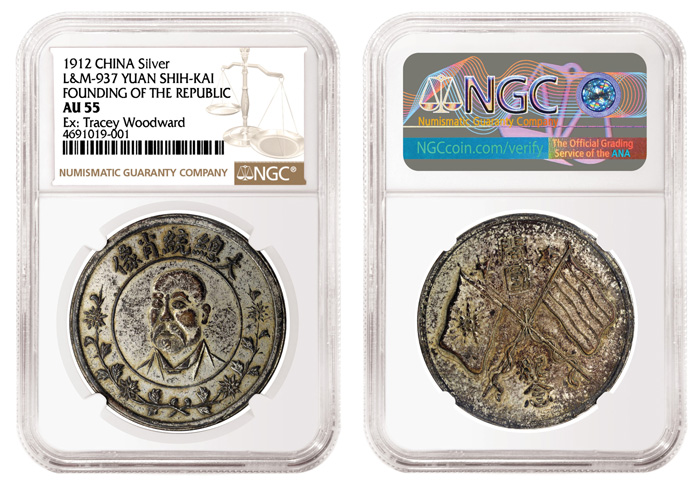 The coin was struck to commemorate the founding of the Republic, which abruptly ended centuries of imperial rule in 1912. It shows Yuan Shih-kai, who led the Republic from shortly after its founding until his death in 1916. Other coins of the era show Yuan Shih-kai with facial hair, but not to the extent on this example, giving rise to its "Big Beard" nickname.

Very few examples are known and the chance to acquire one has been scarce. This example is pedigreed to Tracey Woodward, a famous collector who traveled to China in the early 20th century.

"When an opportunity arises to purchase a great rarity like this one, collectors want to be sure the coin is genuine and accurately graded," said Ben Wengel, NGC Senior Finalizer of World Coins. "The results of this auction demonstrate the value of NGC certification."

Other NGC-certified highlights in the sale included:

Prices realized include buyer's premium. Estimates are provided by the auction house. All dollar amounts are US Dollars.

NGC is the world’s largest and most trusted third-party grading service for coins, tokens and medals, with more than 51 million collectibles certified. Founded in 1987, NGC provides an accurate, consistent and impartial assessment of authenticity and grade. Every coin that NGC certifies is backed by the comprehensive NGC Guarantee of authenticity and grade, which gives buyers greater confidence. This results in higher prices realized and greater liquidity for NGC-certified coins. To learn more, visit NGCcoin.com.