An extremely rare Edward VIII Pattern Gold 5 Sovereign certified by Numismatic Guaranty Company™ (NGC®) has realized €2.11 million (about $2.45 million), again setting a record for any British coin sold at auction. It was the top lot in an impressive sale presented by MDC Monaco that saw 22 other NGC-certified numismatic rarities realize prices over $100,000.

Highlights of the recent auction presented by MDC Monaco.

Highlights of the recent auction presented by MDC Monaco.

SARASOTA, Fla. — An extremely rare Edward VIII Pattern Gold 5 Sovereign certified by Numismatic Guaranty Company™ (NGC®) has realized €2.11 million (about $2.45 million), again setting a record for any British coin sold at auction. It was the top lot in an impressive sale presented by MDC Monaco that saw 22 other NGC-certified numismatic rarities realize prices over $100,000.

The Great Britain 1937 Edward VIII Gold Pattern 5 Sovereign graded NGC PF 67 Ultra Cameo (lot 1050) was the top lot in the auction, held in Monaco on October 20-21, 2021. Just one of two examples known to be in private hands, it previously realized a record $2.28 million at a sale in the United States in March 2021. 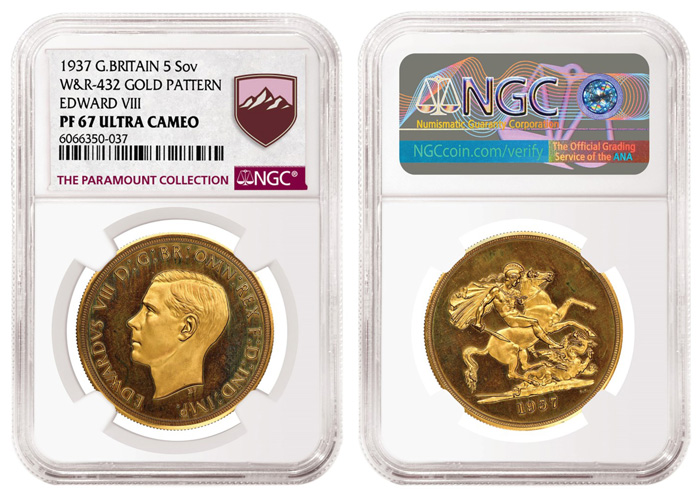 Edward VIII began his reign in January 1936 upon the death of his father, but he gave up the throne before the end of the year in order to marry a divorced American. A few proposed designs for coins, which are called patterns, were struck during his short reign. Because the coinage showing Edward VIII was never issued, these patterns are highly prized by numismatists today.

"I am proud that once again, a coin certified by NGC has achieved a new world record," said Ben Wengel, NGC Senior Grading Finalizer of World Coins. "The confidence that bidders have in NGC's trusted certification services helps coins at every level achieve their maximum potential."

Underscoring the strength of NGC's expertise in world coins, the top eight coins in the MDC Monaco sale were all NGC-certified. The second highest was a Great Britain 1820 Gold Pattern 5 Sovereign with a plain edge graded NGC PF 64 Ultra Cameo (lot 1033). It realized €750,000 (about $873,000). 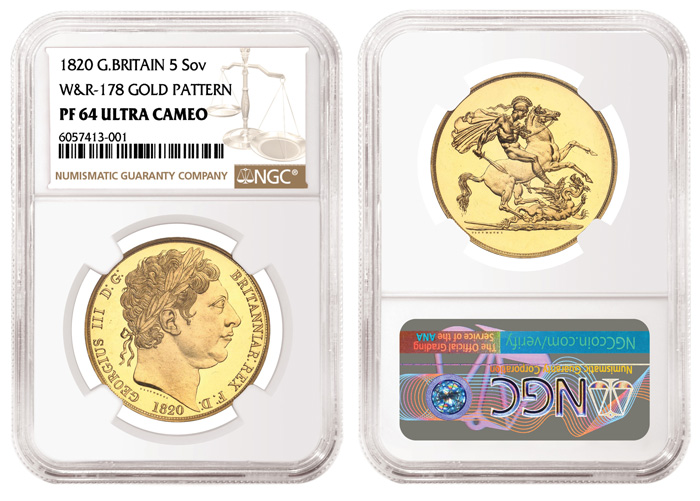 Realizing €600,000 (about $698,000) was another British gold coin, one issued during the reign of George II, the predecessor and grandfather of George III. The 1731 5 Guineas graded NGC PF 64+ Cameo (lot 1031) is the finest-graded example known of this rarity, which was issued early in the reign of King George II. 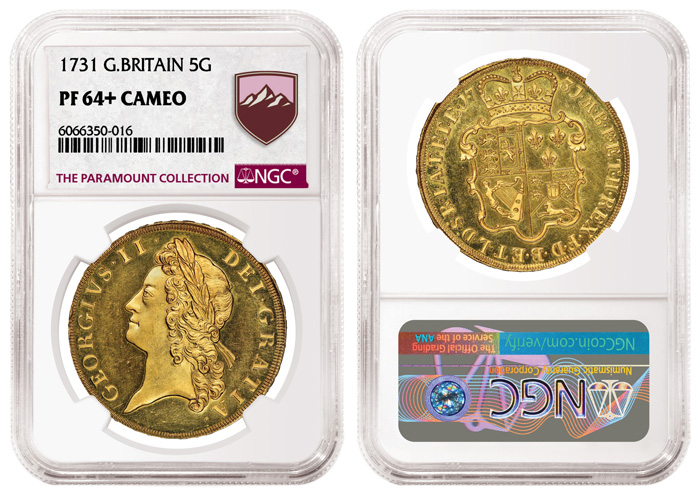 This coin, like the Edward VIII Pattern, is pedigreed to the Paramount Collection, an ambitious group of hundreds of the greatest rarities among world coins. They were sold at a Heritage Auctions sale in March 2021 and continue to make an impact in the world coin market. In fact, nine of the 23 NGC-certified rarities to realize prices over $100,000 in the MDC Monaco sale are pedigreed to the Paramount Collection.

"We are pleased that the numismatic community embraced the opportunity to acquire great rarities in this auction such as the Edward VIII Pattern," said Nicolas Gimbert, MDC Monaco Numismatic Expert. "The record-breaking price is a testament to the importance of NGC certification."

The latest sale of the Edward VIII Pattern marks the 13th time that an NGC-certified coin has realized a price over $1 million in 2021 alone. The sales have included a 1787 Brasher Doubloon that realized $9.36 million in January, which was a record at the time for any gold coin sold at auction. To explore the list, which includes extraordinary rarities from the United States, Great Britain, China and Russia, click here .

Other NGC-certified highlights in the MDC Monaco sale included:

Prices realized include buyer's premium. All dollar amounts are in US Dollars.