A China 1910 Yunnan Silver Dollar certified by Numismatic Guaranty Corporation (NGC) realized one of the highest prices ever paid for any Chinese coin. 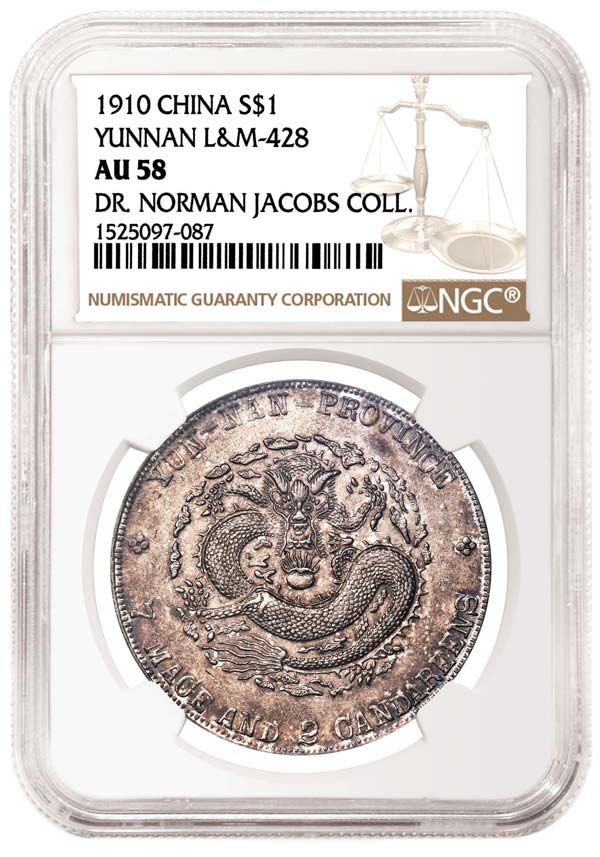 SARASOTA, Fla. (July 15, 2020) — A China 1910 Yunnan Silver Dollar certified by Numismatic Guaranty Corporation (NGC) realized an outstanding $660,000 USD at a Heritage Auctions sale June 12, 2020. This is one of the highest prices ever paid for any Chinese coin.

Commonly referred to as a "Spring Dollar, this is one of the greatest rarities in Chinese numismatics. It contains Chinese characters with a date of Spring 1910, making it the only Chinese coin to feature the season as part of its date. These may have been struck as presentation pieces for the completion of an important rail line connecting the mountainous Yunnan region with neighboring Vietnam.

The finest of three known examples, this coin is graded NGC AU 58 and pedigreed to the renowned Norman Jacobs Collection of Asian coins. It previously realized $546,250 at a Heritage sale in 2011.

"We are thrilled that this NGC-certified Spring Dollar set the record for the most valuable Chinese coin ever sold by Heritage Auctions," said Cris Bierrenbach, Executive Vice President of International Numismatics for Heritage Auctions. "The fact that this occurred during a time when many bidders were unable to view the coin in person speaks volumes about the benefits of NGC certification."

Other recent results underscore the growing demand for NGC-certified vintage Chinese coins. For instance, in December 2019, an NGC-certified 1897 Szechuan Ferracute Pattern Set realized $1,020,000 USD at a Heritage Auctions sale in Hong Kong, China. The 10-coin set shattered the record for a single lot of Asian numismatic rarities offered at a Heritage auction.

"We are honored that bidders trust NGC so much that they will pay $660,000 for an NGC-certified coin based only on its grade, description and images," said Mark Salzberg, NGC Chairman and Grading Finalizer. "Bidders can rest assured that every coin is graded by a world-class team and backed by a comprehensive guarantee of authenticity and grade."