With Germany as the host country and the world on the eve of war, tensions were high during the 1936 Summer Olympic Games. The event — one of great importance to the history of sports and the world in general — would be the last Olympics held for 12 years. 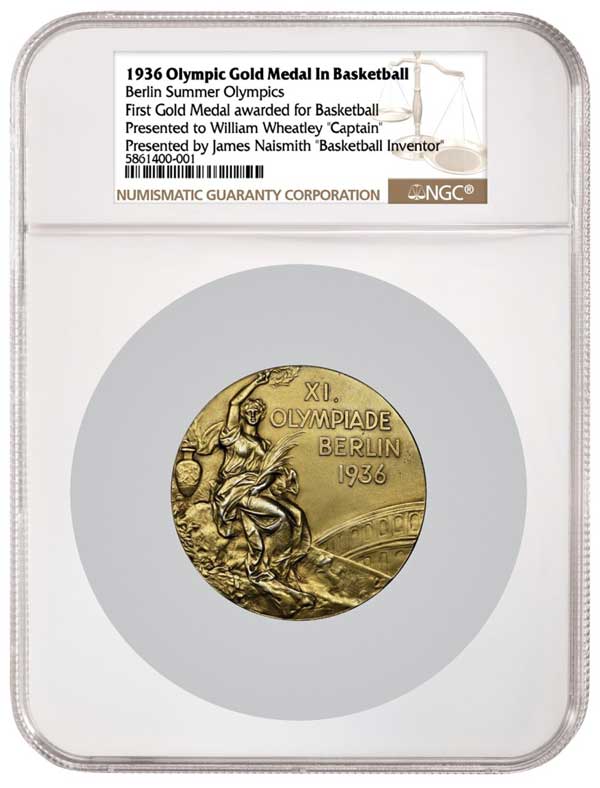 SARASOTA, Fla. (May 20, 2020) — Numismatic Guaranty Corporation® (NGC®) has certified the first Olympic gold medal for basketball ever awarded. This ultimate symbol of the sport's rise to a global phenomenon was presented to US team captain William “Bill” Wheatley by James Naismith, the inventor of basketball, during the 1936 Berlin Olympic Games.

With Germany as the host country and the world on the eve of war, tensions were high during the 1936 Summer Olympic Games. The event — one of great importance to the history of sports and the world in general — would be the last Olympics held for 12 years.

Basketball, which had been invented by Naismith in 1891, made its Olympic debut at the 1936 Games. The championship pitted the US against Canada and was played on an outdoor dirt court during a rainstorm. On account of the playing conditions, the final score was only 19-8. The US team was helped by its height advantage that allowed it to pass the ball a little more efficiently, thus avoiding the soggy ground and puddles.

Naismith crossed the Atlantic to serve as the honorary chairman of the Olympic tournament and to award the medals at its conclusion. As team captain, Wheatley went up to the podium before his teammates, thus establishing his medal as the very first Olympic gold medal for basketball ever awarded.

This extraordinary representative of one the greatest achievements in sports features allegorical figures of victory on the obverse and reverse, the former bearing raised text that reads “XI OLYMPIADE BERLIN 1936.” The medal measures 55 millimeters in diameter and weighs 72 grams, which is accommodated by the NGC Oversize Holder. The NGC certification label prominently displays the medal’s impressive pedigree.

At the time he made the Olympic team, Wheatley, a native of Gypsum Kansas, was playing Amateur Athletic Association (AAU) basketball for his company team while working for Globe Oil & Refining Co. After the Berlin Games, he played AAU ball for several more years, and then coached for a while before going into carpentry in the late 1940s.

In the early 1970s, Wheatley’s house was burglarized, and several silver coins were stolen, but amazingly the gold medal in the same drawer was left behind. Wheatley was then persuaded to send the medal and other memorabilia to the Basketball Hall of Fame. The medal remained at the Basketball Hall of Fame until Wheatley’s death in 1992, when it was returned to his family.

Now securely encapsulated in the NGC Oversize Holder with its pedigree clearly identified on the label, this incredible piece of history is protected for posterity.

“To hold the first Olympic gold medal for basketball, presented by James Naismith during the consequential 1936 Berlin Olympics — it really gives you goosebumps,” said Mark Salzberg, NGC Chairman and Grading Finalizer. “I am honored that its owner selected NGC to certify this important part of basketball history.”

Incidentally, this medal was submitted to NGC at an important time for basketball and numismatics. On June 4, the highly anticipated 2020 Basketball Hall of Fame Commemorative Coins are set to be released by the US Mint. NGC is ready with an all-star lineup of certification options for the basketball coins, including labels hand-signed by James P. Naismith, the last surviving grandson and namesake of James Naismith. Check out the NGC basketball coin program at NGCcoin.com/basketballcoins