Numismatic Guaranty Corporation® (NGC®) has certified the entire mintage of the largest Chinese Panda commemoratives ever produced. Struck for the 2019 Long Beach Expo in California to celebrate the 35th anniversary of Chinese Panda commemoratives (sometimes called "Show Pandas" or "Panda medals"), the five Pandas are five kilograms each in weight. 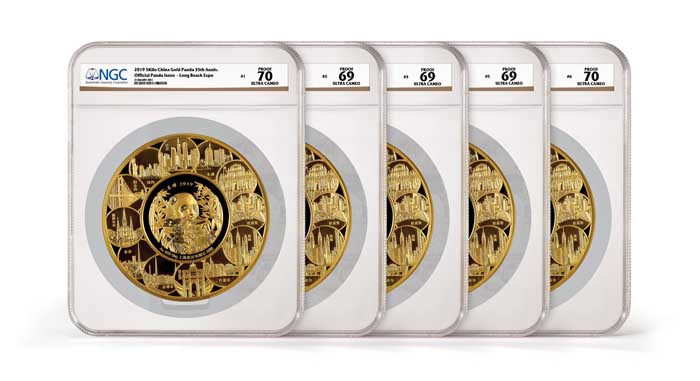 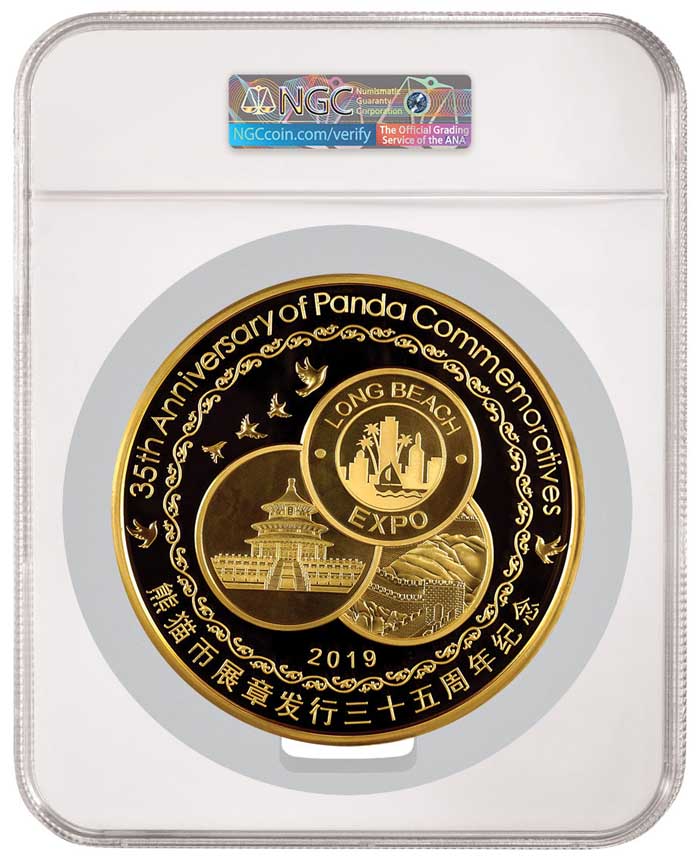 The reverse side of the giant show Panda.

SARASOTA, Fla. (October 22, 2020) — Numismatic Guaranty Corporation® (NGC®) has certified the entire mintage of the largest Chinese Panda commemoratives ever produced. Struck for the 2019 Long Beach Expo in California to celebrate the 35th anniversary of Chinese Panda commemoratives (sometimes called “Show Pandas” or “Panda medals”), the five Pandas are five kilograms each in weight.

NGC used the NGC Mega Holder® to encapsulate the massive gold pieces, which together contain over 800 ounces of gold. As of mid-October, gold is trading at more than $1,900 an ounce, but these rare Chinese Pandas are valued far higher than their total precious metal content of $1.5 million.

The obverse of these coins features a panda peacefully eating bamboo, encircled by the dozen cities around the world that have hosted events for which previous Panda commemoratives were struck. Hong Kong, China is at the top, as the very first Panda commemorative — a 1-ounce silver version — was struck for the 3rd Hong Kong Exposition in 1984.

The reverse showcases the Temple of Heaven design from China's related Panda coin series (issued since 1983), as well as the logo of the Long Beach show.

Two of the Pandas, the ones numbered 1 and 6 on their edge, received a grade of NGC PF 70 Ultra Cameo. The others, numbered 2, 3 and 5, were graded NGC PF 69 Ultra Cameo. (The number 4 was likely skipped because it is considered unlucky in China.)

Struck in .999 fine gold, each of the Long Beach commemoratives has a diameter of 150 mm (almost six inches) and weighs five kilograms (just over 11 pounds). Bullion coins such as the American Eagle and the Chinese Panda are often sold in versions that weigh approximately or exactly 1 ounce; it would take over 160 of those coins to equal a five-kilogram version.

These amazing commemoratives were submitted to NGC by Clark Smith, an NGC Authorized Dealer and a renowned numismatist who specializes in gold coins from around the world, especially China.

“Having these expensive and ultra-rare coins certified by NGC and encapsulated in the NGC Mega Holder gives me peace of mind,” said Mr. Smith. “NGC's expertise and holder options are unsurpassed.”

"The intrinsic and numismatic value of these Panda commemoratives is just jaw-dropping," said Mark Salzberg, NGC Chairman and Grading Finalizer. "Our certification of these incredible rarities again shows the market's preference for NGC-graded modern Chinese coins."

NGC can grade and encapsulate virtually all coins, from 1 gram to 10 kilograms. The NGC Mega Holder allows for the encapsulation of coins and medals up to 180 mm (7.1 inches) in diameter and 28 mm (1.1 inches) in thickness. To learn more about NGC’s holders, go to NGCcoin.com/holders .