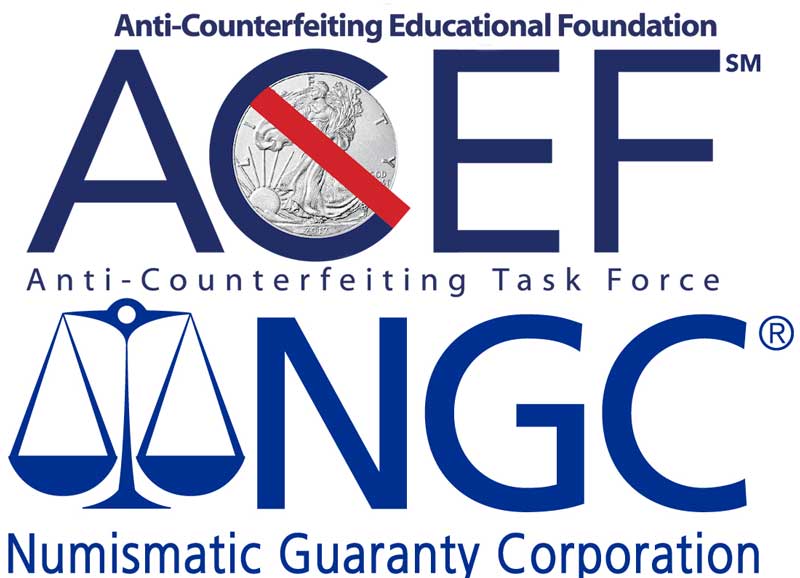 “NGC is now the official authentication service for the foundation and its Anti-Counterfeiting Task Force. ACEF assists federal, state, and local law enforcement as well as prosecutors to fight counterfeiting and the sales of counterfeit coins. This important work has resulted in the seizure of thousands of fakes and the apprehension and conviction of sellers of counterfeit items,” explained ACEF Executive Director Robert Brueggeman.

“In addition to the foundation’s volunteer expert network, under a recently signed three-year agreement we also have added the knowledgeable services of NGC's world-class numismatic experts. ACEF considers the alliance with NGC as a natural progression because both organizations are extensively involved in curtailing the amount of counterfeits we see in the market,” said Brueggeman.

NGC is the world's largest third-party grading service for coins, tokens and medals, and is the official grading service for the American Numismatic Association (www.money.org) and the Professional Numismatists Guild ( www.PNGdealers.org). Since 1987, NGC has authenticated and graded more than 48 million coins, each backed by the industry-leading NGC Guarantee of authenticity and grade.

“NGC is honored to be named the official grading and authentication service of the Anti-Counterfeiting Educational Foundation,” stated Mark Salzberg, NGC Chairman and Grading Finalizer. “This appointment reflects NGC's longstanding leadership position in counterfeit detection, a result of our world-class team of experts and state-of-the-art technology.”

Collectors, dealers and the general public can assist in the fight against fakes.

“See it? Report it!,” advised former Police Chief Doug Davis, ACEF Director of Anti-Counterfeiting. “If you have information about a counterfeit, you can easily go to the ACEF website, www.ACEFonline.org, and click on the Counterfeit Alert tab, www.acefonline.org/counterfeit-alert/report-a-counterfeit .”

“The important work of the foundation and the task force is supported entirely by donations,” explained Brueggeman. “The ACEF is a 501(c)(3) corporation and all donations to ACEF are tax deductible.”

For additional information or to make a donation, contact the Anti-Counterfeiting Educational Foundation by phone at 817-723-7231, by email info@ACEFonline.org or visit the web site at www.ACEFonline.org.