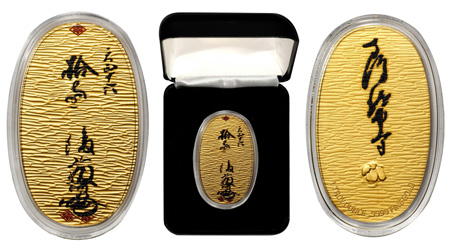 Costa Mesa, CA – In April 2021, Stack’s Bowers Galleries sold an incredibly rare Tensho-era ca. 1588 Japanese Oban for $1.9 million, more than doubling the pre-sale high estimate. Offered as part of the $19.2 million Pinnacle Collection in the firm’s April Hong Kong Auction, this Oban set a world record for the most valuable Japanese coin ever sold at auction.

This highly regarded and revered type is significant as the first Oban of Japan. Only about six examples are known, most of which are permanently impounded in institutions. It is considered by most numismatists to be virtually uncollectible as so few survivors exist. Without a doubt, it is one of the greatest rarities among all Asian and Japanese coinage.

While supplies last, these gold Oban commemoratives will be featured in the Stack’s Bowers Galleries Precious Metals Auctions hosted twice each month on the firm’s website www.StacksBowersGalleries.com. These sales showcase a wide range of bullion and semi-numismatic items in gold, silver, platinum, and palladium with bidding in percentages of the spot price. Opening bids start at as little as 90% of the spot price, while increments as small as 0.10% allow for the most precise bidding in the industry. For questions on these desirable 1 ounce gold Oban commemorative ingots or to register for bidding in the Stack’s Bowers Galleries Precious Metals Auctions, contact the firm by phone at 800-458-4646 or send an email to info@StacksBowers.com.