Presented was an exciting array of Numismatic Americana, U.S. colonial and federal coinage, and physical Bitcoins and Cryptocurrency. 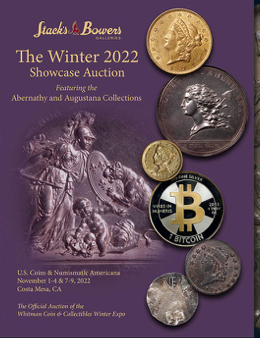 Costa Mesa, CA – Over $23 million in United States coins and currency was sold in the Stack’s Bowers Galleries Winter 2022 Showcase Auction , marking an incredibly successful close to the firm’s 2022 U.S. Showcase Auction season. Presented was an exciting array of Numismatic Americana, U.S. colonial and federal coinage, and physical Bitcoins and Cryptocurrency, including several significant collections that represented the pinnacles of their respective categories.

Part II of the Sydney F. Martin Collection realized nearly $4.2 million and featured Martin’s French colonial material, Rosa Americana coinage, 1785 and 1786 Connecticut coppers, and Washingtoniana. These selections included some of Martin’s most focused collecting specialties and his areas of unparalleled research. Among the most remarkable prices was realized by the unique 1670-A Double de l’Amerique , widely thought to be the first coin to feature the word “America.” The double’s provenance stretches back to 1870, and it sold for $504,000, reflecting its unique status and significant historical value. A 1717 Pre-Patent Twopence set a new price record for Pre-Patent Rosa Americana coinage when it realized $28,800. The famous 1733 Twopence Pattern , graded Proof-62 by PCGS, brought $57,600. The unique 1785 Miller 6.6-A.3 die variety Connecticut copper realized $43,200 as it crossed the block for the very first time. There was enthusiastic bidding for the Washington Seasons medals, as silver versions of The Shepherd and The Home realized $114,000 and $132,000, respectively. The rare Roman Head cent in PCGS Proof-64 RB brought $132,000, and the AU-55 PCGS Funeral Urn medal in gold sold for $66,000.

Among other colonial rarities, a recently-discovered NE shilling realized $312,000 as the only Mint State example known, graded MS-61 (NGC). An incredibly rare "1776" Continental Dollar in brass from the Addison Collection brought a bold price of $204,000.

Among federal issues, Proof gold coins claimed the top prices including a Superb Gem Proof 1885 double eagle that set a new record at $990,000. This result exceeded the PCGS Price Guide value by more than 70% and represents a three-fold increase on what the same coin realized when sold by Stack’s Bowers Galleries in August 2011. A Choice Proof 1861 eagle set a new record at $336,000—nearly tripling its prior sale price—and a Choice Proof 1874 eagle also set a new record at $264,000 in its first auction offering since the firm’s 1988 Norweb Collection sale.

Accompanying these colonial and federal coins was an exciting selection of Numismatic Americana highlighted by a pair of Libertas American medals in silver and bronze from the Cardinal Collection Education Foundation that realized $168,000 and $26,400, respectively.

Stack’s Bowers Galleries was also proud to present their Cryptocurrency Anniversary Session which celebrated one year since their first offering in this category. Presented in this special session was an unprecedented 101 coins spanning the Bitcoin, Litecoin, Monero, and Dogecoin cryptocurrencies and featuring many popular series. This session earned more than $440,000, pushing the total prices realized for the category over the past year above $2 million. Crypto highlights included a “gold rim” 2013 Casascius 1 Bitcoin that sold for a 200% premium at $66,000, a brass 2012 Casascius 1 Bitcoin that sold for an 80% premium at $38,400, and a silver 2013 Casascius 0.1 Bitcoin that realized more than a 300% premium at $9,600.

The complete prices realized from the Stack’s Bowers Galleries Winter 2022 Showcase Auction are available on the firm’s website www.StacksBowers.com. Stack’s Bowers Galleries is now looking ahead to their 2023 Showcase Auction season beginning with their spring 2023 event, the official auction for the Whitman Coin & Collectibles Expo in Baltimore. Consignments will be accepted through January 23, though certain categories are subject to earlier deadlines. For more information or to consign your coins to a future sale, contact the firm at Consign@StacksBowers.com or call (800) 566-2580.