The firm racked up huge results in coins, paper money, and other numismatic treasures in the August 2021 ANA event, representing the largest ANA sale in the firm’s nearly 90-year history. 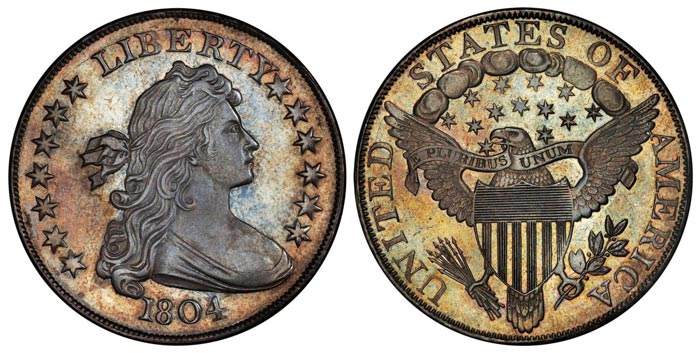 This 1804 dollar now ranks as the fifth most valuable coin ever sold at auction.

This 1804 dollar now ranks as the fifth most valuable coin ever sold at auction.

Costa Mesa, CA -- Over $50 million in coins, paper money, and other numismatic treasures were sold in the Stack’s Bowers Galleries August 2021 ANA Auction, representing the largest ANA sale in the firm’s nearly 90-year history. Stack’s Bowers Galleries held their first sale of the ANA’s annual summer convention more than 80 years ago in 1939, and this year’s sale is a significant milestone of success at this historic venue.

This record setting $50 million sale was fueled by numerous individual records across all product categories, emphasizing Stack’s Bowers Galleries as a leader in every aspect of numismatics. These records were led by the $7.68 million realized for the finest known 1804 dollar, which now ranks as the fifth most valuable coin ever sold at auction and the second most valuable silver dollar, behind only the firm’s $10 million sale of a 1794 dollar in 2013. Additional records from the Stack’s Bowers Galleries August 2021 ANA Sale include the most valuable U.S. Mint medal that sold at $600,000, the most valuable Proof Saint-Gaudens With Motto $20 that realized $336,000, a firm record for the most valuable ancient coin at $312,000, and a rare uncut sheet of $5 notes from Macon, Georgia that realized nearly twice the high estimate at $156,000.

This $50 million in overall prices realized represents an increase of 70% above the firm’s 2019 ANA sale results and more than double the total realized in August 2020. This incredible growth was no doubt driven by the firm’s industry-leading technology, including their state-of-the-art auction gallery at Griffin Studios and their proprietary Coins In Motion animation technology. These advantages, combined with the world’s finest numismatic expertise, ensures that Stack’s Bowers Galleries will continue as an industry leader for decades to come. For more information on Stack's Bowers Galleries' record-setting August 2021 ANA sale or to consign your numismatic treasures to a future auction, contact the firm at 800-458-4646 or email info@StacksBowers.com.