The PNG has honored Paul Nugget of East Meadow, New York with the PNG 2019 Abe Kosoff Founders Award for his steadfast dedication to the entire numismatic community and significant contributions. 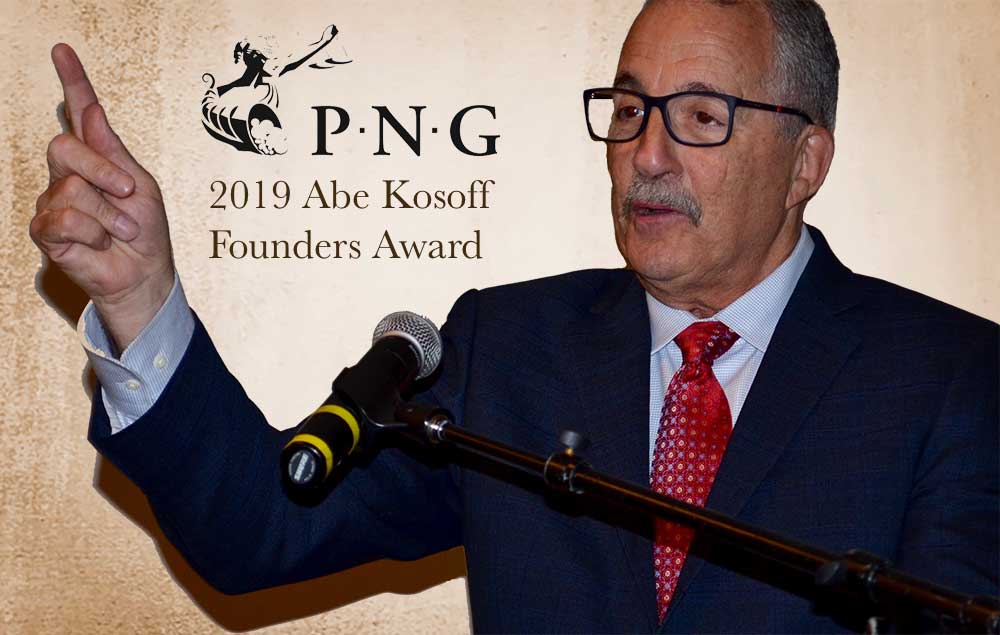 (Rosemont, Illinois) August 12, 2019 – The Professional Numismatists Guild (www.PNGdealers.org) has honored Paul Nugget of East Meadow, New York with the PNG 2019 Abe Kosoff Founders Award for his steadfast dedication to the entire numismatic community and significant contributions to the Guild and the numismatic fraternity in general.  The award is named after PNG’s Founding President who spearheaded the 1953 launch of the organization. 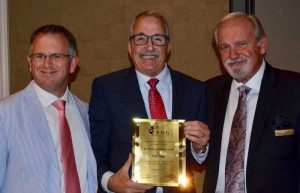 The announcement of the award to Nugget was made at the organization’s annual banquet held on PNG Day this year in the Chicago suburb of Rosemont, Illinois on August 12, 2019, the eve of the American Numismatic Association’s World’s Fair of Money®.

In 1969, Nugget decided that his job at the time as a crane operator at the Brooklyn Navy Yard was not the career path he wanted. So, he took his childhood passion for Indian Head cents and coin collecting and went to work at a local coin shop.

In 1971, he joined Manfra Tordella & Brookes in New York, and over the years worked at several other numismatic firms. He is currently affiliated with David Lawrence Rare Coins.  A PNG member since 1980, Nugget has been a respected mentor to many of today’s outstanding dealers and avid collectors.

The Sol Kaplan Award, to recognize efforts and contributions in combatting crimes against the numismatic community, was presented to Buddy Alleva of Massapequa, Long Island, New York. He has spent many hours assisting federal law enforcement agencies investigating tons of counterfeit coins arriving from China through the Port of Long Island.

The Sol Kaplan Award is jointly presented by the PNG and the Lewis M. Reagan Foundation, and is named after a former PNG President and Ohio dealer who was personally responsible for the apprehension of several people suspected of committing numismatic-related crimes.

The Robert Friedberg Award, presented to an author in recognition of an outstanding book or other literature, was given to Catharine C. Lorber for her reference book, Coins of the Ptolemaic Empire, Part I (Ptolemy I through Ptolemy IV): Volume I (Precious Metal) and Volume 2 (Bronze), published by the American Numismatic Society. The Friedberg Award, named after a long-time publisher and author of numismatic reference books, is not automatically awarded each year.

Dana Samuelson of Austin, Texas was honored with the PNG Distinguished Service Award for 10 years of service as a member of the PNG Board and as PNG President (2015-1017). This was only the second time this award has been given since its inception in 2015.

The PNG 2019 Significant Contribution Award was presented to former PNG President Q. David Bowers of Wolfeboro, New Hampshire, who also is a former ANA President. This award is given to those who have made exceptional, beneficial efforts over the years on behalf of PNG and the profession, and also added to the hobby.

The Art Kagin Ambassador Award, named after a former PNG President who provided distinguished service as an advocate of numismatic goodwill, was presented to Jack Beymer of Santa Rosa, California.

In a related announcement at the PNG awards dinner, the Anti-Counterfeiting Educational Foundation (www.acefonline.org) presented its Alan Kruezer Memorial Award to Dayton, Ohio coin collector Jack D. Young for his extensive work assisting researchers and numismatic specialists combat deceptive fakes offered in the marketplace.  He is a member of the Anti-Counterfeiting Task Force Expert Network and founder of the Facebook counterfeit watch group, “The Dark Side.”

The Kruezer Award is named after the late Alan “Al” Kreuzer who was instrumental in alerting the hobby about counterfeit third-party certification holders and fake insert labels.

The Professional Numismatists Guild is a nonprofit trade association composed of the country’s top rare coin and paper money dealers who must adhere to a strict Code of Ethics (www.PNGdealers.org/code-of-ethics) in the buying and selling of numismatic merchandise.