Rare British banknotes that Paper Money Guaranty® (PMG®) certified from the world-renowned collection of Drs. Joanne and Edward Dauer are being offered in an upcoming Spink auction . Bidding is already underway for the sale, scheduled for April 28, 2021. 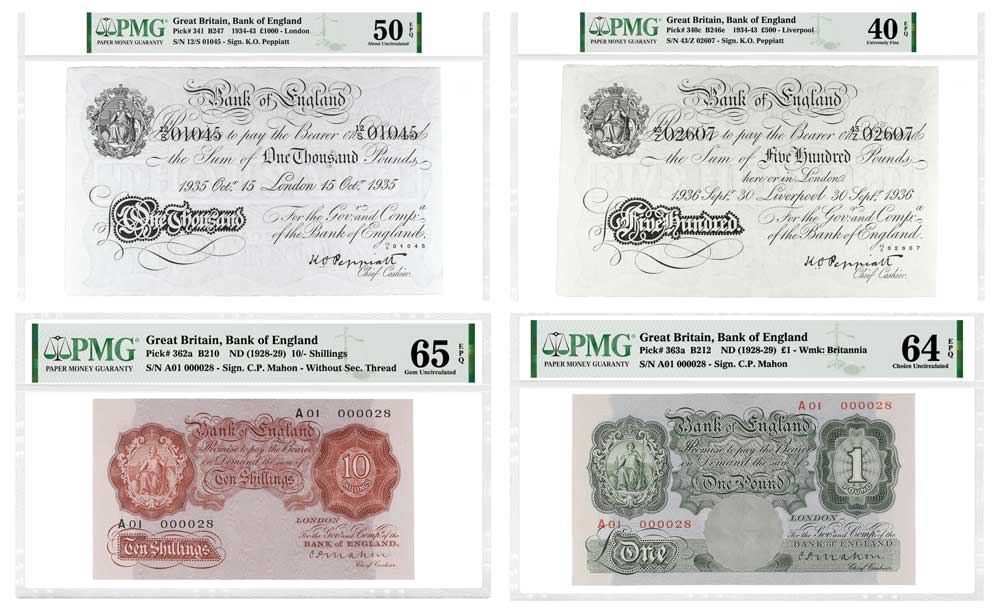 SARASOTA, Fla. (April 20, 2021) – Rare British banknotes that Paper Money Guaranty® (PMG®) certified from the world-renowned collection of Drs. Joanne and Edward Dauer are being offered in an upcoming Spink auction. Bidding is already underway for the sale, scheduled for April 28, 2021.

White Notes like these were issued for over 200 years until their uniface design of black text on white paper was phased out in the mid-20th century. As a testament to the incredible rarity of the £1,000 denomination, only four examples from three series appear in the PMG Population Report, with this Dauer example being the highest graded.

These two high-denomination notes are dated 1935 and 1936 and were issued before German counterfeiting operations during World War II forced England to stop releasing any note over £10.

The White Notes were phased out after World War II, but efforts to modernize British paper money were already well underway by 1928, when the Bank of England issued its first colored currency: 10/- Shilling and £1 notes.

The lot also includes a letter dated November 21, 1928, from the secretary of the Bank of England to a Treasury official. The letter asks him to accept the 10/- Shilling and £1 notes, which are "early numbers of the new Notes which will be in public issue at the Bank to-morrow morning."

“We are honored to have graded the Dauer Collection notes in this Spink sale, which include some of the greatest rarities in British paper money," said Chad Hawk, PMG Grading Finalizer. "With the backing of PMG's comprehensive guarantee of authenticity and grade, collectors and dealers can feel confident when bidding from anywhere in the world."

Drs. Joanne and Edward Dauer assembled one of the greatest collections of paper money that the world has ever seen, with a focus on banknotes from the US as well as British Commonwealth nations. For instance, a sale in 2018 of more than 110 PMG-certified Australian notes realized over $600,000.

“We are excited to offer these amazing selections from the Dauers' world-class collection,” said Barnaby Faull, Director of Banknotes for Spink, a global auction house founded in London in 1666. “With PMG's expert certification, these notes are now ready to maximize their potential.”

Other PMG-certified highlights in this sale include:

Founded in 2005, PMG is the world’s largest and most trusted third-party paper money grading service, with more than 6 million banknotes certified. PMG has established the industry’s highest standards of accuracy, consistency and integrity. Every note that PMG certifies is backed by the comprehensive PMG Guarantee of authenticity and grade, which gives buyers greater confidence. This results in higher prices realized and greater liquidity for PMG-certified notes. To learn more, visit PMGnotes.com

PMG, NGC, NCS, CGC, CCS, CSG, ASG, CAG and CCG are the registered trademarks or unregistered trademarks of Numismatic Guaranty Corporation of America, and/or its related companies in the United States and/or other countries. All other names and marks referenced in this release are the trade names, trademarks, or service marks of their respective owners.