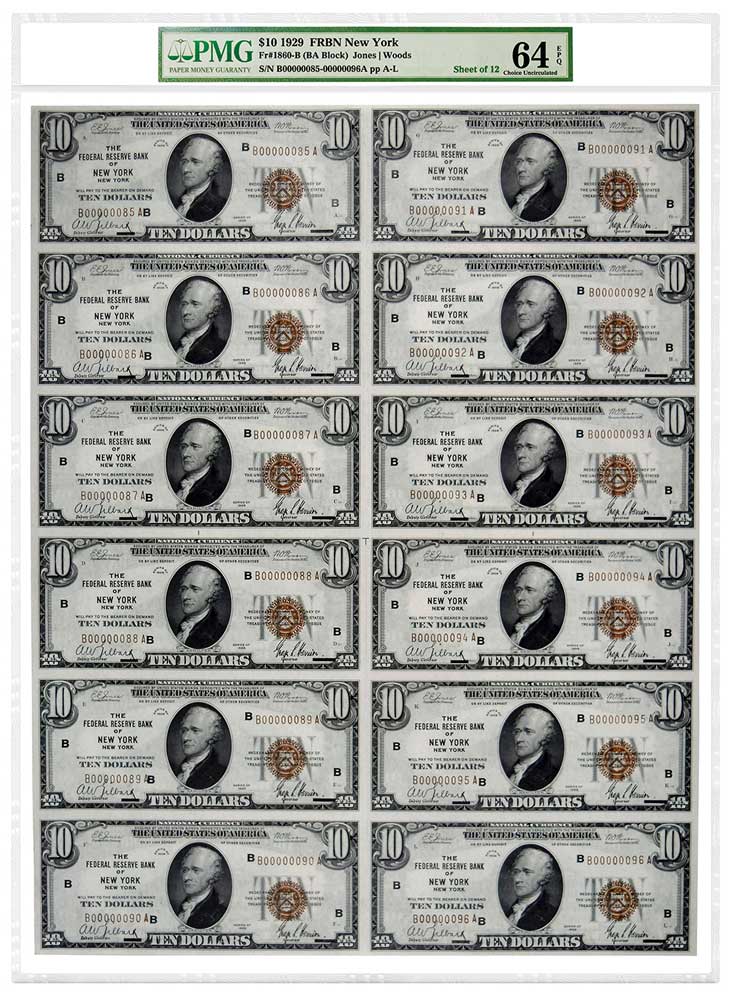 Banknotes are printed in sheets that are then cut into individual notes for circulation. Uncut sheets of vintage US banknotes are exceedingly rare as typically only a handful were saved for presentation purposes.

Banknotes are printed in sheets that are then cut into individual notes for circulation. Uncut sheets of vintage US banknotes are exceedingly rare as typically only a handful were saved for presentation purposes.

The ANA submitted the uncut sheets to PMG, its official paper money grading service, so that they could be protected for future generations by the latest PMG holder. Introduced in 2016, the current PMG holder is comprised of high-quality inert materials that provide superior optics and long-term preservation. Each sheet is encapsulated with a PMG certification label that identifies its description, grade and provenance.

One especially impressive piece that PMG graded from the ANA Bebee Collection is an uncut sheet of 12 1929 $10 Federal Reserve Bank Notes (New York) attributed as Fr#1860-B. Graded PMG 64 Choice Uncirculated EPQ, it is one of only two known sheets.

Although dated 1929, these notes were actually issued in March 1933 during a government-mandated nationwide bank holiday. The economic downturn that triggered the Great Depression had hit rock bottom, resulting in panic withdrawals from US banks. Just two days after his inauguration, President Franklin D. Roosevelt ordered the suspension of all banking transactions to prevent banks from failing entirely.

Upon the banks’ reopening, Treasury officials decided to issue banknotes backed by the sound assets of the banks — as opposed to issuing currency backed by gold — which meant new currency, indicating such, needed to be produced quickly.

Thus, the emergency cash was printed from hastily revised plates. Older notes are described at the top of the bill as “National Currency Secured by United States Bonds Deposited with the Treasurer of the United States of America.” The new issue bears the additional phrase “or by like deposit of other securities.”

Numismatists can view and study these historically significant notes thanks to Aubrey and Adeline Bebee.

The Bebees are among the most esteemed collectors in the history of numismatics. They collected important US and world coins, including their famous 1913 Liberty Nickel (which many believe kick-started the high-end coin market), but the Bebees’ foremost collecting interest was American paper money.

While paper money collecting did not have much cachet, it did allow the Bebees to purchase the highest quality notes for only a moderate premium over face value. In today’s market, many of these notes would sell for tens of thousands of dollars more, and pedigrees in the collection basically comprise a hobby hall of fame.

The many spectacular rarities in the ANA Bebee Collection include a 1934 $10,000 Federal Reserve Note and an almost complete type set of large-size US currency in all denominations from $1 to $100. The more than 800 individual notes in the collection were previously certified by PMG between 2010 and 2015.

In addition to being a keen collector, Aubrey Bebee was a major dealer. As a dealer, he was a leader in efforts to upgrade the ethics of the marketplace. His own business was known for exceptional quality and service, and he was one of the organizers of the Professional Numismatists Guild (PNG), becoming Charter Member No. 1 in 1955.

The ANA recognized the Bebees’ numismatic efforts and achievements many times. In 1968, Aubrey Bebee was awarded the Medal of Merit in recognition of years of service to the hobby. In 1988, the Bebees were chosen as joint recipients of the Farran Zerbe Memorial Award, the ANA’s highest honor, and they received the Lifetime Achievement award in 1992. Aubrey Bebee passed away the same year.

“The Bebees were pillars of 20th century numismatics, and their extraordinary impact on the ANA and the hobby continues to be felt to this day,” said Kim Kiick, ANA Executive Director. “We are very pleased that their incomparable collection of banknotes is now completely safeguarded and preserved by the state-of-the-art PMG holder.”

Mark Salzberg, PMG Chairman, added, “Numismatists dream of being the type of collectors that the Bebees were — perceptive, bold and generous. They were truly ambassadors of the hobby, and PMG is honored to help the ANA preserve their collection.”

The Bebees donated their collection to the ANA in 1988, and examples from it rank among the ANA Museum’s premier attractions. The ANA Bebee Collection notes are also featured in Paper Money of the United States by Arthur L. and Ira S. Friedberg, the standard reference book on American currency. The Bebees were longstanding contributors to the book, and now their collection deservedly has a permanent place in it.

To view a gallery of the Bebee Collection, visit ANA-Museum.org.