by Dennis Tucker The Morgan silver dollar is one of the most popular American coins of recent generations. We see evidence of this all the time here at Whitman Publishi 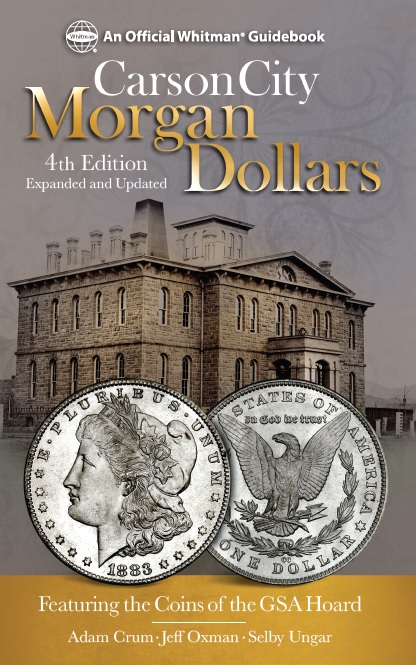 The Morgan silver dollar is one of the most popular American coins of recent generations. We see evidence of this all the time here at Whitman Publishing, in daily communication with coin collectors across the nation.

As a company we seek to publish books that help hobbyists understand their coins so they can build excellent collections, wisely and with as much useful knowledge as possible. The book Carson City Morgan Dollars, by Adam Crum, Selby Ungar, and Jeff Oxman, shines light on an exciting niche within the very popular Morgan dollar series. Its focus is on the coins struck in the 1800s at the United States Mint’s factory in the “Silver State,” Nevada.

The first edition of Carson City Morgan Dollars was released in late 2009. The new book satisfied a demand within the hobby community. Morgan dollars were so popular that even specialized subcategories, such as the Morgans struck at a particular mint, had large audiences of enthusiasts. This continues to be the case today.

In 2011 we published a second edition, expanded and revised. A few years later we updated the book to a third edition, which debuted at the American Numismatic Association’s National Money Show, held in Atlanta in March 2014. The third edition featured additional historical photographs, revisions from ongoing numismatic research, updated retail values and certified-coin populations, and new market commentary.

Today, nearly a decade after the first edition was published, the hobby’s appetite for information is as robust as ever. For the fourth edition of Carson City Morgan Dollars (due to be released next week) the authors have studied the rare-coin market and have updated the book’s valuation charts with a snapshot of today’s retail environment. Interestingly, some coin values have gone down in recent years—a reflection of market corrections in many areas of the hobby. Does this suggest interest in these historic coins is decreasing? I don’t believe so, at least not in an intellectual sense. Collectors remain as fascinated as ever by the romance and history wrapped up in Morgan dollars. If anything, today’s retail prices might offer fresh opportunities for newcomers (and longtime collectors) to acquire attractive coins for their collections at affordable prices.

In addition to updated valuations, the fourth edition has been expanded with 24 more pages that include a new photographic gallery of the Carson City Mint, drawing from government archives and other sources; a study of other coins minted there; a look at Morgan dollar values and numismatic research in the late 1940s; and more.

The fourth edition of Carson City Morgan Dollars takes its place on the bookshelf with other standard references such as Q. David Bowers’s Comprehensive U.S. Silver Dollar Encyclopedia (1992) and his hugely popular two-volume Silver Dollars and Trade Dollars of the United States: A Complete Encyclopedia (1993), and the Guide Book of Morgan Silver Dollars (first edition 2004, fifth edition 2016). It also joins other recent Morgan dollar–related publications such as The Private Sketchbook of George T. Morgan, America’s Silver Dollar Artist (Lee, 2013) and Morgan Dollar: America’s Love Affair With a Legendary Coin (Standish, 2014).

If the past is preface to the future, and if collector demand remains as strong as it is, we can happily look forward to more books on Morgan silver dollars—including continuing guidance and insight from Messrs. Crum, Ungar, and Oxman.