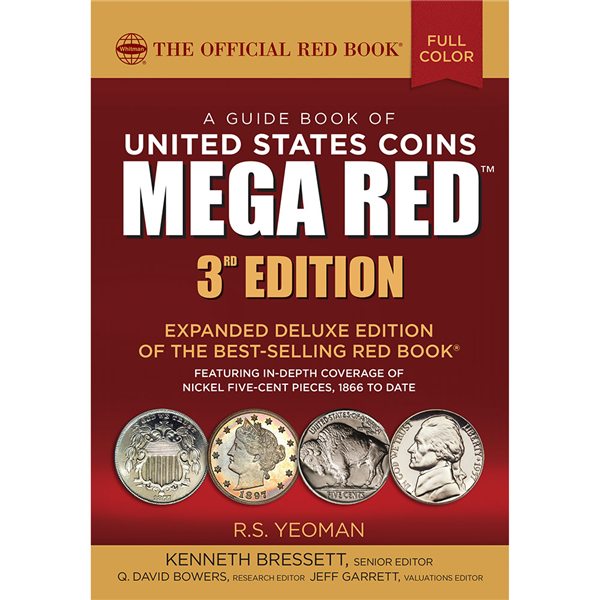 (Atlanta, Georgia) — Whitman Publishing announces the release of the newest edition of the Whitman Guide to Coin Collecting: An Introduction to the World of Coins, by K

(Atlanta, Georgia) — Whitman Publishing announces the release of the newest edition of the Whitman Guide to Coin Collecting: An Introduction to the World of Coins, by Kenneth Bressett. The 288-page softcover book debuted July 4, 2017, and is now available from booksellers and hobby shops nationwide, and online (including at www.Whitman.com), for $12.95. Mr. Bressett will autograph copies at the American Numismatic Association World’s Fair of Money in Denver, August 1–5, 2017.

The guide, popularly known as the “Yellow Book,” includes chapters on coin collecting as a hobby; places to find coins; how coins are made; venues to learn about collecting; getting started as a collector; caring for a coin collection; grading techniques and standards; coin prices and values; commemoratives, bullion, special coin issues, counterfeits, medals, tokens, casino chips, and more.

Illustrated with 672 full-color photographs and other images, the Whitman Guide to Coin Collecting also includes charts, lists, an illustrated glossary, a bibliography for continued learning, and an index for looking up information.

“Generations of coin collectors know Ken Bressett as the senior editor of the ‘Red Book,’” said Whitman publisher Dennis Tucker, referring to the annual Guide Book of United States Coins. “More than 24 million copies of the Red Book have been sold since 1946, and Ken has worked on the book since the 1950s. He’s also served the hobby as president of the American Numismatic Association, and as an educator, researcher, and author. He’s the perfect teacher to introduce new collectors to the hobby.”

Case studies, personal memories, and unique insight from Bressett’s 60-plus years in the hobby make the Whitman Guide to Coin Collecting a unique resource. Rodney Gillis, the American Numismatic Association’s education director, wrote the book’s foreword. “Coin collecting opens up an entire world of learning, just waiting to be explored,” Gillis said. “As you read this book, you will notice how skillfully Ken interjects his love of history within the context of collecting. The Whitman Guide to Coin Collecting will prove to be an invaluable research tool for a novice and a standard reference to look back to once you have become a seasoned collector. By reading this book you are taking a very positive step in becoming a more informed collector at an accelerated rate.”

Chapters include: “Coin Collecting as a Hobby” (Reasons to collect and have a hobby. Why people collect coins. Pride of ownership. Popularity and growth of coin collecting. A look at coins as historical documents.) “Coins Are Where You Find Them” (Check your pocket change. Why we use coins. Different kinds of coins. Other forms of money. How coins are made. What to look for in a coin. Mints and mintmarks.) “Learning About Your Coins” (Varieties, types, and differences that affect value. Coin clubs, trade shows, exhibits, dealers. Books on the subject. ANA services. Museums.) “How to Get Started” (The best places to look for coins. What to buy. Necessary tools and equipment. Publications.) “Caring for Your Collection” (Albums and holders. Storage problems. What you must know about cleaning your coins. Insurance considerations. Paper products.) “Grading Techniques and Standards” (How to grade coins. What to look for in investment grade coins. Use of grading guides and books. Grading services.) “Coin Prices and Values” (How to buy for best value. Pricing charts. Investing in rare coins. When it’s time to sell.) “Catalog of Special Coin Prices” (Prices for select coins most wanted by beginners. Why some coins are a better value than others.) “Commemorative, Bullion, and Special Coins” (Why commemorative coins are so popular. What is in the future for special coin issues. Where and how to purchase bullion coins. Collecting Mint and Proof sets.) “Oddities, Counterfeits, and Other Coins” (How to spot a counterfeit coin. Authentication services. Error coins. Tokens. Gaming chips. Coins from around the world.)

Whitman Guide to Coin Collecting: An Introduction to the World of Coins