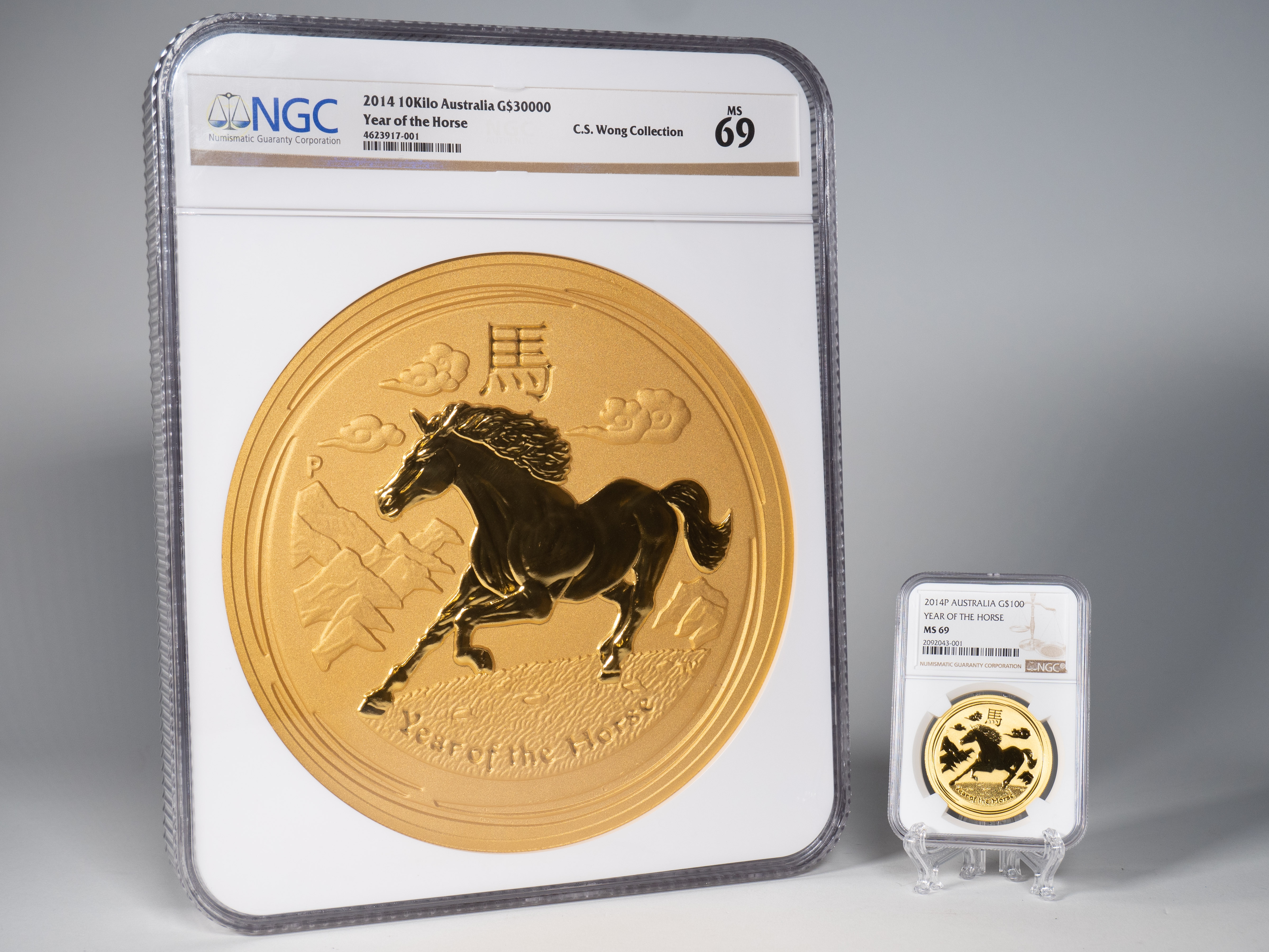 SARASOTA, Fla. (June 24, 2019) — Numismatic Guaranty Corporation® (NGC®) has certified an incredible group of colossal gold pieces: three 10-kilogram coins and a 5-kilogram “Show Panda.” The NGC Mega Holder® was used to encapsulate these massive gold pieces, which together contain over $1.5 million in gold.

The coin, which has a maximum mintage of 18, features China’s National Emblem with auspicious patterns on the obverse and a peaceful image of a pig on the reverse. The reverse contains the Chinese characters 己亥 (short for Year of the Pig, which began in February 2019).

The second piece is a 2014 Australia Year of the Horse $30,000 10-kilogram gold coin that was graded NGC MS 69. The design features Ian Rank-Broadley’s depiction of Queen Elizabeth II on the obverse and a galloping horse on the reverse. Above the horse is the Chinese character for horse, 馬 (mǎ). A maximum mintage of 10 coins was authorized, and this is the first example NGC has certified.

The coin is struck in 10 kilograms (321.5 troy ounces) of .9999 fine gold. Due to the limited mintage of coins such as these, their numismatic value is likely significantly higher than their gold content alone.

A tenth-ounce version of this coin, with a denomination of $15, has about the same diameter as a US Lincoln Cent. It would take more than 3,000 examples of the small Australian coin to equal the massive one.

This coin features the same portrait of Queen Elizabeth II on the obverse as the other Australian coin, with a monkey in the center of the reverse. To the right of the monkey is the Chinese character for the animal, 猴 (Hóu). As was the case for the Year of the Horse issue, the maximum authorized mintage was a mere 10 pieces.

The final piece differs quite a bit from the first three. It is a gold “Show Panda” struck by the Guobao Mint, an official mint of the Chinese government, to celebrate the 2018 Macau Numismatic Society 30th Anniversary Expo, held from November 22-26, 2018. Struck in 5 kilograms of pure gold, it is the only one in this size and weight. It is graded NGC PF 70 Ultra Cameo.

The obverse of this piece features vignettes of the designs for the previous four Macau Show Panda issues as well as a train from the “Crystal Mover” light rail system and the façade of the ruins of St. Paul’s Cathedral. The reverse depicts two playful pandas and the Macau Numismatic Society’s logo.

“I was very pleased with NGC’s grades as well as its ability to protect these remarkable pieces in its NGC Mega Holder,” said Mr. Wong. “NGC is the only third-party grader that I trust with my most valuable coins.”

“It was an honor for NGC to have been selected to grade these immense gold pieces,” said Mark Salzberg, NGC Chairman. “We are glad to provide them the same long-term protection that benefits all coins encapsulated by NGC.”

The NGC Mega Holder allows for the encapsulation of coins and medals up to 180 mm (7.1 inches) in diameter and 28 mm (1.1 inches) in thickness. To learn more about NGC’s holders, go to NGCcoin.com/holders.