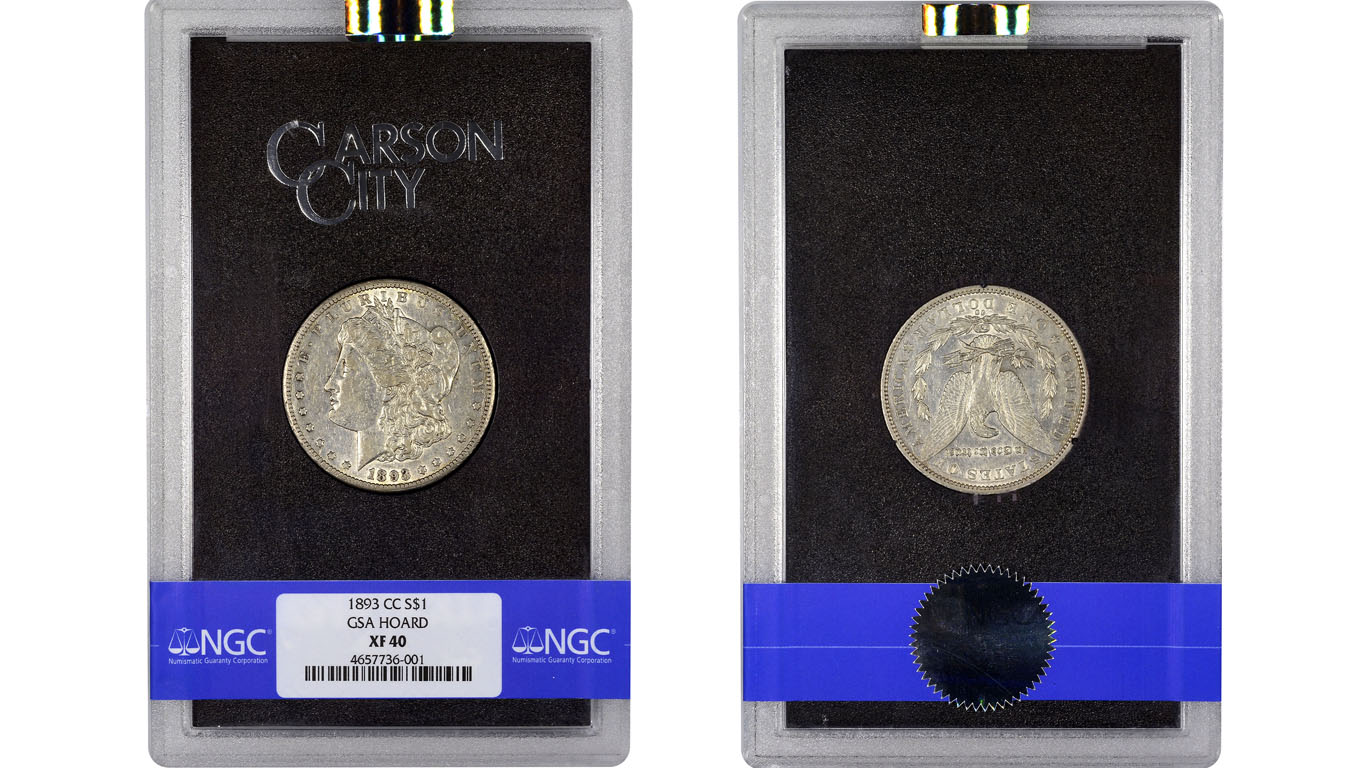 “GSA Hoard” is the name for a cache of several million silver dollars that had been held in the vaults of the US Treasury Department and later sold by the General Services Administration (GSA) from 1972 to 1980. The vast majority of these coins were Morgan Dollars from the Carson City Mint, identified by the “CC” mintmark below the eagle. The most common of these were the 1882-CC, 1883-CC and 1884-CC.

Coins pedigreed to the GSA Hoard are extremely popular among collectors, particularly when the coins are still encapsulated in the original GSA Hoard holders. NGC grades both the hard packs and soft packs while keeping the original holders intact. For hard packs, NGC wraps a distinctive blue band with the coin’s description and grade around the holder. Soft packs are encapsulated in a flexible holder along with a label bearing the coin’s description and grade.

NGC had previously graded the only known 1889-CC Morgan Dollar in a GSA hard pack. That extraordinary coin was graded NGC MS 62 DPL. According to GSA records, an 1892-CC dollar was included in the sale, but is believed to no longer be in that holder.

Interestingly, the hard pack 1893-CC was graded XF 40 by NGC. Only Uncirculated Morgan Dollars (those that graded 60 or higher) were supposed to have been sold by the GSA in hard packs.

The existence of this unique hard pack 1893-CC dollar has been known to specialists for several decades. Several of these specialists were contacted by NGC to confirm the authenticity of the holder prior to grading.

Jack Kelly submitted the coin on behalf of the owner, who wishes to remain anonymous. The owner had been given the coin along with a note: “Only 93-CC in a GSA hardpack. This coin should be hand-carried to Mark Salzberg w/ NGC in Florida for certification…” Mark Salzberg is chairman of NGC and a world-renowned coin grader.

Kelly and the owner met with Salzberg at the FUN show. Salzberg immediately recognized the significance of this coin and made arrangements for it to be transferred to NGC’s headquarters in nearby Sarasota, Florida, for further study. It was graded and returned to the owner the following day.

I have had the opportunity to see many GSA Hoard Morgan Dollars, but I had never seen an 1893-CC in a hard pack—or a circulated coin in a hard pack, for that matter,” said Salzberg. “To say that this coin is ‘one in a million’ doesn’t quite do it justice.”

Kelly added: “NGC was the obvious choice to certify this important coin. NGC’s grading of Morgan Dollars is the most accurate, and its blue band for GSA Hoard hard packs provides for superior display.”

“I first learned of it around 20 years ago and have been following it ever since,” Sharpe said. “It is very significant for anyone who wants to build a complete NGC Registry set of GSA Hoard Morgan Dollars. Its value is second only to the hard pack GSA Hoard 1889-CC that NGC graded MS 62 DPL.”

Selby Ungar, who is known in the hobby as the “King of Carson City,” added: “I’ve seen the coin before, and it’s the only one in a GSA ‘hard pack.’ I saw it before many years ago, and it’s very exciting for GSA collectors to have this coin come to light again. It’s great to see it graded by NGC.”