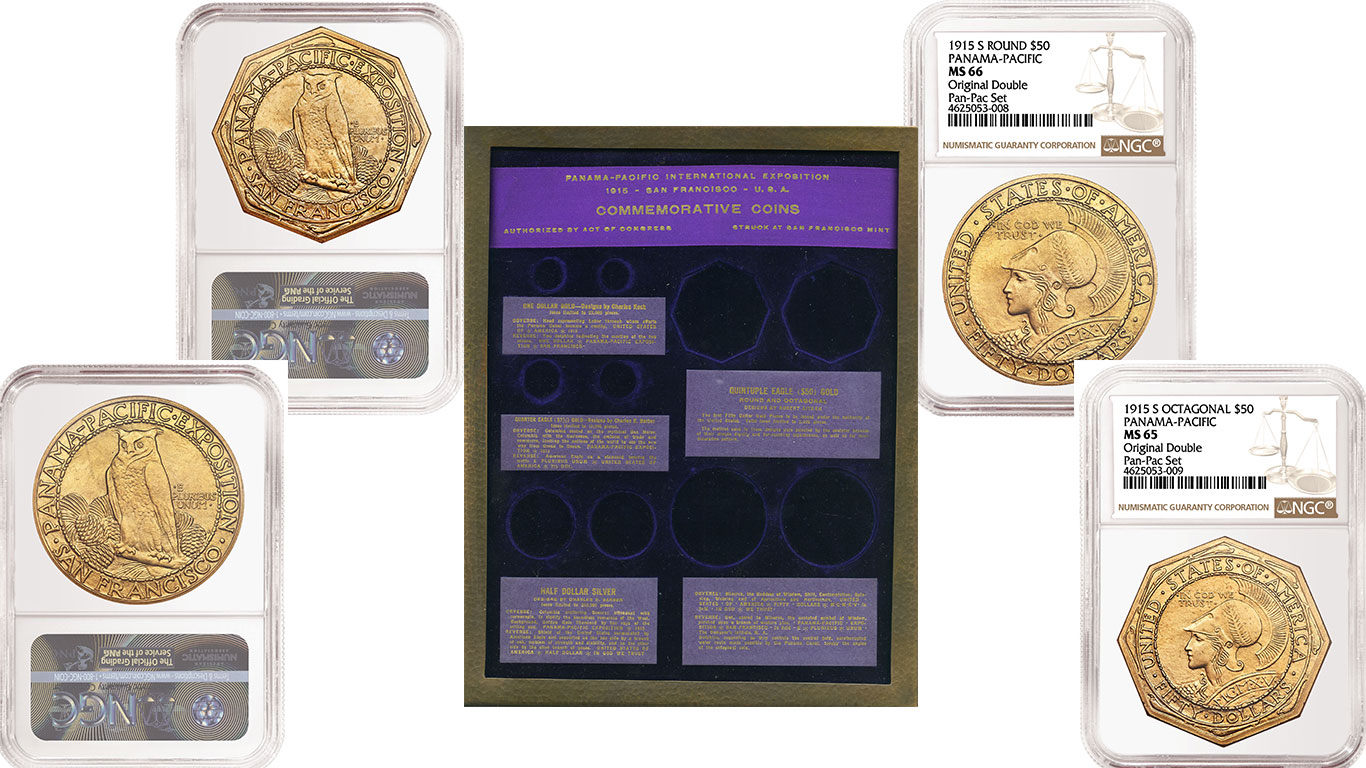 SARASOTA, FLA. (November 14, 2017) — Numismatic Guaranty Corporation® (NGC®) has certified an extremely rare 1915 Panama-Pacific “Double Set.” The set, one of the rarest and most remarkable items in all of American numismatics, will be sold by Heritage Auctions in January.

In 1915, San Francisco hosted the Panama-Pacific Exposition, a World Fair that celebrated one of the greatest feats of American engineering: the opening of the Panama Canal. The San Francisco Mint struck five commemorative coins to support the fair, including a silver half dollar, a gold dollar, a gold quarter eagle, a round gold $50 and an octagonal gold $50.

Most notable were the round and octagonal gold $50s, the largest gold coins ever struck by the US Mint. While these two coins are the pinnacle of any collection of classic commemoratives, all Panama-Pacific issues are highly sought by collectors for their low mintages and exquisite artistry.

The Panama-Pacific commemoratives were originally sold both individually and in sets. A single example sold for about double its face value. A three-coin “small set” without a gold $50 sold for $7.50, a four-coin set with only one of the gold $50s was sold for $100 and a five-coin set with both gold $50s was sold for $200. The premier offering was a 10-coin “complete double set” that contained two examples of each coin for $400.

Housed in a beautiful copper and glass frame with a velvet interior, the double set was truly extraordinary. It was also expensive, and less than a dozen of these sets were sold. Even fewer have survived.

NGC Chairman & Finalizer Mark Salzberg recalls having seen one 30 or 35 years ago but not having the opportunity to examine it in hand. As a result, the submission of this set stoked a particularly strong reaction from the seasoned grader, who described his examination in detail:

The Panama-Pacific Double Set is one of the most magnificent pieces in all of numismatics, so I was completely floored when I saw it brought into the grading room.

When I was handed the set, I carefully removed the screws from the copper frame. They were surprisingly difficult to unscrew, probably because the set had not been opened since it was assembled more than 100 years ago. It was an exhilarating experience; I felt like I was opening a numismatic time capsule.

As a grader, I was particularly interested to see the quality of these coins. The sides facing the viewer were, not surprisingly, nearly immaculate.

I removed the coins from the velvet backing to inspect the other side. Of course, I first had to look at the impressive gold $50s.

Round Pan-Pac $50s are seldom seen in Gem condition. One of the examples in the set was unusually spectacular, however, and we ultimately decided to grade it NGC MS 66. The other was graded NGC MS 64.

I next looked at the octagonal $50s and found that one had been lightly wiped on the reverse, the side that faced the velvet. I thought this was particularly interesting because it must have done soon after the coin was struck, perhaps even at the Mint. This specimen graded NGC MS 62. The second octagonal gold $50 was simply outstanding, and it graded NGC MS 65.

Octagonal $50s are usually seen with planchet flaws, and one example had such an imperfection on the reverse side. It graded NGC MS 62. The other piece, however, was exceptional, and it graded NGC MS 65.

I next looked at the silver half dollars. These had a distinctive, light tan patina on the side facing the velvet, an appearance that was really unique to the set. I wondered to myself whether I had seen any other Pan-Pac halves with this same appearance—perhaps an indication that they were once part of a set.

The gold dollars and quarter eagles were also quite nice, with grades that ranged from NGC MS 64 to NGC MS 66+.

After 30 years as a grader, it can sometimes feel like I have seen it all. After seeing this set, I have once again realized that there are still great numismatic treasures that I have yet to see. It was a highlight of my career to grade these phenomenal coins.

The coins were encapsulated by NGC with the pedigree “Original Double Pan-Pac Set” noted on the certification label. A list of the coins and grades follows:

All 10 coins will be sold as part of Heritage Auctions’ FUN US Coins Signature Auction, Jan. 3-8, in Tampa. The original case is also for sale. View the auction at HA.com/1271

Very interesting account. I'm wondering if there was reluctance to open a historical artifact that was otherwise pristine? I guess there is no chance the pieces will remain together as a complete set. Understandable, but it seems like a shame.

Not a comment, but a request to change my e-mail from rbulova@gmu.edu to rbulova@gmail.com When I tried to enter new e-mail under Newsletter, I got a warning to ":please enter a value" but I couldn't find what or where. Thank you very much. I enjoy reading your newsletters/blogs.