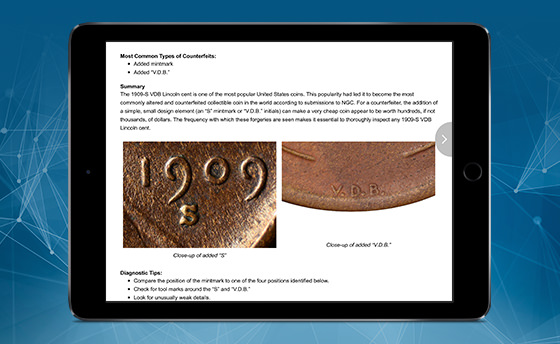 NGC has launched a comprehensive Counterfeit Detection resource at NGCcoin.com/counterfeits.This valuable resource provides detailed analysis and high-resolution images to help collectors and dealers identify counterfeit and altered coins. It contains information and insights from NGC’s expert team of graders, which has identified more than 100,000 counterfeit and altered coins since 1987. Rick Montgomery, NGC president, finalizer and one of the world’s foremost coin authenticators, serves as editor.NGC’s Counterfeit Detection portal will be continually updated with new discoveries, more high-resolution images and additional information.

Find valuable information about the most commonly seen counterfeit coins and types of forgeries at NGCcoin.com/counterfeits.

Hosted at NGCcoin.com/counterfeits, the resource features the 50 US coins and 25 Chinese coins most commonly targeted by counterfeiters. Each of these coins has on its own page, with high-resolution images, the type of counterfeits of it typically seen, tips for detecting these counterfeits and other helpful information.

This valuable resource was assembled under the direction of Rick Montgomery, NGC President, Finalizer and one of the world’s foremost coin authenticators. Many members of the NGC grading team also provided research and insights. NGC’s graders have identified more than 100,000 counterfeit and altered coins since 1987.

Other highlights of the resource’s lists of counterfeit coins:

The Counterfeit Detection portal also includes a section that explains what distinguishes the different types of fakes, which include cast, spark erosion, electrotype and transfer die counterfeits, as well as altered dates and altered mintmarks.

Users can also easily access more than 100 articles NGC Counterfeit Detection articles that have been published in NGC’s newsletter. (Subscribers to the newsletter are among the first to know about new counterfeit research. Subscribe for free by creating an account at any membership level at NGCcoin.com/Join.)

NGC’s Counterfeit Detection resource will continue to evolve. For instance, a section about the top 25 counterfeit world coins is being compiled and will be made available soon. Existing content will be updated as new discoveries are made.

Specialists and generalists alike can benefit from the information available in this free resource. Visit at NGCcoin.com/counterfeits.