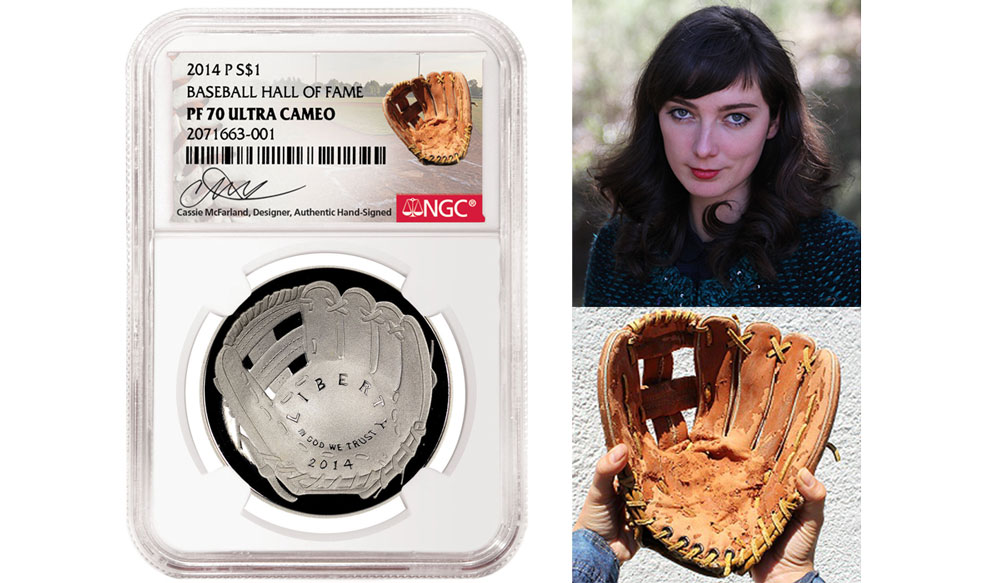 SARASOTA, FLA. (August 14, 2017) — Numismatic Guaranty Corporation® (NGC®) has inked a deal for graphic artist Cassie McFarland to individually autograph NGC certification labels. McFarland’s numismatic prestige comes from her winning design for the obverse of the 2014 Baseball Hall of Fame commemorative coins, the first concave coins produced by the US Mint.

McFarland, a California-based graphic artist, came across the design contest for that commemorative coin on May 10, 2013, when she was 27 years old—and one day before entries were due. Her design, based on a baseball glove that had been in her family for a long time, was a home run—it was selected as the winner several months later from among 178 entries.

The law that created the coin specifically called for a concave obverse and a convex reverse—resembling the shape of a contact lens. The baseball glove was a good fit for the recessed obverse of the coin; the protruding reverse features a baseball, highlighted by its iconic seams.

The commemorative coins—available as a clad half-dollar, silver dollar and $5 gold piece—were a hit, with the latter two quickly selling out. The 2014 coins raised millions of dollars for the National Baseball Hall of Fame, the sport’s shrine in Cooperstown, New York, which was celebrating its 75th anniversary that year. McFarland’s initials can be seen on the obverse, to the left of the date.

Adding Cassie McFarland to our signature program lineup gives collectors a unique way to connect numismatics to our national pastime,” says Miles Standish, NGC Vice President. “It is inspiring to work with a talented artist who has made such a valuable contribution to the numismatic world so early in her career.”

For NGC, the signature deal builds upon the popularity of its grading and encapsulation services for fans of baseball and coins; collectors and dealers have had nearly 80,000 of the Hall of Fame coins certified by NGC.

McFarland joins NGC’s impressive roster of label signers, which includes Charlie Duke, an astronaut who walked on the moon; Kenneth Bressett, the longtime editor of A Guide Book of United States Coins (the “Red Book”); and John M. Mercanti, the 12th Chief Engraver of the US Mint and designer of the American Silver Eagle reverse.