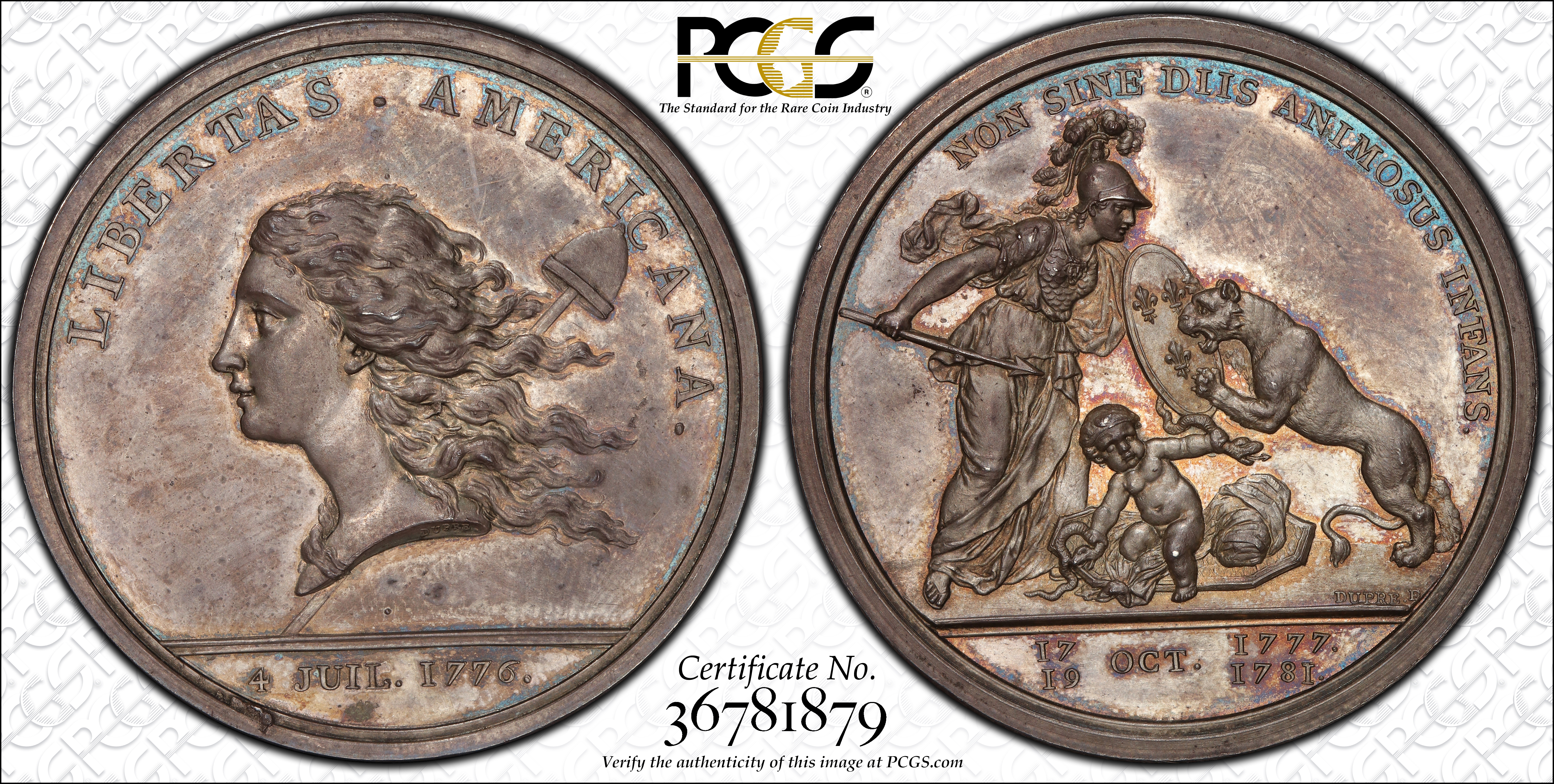 Santa Ana, CA –  At the upcoming American Numismatic Association’s World’s Fair of Money Convention in Rosemont, Illinois, August 13-18, Stack’s Bowers Galleries is pleased to announce it will have at their bourse table 1005 an incredible display assembled by the Cardinal Collection Educational Foundation and centered around one of the most beautiful and important medals struck in American history. 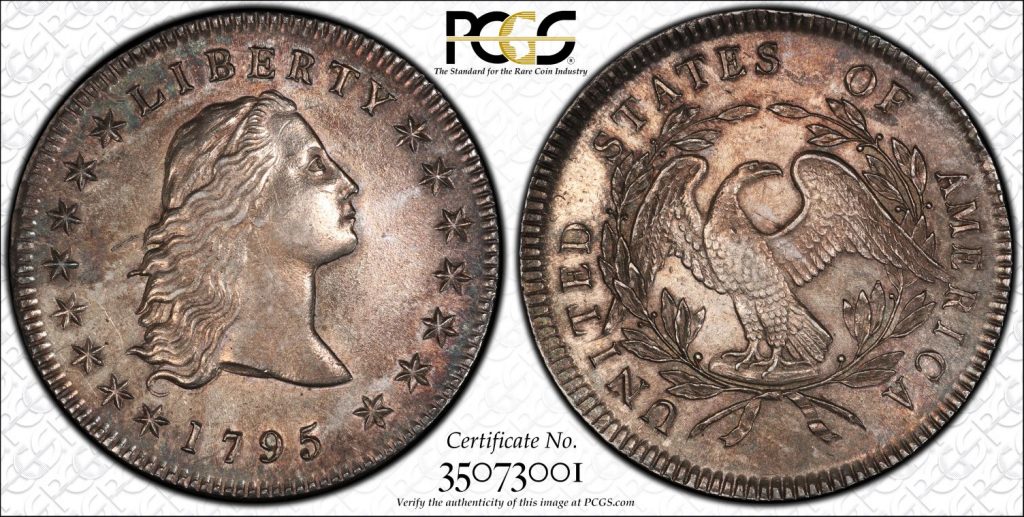 Following decisive victories at Saratoga and Yorktown, Benjamin Franklin wrote to the United States Secretary of Foreign Affairs Robert Livingston: “This puts me in mind of a medal I have had a mind to strike … representing the United States by the figure of an infant Hercules in his cradle, strangling the two serpents; and France by that of Minerva, sitting by as his nurse, with her spear and helmet, and her robe specked by a few ‘fleurs-de-lis.'” From concept to realization, execution, delivery, payment, and worldwide press coverage, Benjamin Franklin truly was THE man behind the historic Libertas Americana medals. He leveraged his position in France as the Minister Plenipotentiary representing the United States to garner support and connect with preeminent artists and engravers of the day. He personally stewarded the process to bring the Medals into reality. The manifestation of Benjamin Franklin’s vision of Liberty — the beautiful Libertas Americana Medal made in 1783 – struck a chord with the people and nations of the world, and ultimately became the inspiration for the Flowing Hair Liberty coinage of the First United States Mint.

From the very beginning, the Flowing Hair portrait of Lady Liberty was described as a “fine woman” and a “beautiful maiden.” The lovely image of Lady Liberty inspired artists and engravers of the day, and became the genesis of the Flowing Hair and Liberty Cap coinage of the First United States Mint. Yet, the inspiration provided by Liberty did not end there, but has continued on through generation after generation, enduring in the minds of the public and spawning official restrikes and tribute pieces through to the present day. Not surprisingly, it was the unanimous choice for the Number 1 spot among the 100 Greatest American Medals and Tokens. While the original medals of 1783 may be challenging to acquire (especially those struck in silver), a series of later restrikes have been issued officially in a variety of metals and formats, allowing this beautiful and historic design to be within the reach of collectors everywhere. 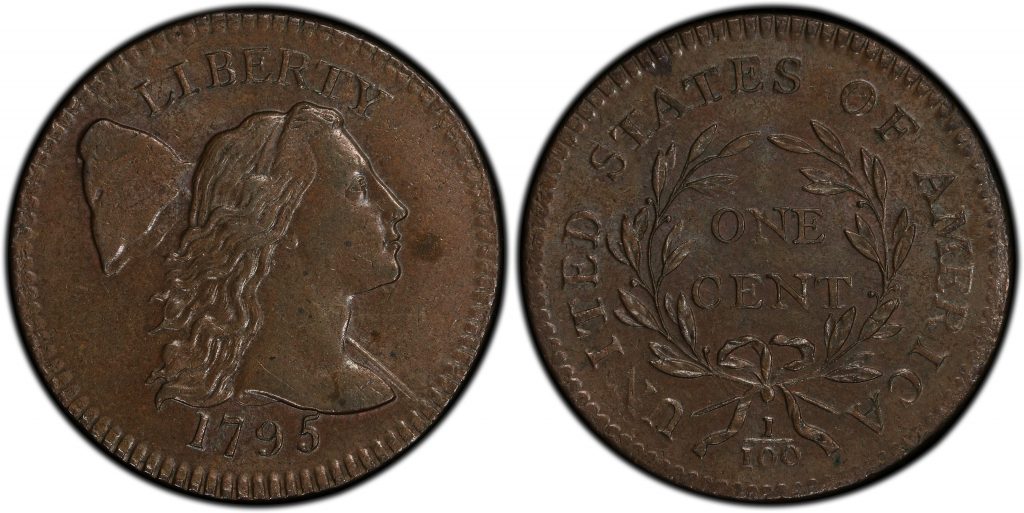 The Cardinal Collection Educational Foundation’s Tribute to the Libertas Americana medals includes examples of the original silver and bronze medals distributed by Benjamin Franklin himself, and examples of the Flowing Hair/Liberty Cap coinage the medal inspired.  Also included are Paris Mint official emissions of so-called “restrikes” (struck from newly engraved dies copied directly from the original dies), as well as period ephemera such as Benjamin Franklin’s “Explication” of the Libertas Americana medal” (perhaps the only copy in private hands), a rare original plate from the 1784 book Historisch-Genealogischer Calender oder Jahrbuch der merkwurdigsten neuen Welt Begebenheiten fur 1784, by C. M.Sprengel, and an original etching of George Washington on horseback with an etching of the Libertas Americana medal beneath.

We invite those planning to attend this year’s ANA World’ Fair of Money convention to take the time to admire and study this remarkable display. For more information please contact Christine Karstedt by email at ckarstedt@stacksbowers.com.