The finest of three known Proof 1825/4/1 Capped Head Left half eagles sold for a record price of $4.08 million 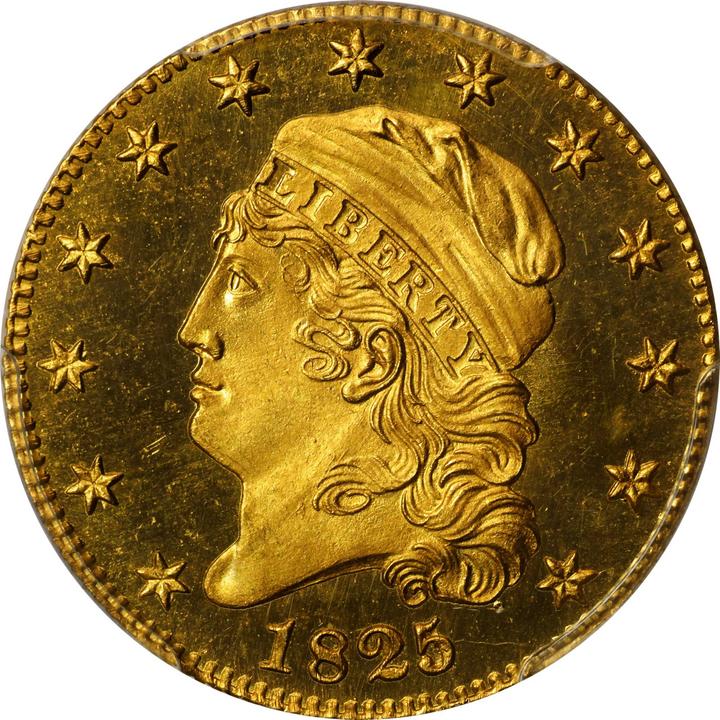 Costa Mesa, CA –The finest of three known Proof 1825/4/1 Capped Head Left half eagles sold for a record price of $4.08 million in the Stack’s Bowers Galleries Summer 2022 Global Showcase Auction, nearly doubling the pre-sale high estimate. It set a new record as the most valuable pre-1834 Proof United States gold coin ever sold at auction. It also ranks as the second most valuable $5 gold coin of any format, sitting behind only the $8.4 million 1822 $5 which was also sold by Stack’s Bowers Galleries. Sold as part of the Mocatta Collection in the firm’s Rarities Night on Thursday, August 26, this $4.08 million result contributed to over $16.9 million in total prices realized for the session.

Among the three known examples, the Proof-67 Cameo (PCGS) CAC Mocatta specimen ranks as the finest by a clear margin. The other two survivors include the Proof-62 (PCGS) example in the Harry Bass Core Collection and another in the National Numismatic Collection at the Smithsonian Institution (graded Proof-66, per John Dannreuther). This rarity was missing from most of the greatest cabinets ever formed including Garrett, Pittman, and Norweb, and the $4.08 million result was a reflection of the monumental opportunity presented to advanced collectors of Proof and early gold coinage.

It boasts a magnificent provenance stretching back to before 1864 and had been held privately off the market since the early 1970s. It was first traced to the collection of George F. Seavey formed before 1864, and eventually would pass through the cabinets of such luminaries as Lorin G. Parmelee, Waldo Newcomer, Colonel E.H.R. Green, Louis E. Eliasberg, Sr., and even King Farouk of Egypt. Stack’s has had the pleasure of offering this piece twice before in their 89-year history, including their 1944 sale of the Bell Collection and their 1947 H.R. Lee sale—on behalf of Mr. Eliasberg. It was acquired for the Mocatta Collection circa 1973 and was cherished privately in the decades leading up to the Stack’s Bowers Galleries sale.

This Superb Proof half eagle was accompanied by numerous world-class treasures in the Mocatta Collection, which is expected to realize over $7 million in total prices by the conclusion of the Stack’s Bowers Galleries sale. Other highlights from that cabinet include a Mint State 1829 Small Size $5 that realized $408,000 and a Gem Proof 1887 $20 that sold for $420,000 .