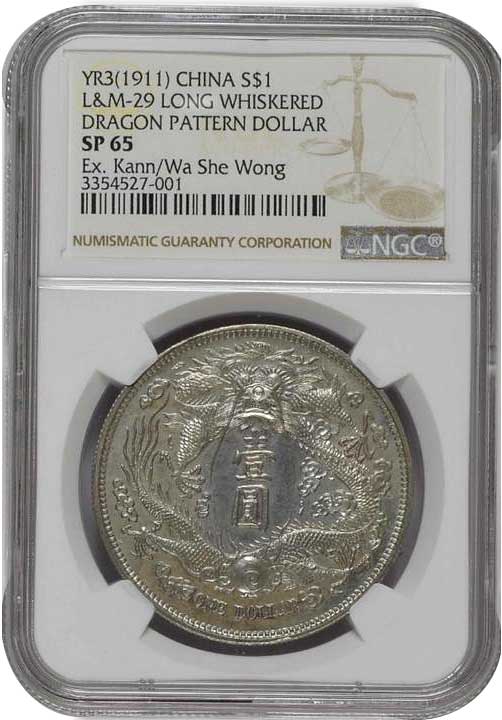 This very rare and desirable example of the 1911 Chinese Silver Long-Whisker Dragon Dollar is missing from most of the significant collections of Chinese coins, private or institutional, such as the famous Irving Goodman, Dr. Norman Jacobs and Chang foundation collections.

Santa Ana, CA -- Numismatic auction powerhouse Stack’s Bowers Galleries is presenting for sale a beautifully-minted and ultra-rare 1911 Chinese Silver Long-Whisker Dragon Dollar at the New York International Numismatic Convention on January 17, 2020. This important rarity will be presented in lot 20246 of Stack’s Bowers’ World and Ancient Coin Auction, in Session One of the two-day event to be held at the Grand Hyatt in New York City. This 1911 Chinese dollar, created at the Central Chinese Mint in Tientsin, features an extremely rare pattern and is the single finest certified of the type at either the Numismatic Guaranty Corporation or Professional Coin Grading Service.

Valued at as much as $500,000, this fantastic rarity is missing from most of the significant collections of Chinese coins, private or institutional, such as the famous Irving Goodman, Dr. Norman Jacobs and Chang foundation collections. This piece exhibits a needle-sharp strike with crisp well-defined devices, blocked off characters and smooth surfaces. Delicate light patina graces the peripherals of the obverse while the reverse displays a light mottled tone.

The head of the Central mint at Tientsin, Mr. Luigi Giorgi, served as head designer and chief-engraver from 1910-20. His many works are of outstanding quality in fine style and are very artistic. Several of his pattern designs were adopted and placed into full production with two of the most widely recognized motifs in Chinese numismatics being the 1911 Dragon in the clouds Imperial Dollar and the 1914 Yuan Shih-kai Dollar. Mr. Giorgi had the privilege of designing and creating the last Chinese Imperial issue which saw use well into the Republic.

“The artistic details of this coin alone make it a stand out piece in any collection,” said Brian Kendrella, President of Stack’s Bowers Galleries. “Factor in the rarity as well and you have a collector’s piece that is seldom seen throughout the world. This will make an unparalleled addition to any collection.”