This Mocatta Collection is worthy of serious analysis as contained important rarities, included significant representatives of all denominations of U.S. gold coins, was extremely fresh, and had been off the market since the 1970s. 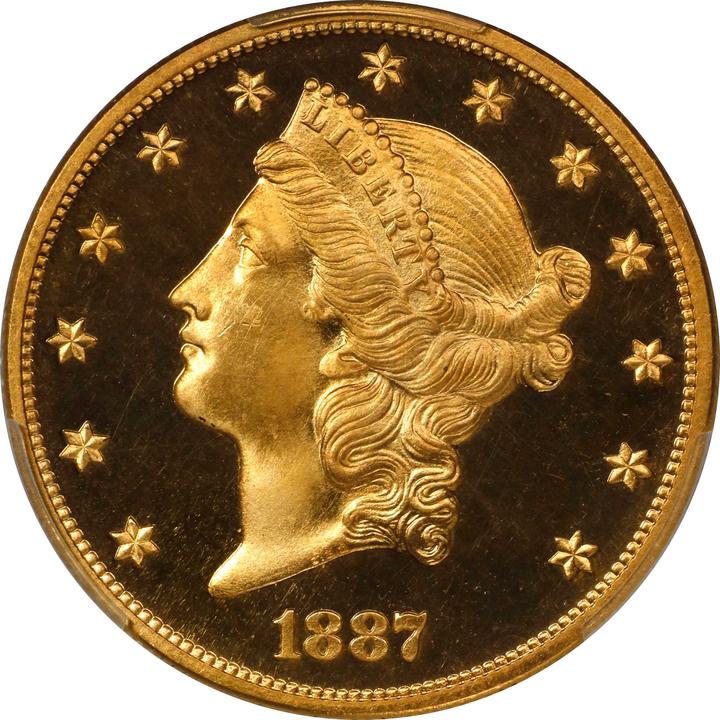 This discussion is about rare U.S. gold coins that were featured in the Mocatta Collection and auctioned as part of the Stack’s Bowers Rarities Night session on August 25. This consignment is particularly newsworthy as it contained important rarities, included significant representatives of all denominations of U.S. gold coins, was extremely fresh, and realized several prices that were especially strong. Apparently, all of the rarities in the Mocatta Collection had been off the market since the 1970s. 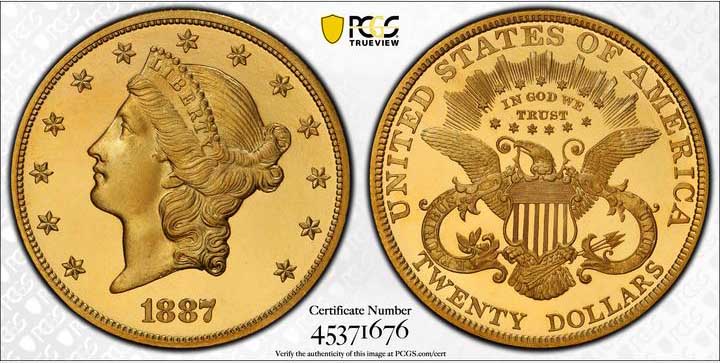 I was a little surprised by the strength of the $420,000 result. Although this is an especially attractive coin and certainly a gem, there are a significant number of light lines. I really did not perceive this coin as being likely to upgrade to 66. My interpretations of coins, however, tend to be different from those of some grading-wholesalers.

The CPG-CAC medium retail price estimate for a Proof-65 DCAM 1887 is or was $288,000. I could understand a purchase price of $325,000 for this specific coin. It is possible that a collector building a CAC-only set of Proof twenties might have felt compelled to bid aggressively for this coin as a better CAC approved Proof 1887 double eagle might be impossible to acquire. There is not a need to understand the thoughts of the leading bidders, however, to definitively conclude that the $420,000 result for this coin was one of the strongest prices realized in this whole auction, which was large.

Stack’s Bowers conducted a post-ANA auction extravaganza during late August in Costa Mesa, California. The week before, all lots were available for viewing at a hotel near the ANA Convention in Rosemont, Illinois, not far from O’Hare airport.

The Mocatta Collection distinguished itself from many of the other consignments in more than one way. The freshness of the Mocatta Consignment is an important aspect.

A coin is fresh if it has not been offered publicly, or noticeably offered within the mainstream of the coin business, for more than five years. On average, though of course not always, fresh coins realize higher prices at auction than the same respective coins would have realized if they had not been fresh. As most or all the coins in the Mocatta Collection had not been offered in more than forty years, they were extremely fresh.

This 1825/1 half eagle, which was called “1825/4/1” by PCGS, realized the highest price in the whole Stack’s Bowers auction, $4,080,000, strong for sure. Although my published list in March 2021 of the top ten auction records for U.S. and early American coins and patterns ( https://tinyurl.com/TopTen031221 ) needs to be publicly updated, this coin would not qualify to be on a new top ten list. This $4,080,000 auction result, however, would bring the Mocatta Collection 1825/1 half eagle very close to being in the top ten, perhaps twelfth?

In the near future, I will devote a separate discussion to this 1825/1 (“1825/4/1”) half eagle. The focus here is on the other gold coins in the same Mocatta consignment. Besides, this coin has already been widely reported. Other coins deserve attention, too. 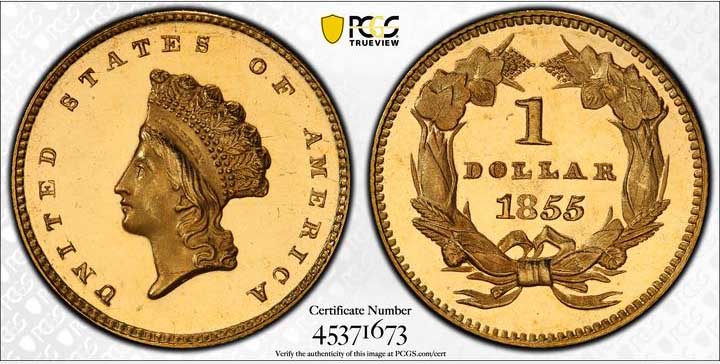 The Mocatta Collection, CAC approved, PCGS certified Proof-64 Deep Cameo 1855 One Dollar Gold piece realized $264,000. This is a great coin, fabulous for one that has been certified as Proof-64. It is more than very attractive and really cool. Though strong, the $264,000 result is not outrageous, certainly fair enough in the current market environment.

Though important, ultra rare and really neat, Proof Type 2 One Dollar Gold coins do not have the status of 1796 No Stars quarter eagles ($2.50 gold coins). These are particularly important as the first issue of quarter eagles and as a one-year only design type.

Twenty 1796 No Stars quarter eagles have been PCGS graded as AU55 and sixteen as AU58. NGC reports fifteen as AU58. The Mocatta coin is a little below average for a certified AU58 grade early quarter eagle, though is decent enough. The $216,000 result was a medium retail price.

It is curious that market levels for PCGS or NGC graded AU58 1796 No Stars quarter eagles have not risen very much, recently. Since January 2021, the values of a large portion of surviving rare U.S. gold coins clearly surpassed the highs that were reached at or towards the end of the market boom from 2003 to 2008. In contrast, Greysheet Bid levels for AU58 grade 1796 No Stars quarter eagles have increased to a mild extent.

Of course, 1796 No Stars quarter eagles remain popular. Further analysis would be required to draw sensible conclusions regarding changes in their market levels. The Mocatta consignment featured an interesting mix of popular business strikes and rare Proofs.

The 1876 Three Dollar Gold piece is a Proof-only issue and one of the most important dates in the series. The 1875 is a Proof-only issue, too, is somewhat rarer and far more famous than the 1876. An 1875 Three is much more likely to be a topic of conversation. It is noteworthy that the Mocatta Collection had an 1876.

Crackout artists and coin doctors have repeatedly resubmitted many of the same 1876 Threes to PCGS and NGC. PCGS reports a total population of fifty-one. The NGC census is twenty-eight. The combined PCGS and NGC total population of seventy-nine probably refers to forty to forty-five different 1876 Three Dollar Gold pieces. The number of submissions is certainly much higher than seventy-nine. Some frequent submitters return the labels from broken holders after coins were ‘cracked out’ and some others do not return these labels (inserts), at least not always.

The Mocatta 1876 was PCGS certified Proof-65 Cameo and has a sticker of approval from CAC. The $150,000 result was certainly strong, though certainly understandable. This is one of the most desirable 1876 Threes I have ever seen, and I have probably examined at least two-thirds of those that survive. To someone who is already building a set of Threes, the Mocatta 1876 is definitely a coin that I would recommend. 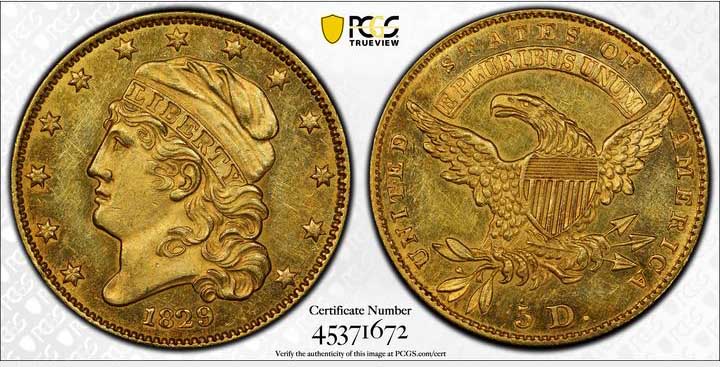 I would also recommend the Mocatta Collection 1829 if asked by a collector who is assembling a set or is very interested for other reasons. The 1829 half eagle in the Mocatta consignment was overshadowed by the already mentioned, amazing 1825/1 (“1825/4/1”) that realized more than $4 million. During August, some coin enthusiasts may have forgotten that there are two types of 1829 half eagles and each of them is a Great Rarity!

For a PCGS or NGC graded MS62 early gold coin, this 1829 is exceptional, in terms of eye appeal, sharpness and relative originality. Indeed, it is more desirable than some other certified MS62 or even MS63 half eagles of the same design type. This Mocatta 1829 Small Date half eagle is commensurable to the Dunham-Bass-Jacobson coin that was auctioned at the FUN Convention in January 2012 for $431,250. The Mocatta coin is a little better, in my opinion. Given the rage for rare date gold during 2021 and so far in 2022, the 1829 Small Date half eagle was one of the best values in the whole Stack’s Bowers auction extravaganza.

After being excited by the Mocatta Collection 1825/1 and 1829 half eagles, viewing the Mocatta Collection 1797 Heraldic Eagle ten was anticlimactic. It is just another PCGS or NGC graded AU55 early gold coin, average or a little below average in quality. The $40,800 result is in the low end of the retail range, a strong price realization as many such coins bring wholesale prices in major auctions. 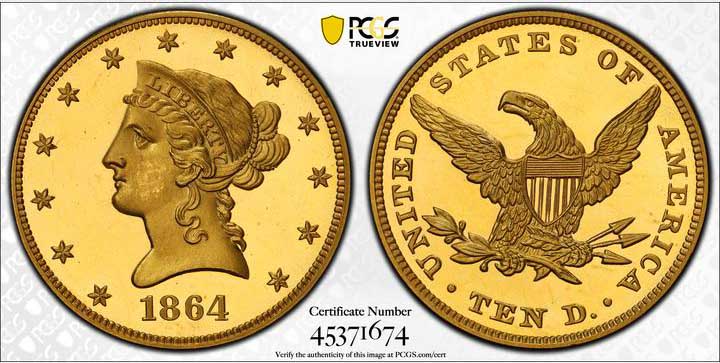 For several denominations of U.S. coins there are Philadelphia Mint dates from the 1860s that are rare to extremely rare. The 1864 eagle is rare in both business strike and Proof formats.

The Mocatta Collection 1864 eagle was PCGS certified as Proof-65 Deep Cameo. The $252,000 result is a medium to high retail price.

Another very strong price for a gold coin in the Mocatta Collection was realized by a CAC approved Proof-63 1914 Saint Gaudens double eagle, $84,000! For Proof 1914 Saints, the PCGS population is nineteen and the NGC census is twenty-nine. The CAC population for Proof 1914 double eagles is just three.

Though some coins in the Mocatta Collection were far more impressive than others, the coins and other items in this consignment tended to be rare, popular and/or very unusual in some way. Was the builder of this collection, or his primary advisor, a very experienced numismatist who really enjoyed himself?