Victoria gold Proof “Una and the Lion” soars to $528,000 among many other world coin rarities sold in Heritage's NYINC auction. 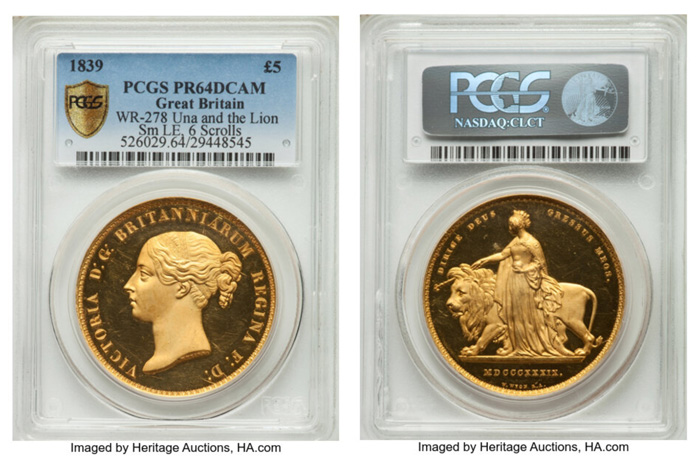 “In every respect, this event went above and beyond, surpassing expectations," Heritage Auctions Executive Vice President of Numismatics Cris Bierrenbach said. "We are continuing to see strong and often record-breaking prices across the board, bringing extraordinary value for our consignors.”

The Una and the Lion, by William Wyon, is a British series rarity first issued as part of Queen Victoria's delayed coronation Proof set that has transcended the confines of British numismatics and has become a coin type that is collected by trophy hunters worldwide.

From the Madrid mint, an Amadeo I gold Specimen 100 Pesetas 1871(71) SD-M SP63 PCGS surpassed pre-auction estimates when it climbed to $240,000. The first example ever offered through Heritage Auctions also is the finest certified example. It has been suggested that as few as six to eight of the 1871 100 Pasetas remain, making this example an unlikely survivor in its choice-certified state and the finest recognized by the grading services, which have recognized just three other examples.

More than a dozen bids boosted an Octavian, as Consul (43 BC), with Julius Caesar, as Dictator Perpetuo and Pontifex Maximus. AV aureus (19mm, 7.69 gm, 9h). NGC VF★ 5/5 - 4/5 to $204,000 – 1.7 times its high pre-auction estimate. This exceptional rarity includes two portraits, one of Octavian, the other one of exceedingly few near-contemporary portraits of Julius Caesar in gold.

Also soaring past expectations was a Philip Syng, Jr. & Lewis Fueter and G-Counterstamped/Regulated 8 Dollars ND (pre-1783) VF Details (Clipped, Graffiti) PCGS that closed at $192,000 – nearly 2.5 times its high pre-auction estimate. Feuter was one of the leading producers of Indian Trade silver for the British military apparatus in North American before 1770, and Syng a renowned silversmith. This magnificent specimen is believed to be only the second Syng-regulated gold piece brought to auction, and one of precious few to bear his mark, making it a coin of immense historical interest and significance.

Three dozen bids poured in for a Republic 8-Piece Uncertified gold & silver Medallic Proof Set 1968 until it rose all the way to $162,000 – more than 10 times its high pre-auction estimate. From a mintage of just 25, this is an extraordinary full set of gold and silver issues that almost never is offered together at auction. It was struck in commemoration of the election of Alexander Dubcek, an event which kicked off the Prague Spring, an attempt to reform the Communist Party in Czechoslovakia, which would eventually be quelled by the invasion of Warsaw Pact troops and the Czechoslovak Hockey Riots the following year.

Several records were set in the auction, including:

Other highlights included, but were not limited to:

Highlights from the Signature® event included, but were not limited to: