In part 1, I discussed the importance of the spring SBG auction extravaganza, especially the offering of much fresh material from multiple sources. I then focused on the collection of Paul and Rosalie Zito. Here in part 2, the topic is the very impressive set of Three Dollar Gold pieces (Threes) assembled by someone named “Huberman,” which was auctioned by Stack’s Bowers Galleries (SBG) on April 5 in Costa Mesa, California. 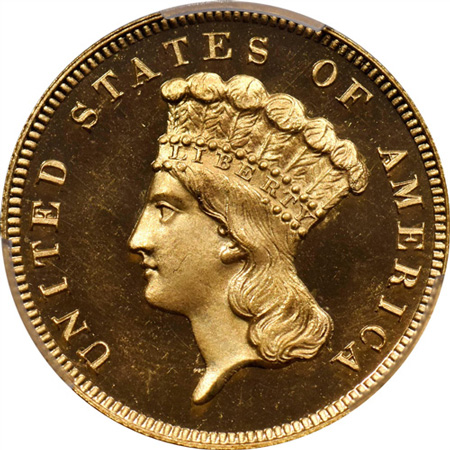 In part 1, I discussed the importance of the spring SBG auction extravaganza, especially the offering of much fresh material from multiple sources. I then focused on the collection of Paul and Rosalie Zito. Here in part 2, the topic is the very impressive set of Three Dollar Gold pieces (Threes) assembled by someone named “Huberman,” which was auctioned by Stack’s Bowers Galleries (SBG) on April 5 in Costa Mesa, California.

The Huberman set of Threes included a curious mix of Proofs and business strikes. It was missing just three coins. Except for the set in the Harry Bass Core Collection, all sets of Threes are missing the unique 1870-S, which will receive a tremendous amount of attention if it is auctioned in the near future.

The Huberman set was also missing an 1854-O, a business strike only date, and an 1875, a Proof-only date. Mostly because of the exceptional quality of some of the rarer Proofs, the Huberman Collection was the best of the sets of Threes to have been auctioned in a while.

Three Dollar Gold pieces were minted from 1854 to 1889. Though they bear some resemblance to Type 2 and Type 3 One Dollar Gold pieces, Threes are distinctive, certainly much different in design from Liberty Head gold coins and U.S. gold types of the 20th century.

Given Huberman’s apparent budget spread over a period of decades, he could easily have acquired an 1875 and an 1854-O. Indeed, some of his stellar Proofs must have cost substantial sums. As he had a mediocre 1876, another rare Proof-only date, it is surprising that Huberman did not have at least a mediocre 1875. Although there were quite a few business strikes included, Huberman’s set of Threes will be best remembered for Proofs.

While Huberman’s three 1873 Threes are extremely important to specialists in Three Dollar Gold pieces, the topic of 1873 gold coins, especially Threes, is a little complicated and Huberman’s 1873 Threes should be analyzed separately. Someone beginning a set of Three Dollar gold pieces may wish to first seek some of the least scarce dates and eventually strategize in regard to 1873 Threes. Decent representatives of most dates in the series are not difficult to find and acquire.

It is strange that Huberman’s set lacked an 1854-O, the only Three minted in New Orleans. An AU grade 1854-O is easy to find and acquire for a price that is or was dramatically lower than the value of any of Huberman’s Proofs.

This collection did have an 1854-D, which is the only date in the series struck at the U.S. Branch Mint in Dahlonega, Georgia. The Huberman Collection 1854-D was NGC graded AU55. Though its surfaces are not wonderful, they are superior to those of some of the other NGC or PCGS graded AU55 1854-D Threes that I have examined. 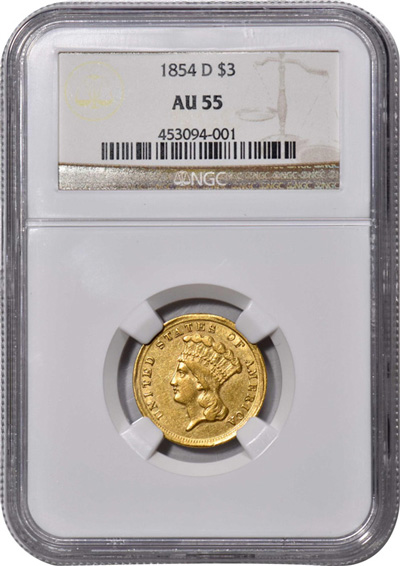 Another well respected analyst publicly implied that the $66,000 result for the Huberman 1854-D was a very strong price and said that a CAC approved AU55 1854-D would be very likely to realize at least $100,000 if soon offered at auction. I disagree.

The $66,000 result was strong, a fair retail price, but not very strong. As the Huberman 1854-D was not approved by CAC, remarks regarding the value of a CAC approved AU55 grade 1854-D should not be thought of as being directly applicable to the Huberman 1854-D. It is educational, however, to distinguish estimates of market levels for CAC approved coins from their non-CAC counterparts.

In a major coin auction, some coins will realize wholesale prices and other coins will realize retail prices; most will bring a result around the respective wholesale/retail border. Much attention was paid to the Huberman Collection. I theorize that these Threes brought more, on average, than they would have if the same coins had been in dealer consignments or had not been highlights of a major auction.

As I emphasized in part 1, fresh coins tend to realize more, and the Huberman Collection was very fresh. Furthermore, it is not easy to auction coins for retail prices. On average, pertinent dealers have more time than interested collectors to focus on auctions and view a large number of auction lots. Given the severe shortage of rare gold coins in dealer inventories in early April, the attention paid to this Stack’s Bowers event, the freshness of the Huberman Collection, and the popularity of the lone Dahlonega Mint Three, it was not surprising that the Huberman 1854-D brought a medium retail price, strong but not very strong.

In contrast, the $13,800 result for the PCGS graded AU55 1855-S Three was a very strong price, conceptually much higher than the $66,000 result for the just mentioned 1854-D. Indeed, this $13,800 realization is the highest price for such an 1855-S Three in a very long time. If I had known that it would bring this much, I would have carefully inspected this coin.

The $14,400 result for the PCGS graded MS61 1858 Three falls in between a top-wholesale price and a medium retail price. Most likely, this result is a low retail price.

The $9,000 result for the Huberman Collection, PCGS graded MS62 1860 Three was a very strong price, and not a great value. It is very plausible that this price is reflective of the success of this auction and not of any underlying market or numismatic reality. There is not a solid reason for concluding that 1860 Threes have risen in value much more so than other dates in the series. It is possible that some bidders figured that this coin would upgrade to 63, though I hope that they were not thinking so.

The Huberman Collection Proof 1862 Three is noteworthy. It was PCGS certified Proof-65 Deep Cameo and CAC approved. The $108,000 result was strong, not very strong, approximately a medium retail level, which has not increased much recently.

It would be extremely difficult to gauge a market level for the Proof 1866 in the Huberman Collection, because it is certainly a ‘top pop’! For more than twenty years, there have been big-spending collectors who feel strong desires to own the top pops in series of classic U.S. coins, and are willing to spend gigantic premiums for them. This was particularly true of a few bidders during auctions in 2021 (https://tinyurl.com/TopPops2021) and in the January 2022 FUN auction (https://tinyurl.com/FUN22Part1). At times, such buyers ignore price guides, the advice of experts and underlying realities while launching themselves in pursuit of top pops!

The Huberman Proof 1866 was PCGS certified as Proof-66 Deep Cameo and was approved by CAC. It is the only Proof 1866 Three Dollar Gold piece that has been PCGS or NGC graded 66. Moreover, the Huberman Collection Proof 1866 was earlier in the Eliasberg Collection and even earlier in the collections of the Clapp family and William Woodin. The $192,000 result is newsworthy, though not especially pertinent to market levels for Proof Threes overall. 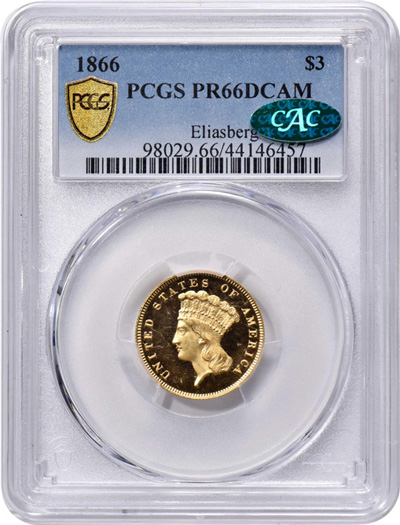 Also, this Clapp-Eliasberg-Huberman 1866 is a terrific coin, one of the coolest Proof Threes that I have ever seen. I did not wish to put it down.

Although the Huberman 1867 pales in comparison to the Huberman 1866, it is an appealing coin and is rare in Proof format. This CAC approved, PCGS certified Proof-62 Cameo 1867 realized $20,400, apparently a strong price. I was surprised to learn that it was purchased by a wholesaler in California, evidently for inventory. The Huberman 1867 was publicly offered, soon after the auction, for $27,500.

An especially newsworthy price was the $57,600 result for a CAC approved Proof-64 Cameo 1869. This is an excellent coin, though analysts and pertinent dealers may have been figuring that a medium retail price is or was in the $30,000 to $40,000 range. The fact that this 1869 Three was earlier in the epic Garrett Family Collection is a positive factor, though this Garrett pedigree would not account for a substantial percentage of the value of this coin.

I believe that it has been more than ten years since a Proof 1869 Three has been auctioned. Collectors assembling sets by date may have scrambled for this one.

The physical characteristics of this specific 1869 Three may have contributed to the $57,600 result. The beige-white devices contrast wonderfully with the green-caramel fields. This coin is very attractive. Undoubtedly, it attracted the attention of collector-connoisseurs and grading-wholesalers.

The PCGS certified MS66 Prooflike 1872 Three in the Huberman Collection is amazingly cool. The $132,000 result should be understandable to experts who have examined this piece and other highly certified 1872 Three Dollar Gold pieces. This coin really stands out! 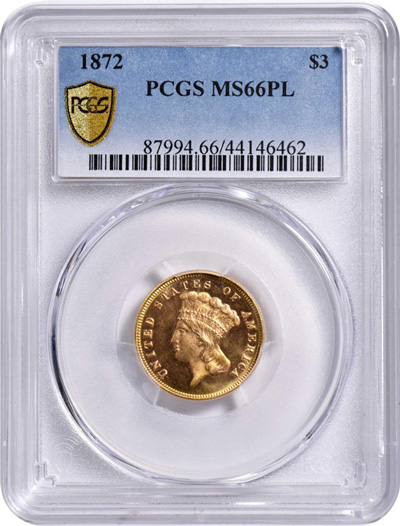 The $87,000 result for the CAC approved, PCGS certified Proof-66 Deep Cameo 1883 is not so understandable and is extremely newsworthy. Though very attractive and desirable, it is not one of the greatest Proof Threes that I have ever seen

CAC reports one 1883 as Proof-66 Cameo, two as Proof-67 Cameo, six (including the Huberman 1883) as Proof-66 Deep Cameo and two as Proof-67 Deep Cameo. Even if these tallies include some repeat counting of individual coins, I figure that there are at least six different CAC approved Proof-66 or higher 1883 Threes with noticeable Cameo contrast. Furthermore, not all of the PCGS or NGC certified 1883 Threes have been sent to CAC. The $87,000 result for this coin is mysterious, though unquestionably very strong.

The auction of the whole Huberman set was a landmark event. Many of Huberman’s Proofs from the 1860s and 1870s are extremely important and really cool. I have been viewing auction lots for decades, and I have personally examined a majority of the high quality, rare U.S. coins in existence. The Huberman Collection was certainly one of the most memorable sets of Three Dollar Gold pieces.

As recent announcements indicate that two of the greatest and most exciting sets of Three Dollar Gold pieces will be auctioned in the near future, those of Bass and Bender, Threes constitute the leading topic of the moment. I will provide coverage and analysis.