Every week, our coin staff at Heritage receives multiple inquiries from hopefuls who are searching their pocket change for treasures. One such lucky consignor has entrusted a modern rarity to Heritage for sale in January: a 1969-S Doubled Die Cent! 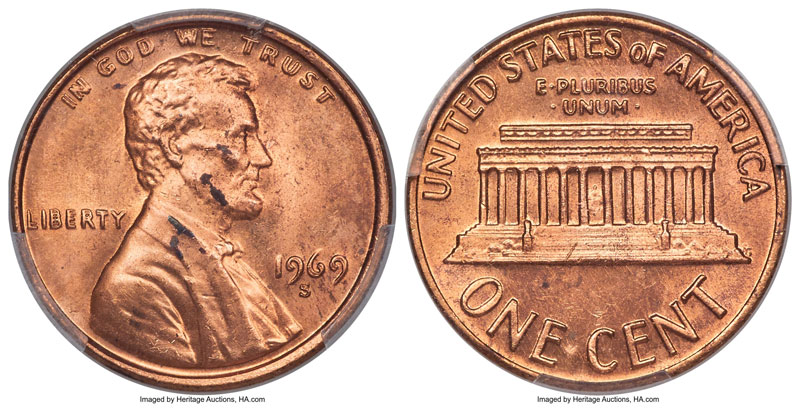 Graded 64 Red by PCGS, this coin has a fascinating back story.

Graded 64 Red by PCGS, this coin has a fascinating back story.

Every week, our coin staff at Heritage receives multiple inquiries from hopefuls who are searching their pocket change for treasures. One such lucky consignor has entrusted a modern rarity to Heritage for sale in January: a 1969-S Doubled Die Cent! This coin has been authenticated by PCGS and certified as an amazing MS64 Red. It will be featured in the June US Coin Auction #1331.

The 1969-S Doubled Die is the key coin to the Lincoln Memorial Cent series that began in 1959. The doubling is very obvious and can be seen by the naked eye--this is a major variety that is clearly visible even to the non-collector. Relatively few of these scarce pieces have been located and certified, making them a true prize for the Lincoln Cent or variety collector! When you look at this coin, you might feel that you have double vision.

Graded 64 Red by PCGS, this coin has a fascinating back story. The 1969-S is was one of the only coins to be famous for having once been believed to be a counterfeit. Coincidentally, this definitely-real variety was also copied to create an actual counterfeit--the 1969 Doubled Die without the "S" mintmark. Two men, Morton Goodman and Roy Gray, had begun making fake 1969 Doubled Die cents in 1969, which soon got them into legal trouble. They were striking and selling supposed "variety coins" that were actually just fakes and marketing them through a coin collector who first sold the fake coins for a profit but later turned Goodman and Gray in to the Secret Service! The Secret Service raided one of their homes in the "Summer of 69" as the song tells us, and they discovered incriminating evidence. Gray's home was full of the makings of the counterfeiter's art: planchets, machinery, and punches for coins to deceptively re-create what can only be made officially by the US Mint.

While agents continued investigating and proved the Goodman and Gray were guilty of counterfeiting, a real rarity was actually coming out of the woodwork through legal channels. While the 1969 Doubled Die with no mintmark is fake, the 1969-S Doubled Die from San Francisco is real and valuable! These rare coins were discovered, bit by bit, by both collectors and the Secret Service (who was searching for fake coins to take off the market after the Goodman and Gray scandal.) In the search for fake coins, the agents actually found some real ones!

However, this crazy crime story actually led to the true variety that Heritage is selling in the upcoming auction being rarer, because the Secret Service destroyed some of the REAL 1969-S Doubled Dies while culling out the FAKE 1969 coins from Goodman and Gray. While the counterfeiters ended up going to jail, their crimes actually led to a rare coin being even rarer!

While no one knows the mintage of the 1969-S Doubled Die for certain, some estimates say that less than 50 exist today. In addition, the example being offered by Heritage is in far nicer condition than is usually seen and had full red color! The last time a similar coin sold at Heritage 10+ years ago, it brought over $100,000. Relatively few are graded in any grade today, so don't miss your chance to get your hands on one here: https://coins.ha.com/itm/lincoln-cents/p/1331-58001.s