The author performs a further analysis of the silver dollar rarities in the Larry H. Miller Collection that was auctioned on December 17 by Stack's Bowers.

The second part of the Larry H. Miller Collection was auctioned on December 17 by Stack’s-Bowers at The Balboa Bay Resort in Newport Beach, California. The purpose here is to focus on early silver dollars that were the stars of the Miller II sale. Another review in an upcoming issue of the CPG® Coin & Currency Review will be about some of the really neat, though relatively inexpensive coins from the Larry Miller Collection in this same auction.

While coverage of coin auctions should not only be about expensive rarities and condition rarities, the Miller II sale had so many famous rarities, which had been ‘off the market’ for more than a dozen years, it is imperative that at least a couple of these be discussed publicly. Indeed, the Stickney-Eliasberg-Miller 1804 silver dollar is one of the most famous of all American coins. 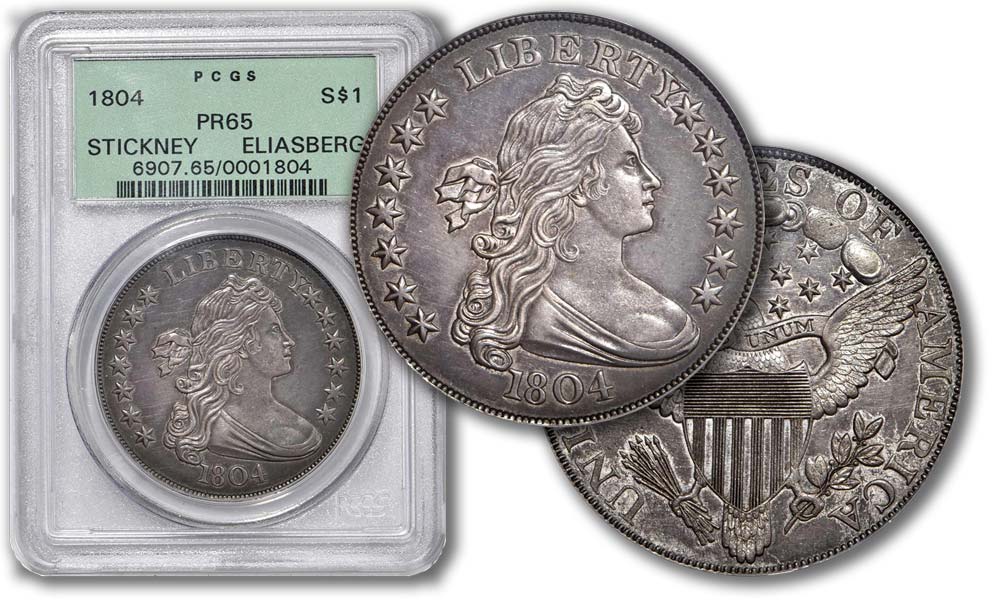 Larry Miller was fortunate to own both the Eliasberg 1804 silver dollar and the Eliasberg 1894-S dime, two of the three most famous rarities from the most famous coin collection of all time. In my roster of 1894-S dimes that was published online in July 2013, I demonstrated that only nine 1894-S dimes are currently known. Almost every other researcher had said that there were eleven or twelve! As far as I know, I was then the only researcher who insisted that just nine are known.

Also, I then provided information regarding owners and pertinent private transactions over the last thirty years. Admittedly, however, that roster needs to be revised. Additional auction results, observations and opinions need to be incorporated into the roster. Curiously, the Eliasberg-Miller 1894-S dime has naturally toned since its last public appearance and is more attractive in the present than it was before. Silver dollars, though, are the topic of the moment, as a majority of the famous coins in the Miller Collection were silver dollars.

Besides the silver dollars and eagles ($10 gold coins), all the coins in each of the diplomatic Proof or Special sets of 1834-35 were dated 1834, including a half cent, a large cent, silver denominations, a quarter eagle, and a half eagle. As a fully intact diplomatic Proof set does not survive, the precise contents of each such set remain a mystery. These sets were intended to be given to monarchs in Asia, and at least two were delivered. I discuss 1804 dollars in the January 2020 issue of the CDN Monthly Greysheet (Vol. III: No. 1, pp. 13-14).

The legend of 1804 dollars developed and grew long before much was widely known by collectors about the circumstances at the Philadelphia Mint during the 1830s. This same 1804 dollar commanded attention when the firm of Henry Chapman auctioned the collection of Matthew Stickney in June 1907. This 1804 dollar then realized $3,600, a record price for an 1804 dollar though much less than the price realized, $6,200, by the Brasher Doubloon in the same auction in 1907.

On April 8, 1997, a general auction record was set when the Stickney-Eliasberg 1804 realized $1,815,000 in the Eliasberg ’97 sale in New York by Bowers & Merena of New Hampshire. The previous auction record for any coin was established less than one year earlier in the Eliasberg ’96 sale. Jay Parrino paid $1,485,000 for the Eliasberg Collection 1913 Liberty Head nickel on May 21, 1996, which then became the first coin to sell at auction for more than $1 million.

The Stickney-Eliasberg-Miller 1804 dollar and the Eliasberg 1913 Liberty Head nickel are similar in that rarity, fame and pedigrees define the coins much more so than their physical characteristics. These are not among the most attractive of all U.S. coins, nor the most original.

The Stickney-Eliasberg-Miller 1804 was moderately to heavily cleaned very long ago and has since naturally retoned in a nice way. In actuality, the colors on this coin are more attractive than they appear to be in published images. There are shades of gray on much of the coin, but there are other colors, too. When the Stickney-Eliasberg-Miller 1804 is tilted at various angles, different hues and shades become evident. At some angles, the obverse is a brown, green and gray mixture with much green in the outer fields. The reverse is mostly a rich brown-russet with some blue tinted areas and appealing green peripheral toning.

Miss Liberty is a light gray, though parts of her hair naturally glisten. There is evidence that this coin was at least semi-cameo, perhaps fully cameo, when it was struck. Moreover, the toning is probably stable. The Eliasberg-Stickney-Miller 1804 dollar is a pleasant Great Rarity. 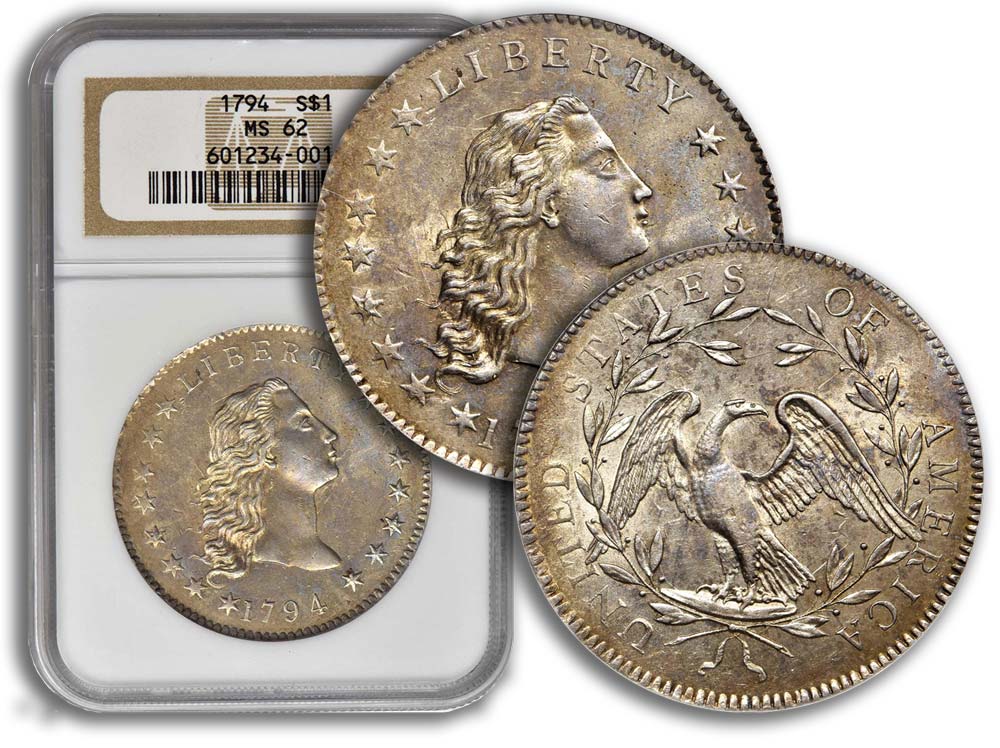 Although friction on highpoints is very clearly apparent, the Miller 1794 does and should have the value of a MS61 grade coin in my view, as its positive characteristics tend to pull the Miller 1794 away from 1794 dollars in the range of circulated grades. The tan-gray-brown blend is probably natural retoning after a dipping many decades ago. There are no distracting imperfections. The Miller 1794 is a particularly attractive coin overall.

I would like to see the Harry Bass 1794 dollar again before compiling a roster. While the color of the Connecticut Historical Society-Hesselgesser 1794 dollar is relatively more original and much more appealing, that coin has more friction and more mint-caused imperfections than the Miller 1794. In my view the Miller 1794 is superior overall to the Connecticut-Hesselgesser 1794 dollar, which has been certified as AU58 by PCGS, NGC and CAC. 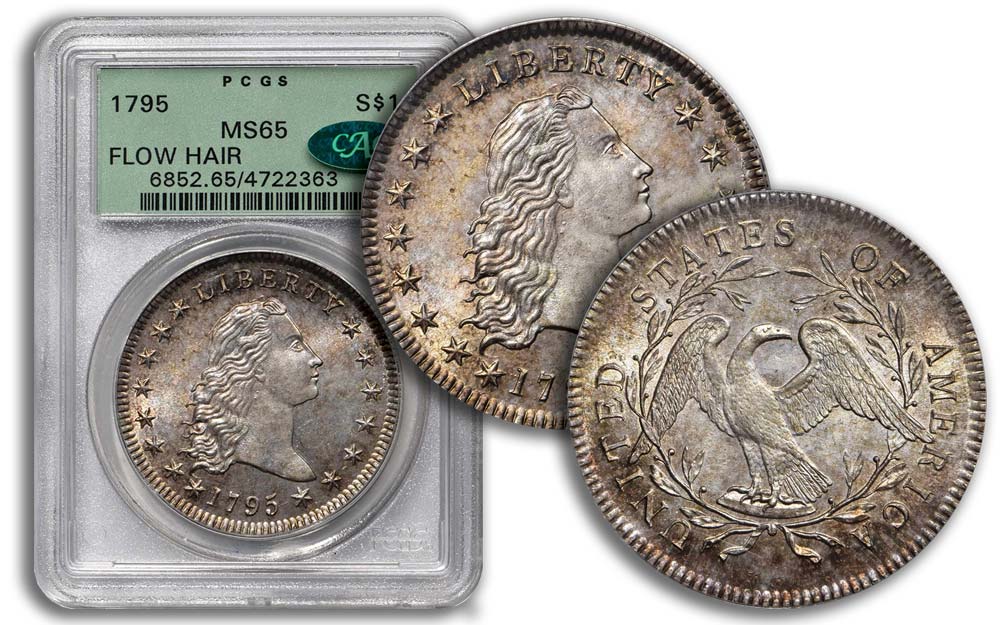 One of the strongest prices in the whole auction was the $576,000 result for a CAC approved, PCGS graded MS65 1795 Two Leaves silver dollar. The number of leaves directly below each of the eagle’s wings defines the two major varieties of 1795 Flowing Hair silver dollars.

I disclose here a conflict of interest as I was asked by a client for a report about this coin prior to the auction. Before the auction, I said that this coin should be worth a price commensurate with a grade in low to mid MS65 range, though it could very well bring a higher amount in the auction. I asserted then that I would not be startled if two serious bidders each grade the coin as MS65+ or 66. While I understand such an interpretation of this coin, I regard it as a gem but not as a superb gem.

As for why this coin brought $576,000, three explanations come to mind:

Collecting both: my second theory is that at least one serious bidder was demanding both 1795 Flowing Hair Three Leaves and Two Leaves silver dollars that grade MS65 or higher and are satisfactory to the respective buyer. It would be difficult to obtain 1795 Two Leaves and 1795 Three Leaves dollars that most experts would regard as being of gem quality or nearly so. This Miller Collection coin is superior to the two PCGS graded MS65 1795 Two Leaves dollars that were in the Pogue Family Collection. On September 30, 2105, these two Pogue coins realized $282,000 and $258,500, respectively. Market levels were higher in September 2015 than they were in December 2020. The difference in quality between the Miller Two Leaves dollar and the Pogue Two Leaves dollars may be a prime determinant of the price realized on December 17, 2020, especially if a gem Two Leaves 1795 dollar was being sought.

Upgrade potential: a third theory is that a grading wholesaler could have figured that the probability of this coin upgrading at PCGS was such that it made mathematical sense to pay more than $550,000 for it. They could have factored bids while analyzing probabilities and associated expected values of this coin being upgraded to MS66 by PCGS or at least to MS65+. I hope this third theory is not true.

The most interesting aspect of theorizing about this auction result is the possibility that a Two Leaves 1795 may in theory be worth much more than an equivalent 1795 Flowing Hair Three Leaves dollar. Although the Two Leaves variety is scarcer in mint state grades, most collectors of choice to gem uncirculated silver dollars in the past sought just one or the other and did not feel a need to obtain representatives of both major varieties in choice to gem grades. Also, collectors assembling type sets are usually not concerned about the number of leaves on the reverse of a 1795 dollar.

A puzzling price realized should not deflect attention from the fact that this is an excellent coin and a very important condition rarity. The reverse of the Miller Collection, 1795 Flowing Hair Two Leaves Dollar is technically amazing. Overall, it is very attractive. I hope that the new owner is a collector who understands and cherishes this coin.

In regard to the quality of rare coins, there will always be legitimate differences of opinion among experts, though most pertinent experts will not publicly and honestly reveal their respective opinions. I suggest that collectors seek to learn about coins and ask penetrating questions. While price guides and knowledgeable consultants are useful, a collector of expensive coins should think carefully about how much each individual rare coin is worth to him or her.

Subscribe to February 2021 edition of Monthly Greysheet for the industry's most respected pricing and to read more articles just like this.

A question in the form or a comment. I am unfamiliar with the differences between the terms wear, friction (which to me is the usual cause of wear) and, though not used in the article so as to catch my notice, perhaps even rub. I do recall the term cabinet wear, which suggested, to me, handling by owners, curators, and admirers since I had doubt that a coin simply sitting in a cabinet actually suffered wear as a coin in circulation would. But then I recall a published story about a 1913 Liberty nickel described as uncirculated that the owner would carry in his pocket and show around to other patrons at his local tavern. Basically, all of this causes me to wonder if there is a difference between ordinary coins and the wear then caused by the hoi polloi at stores and banks, and elite coins when the wear/friction/rub caused was caused by cabinets, owners, and admirers who used ungloved fingers and probably palms on coins unprotected by thick plastic.