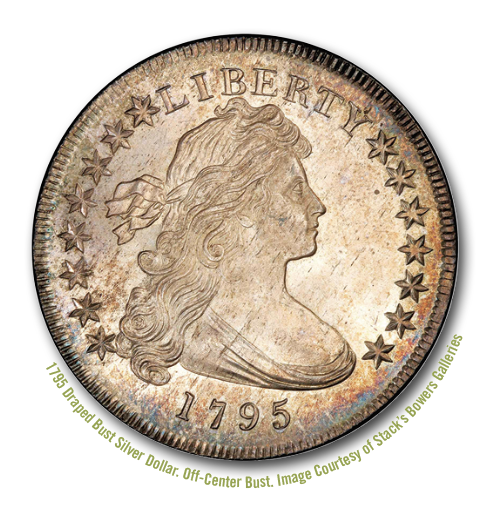 Part 2 of Greg Reynolds series analysis on the draped bust silver dollars that were issued from 1795-98. These are also know as "small eagle reverse" dollars and quite popular among collectors.


This article appeared in print in the November 2019 issue of The Monthly Greysheet.

From 1795 to 1798, silver dollars were minted with a Draped Bust obverse and a so called ‘Small Eagle’ reverse. This eagle motif is not really small; it is just called a small eagle to distinguish it from the grand style ‘Heraldic Eagle’ reverse that was introduced later. A list of design types of silver dollars appears in my article in last month’s Greysheet.

Of Draped Bust, Small Eagle silver dollars, ten major varieties are listed in the Greysheet and these are widely accepted: 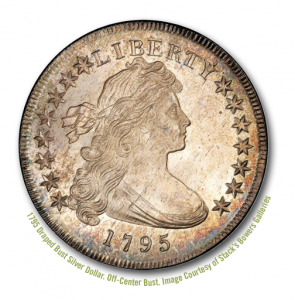 The names “Small Letters” and “Large Letters” refer to the size of the letters in the legend, ‘UNITED STATES OF AMERICA,’ on the reverse. The difference in size is readily noticeable, and the large letters are much closer to nearby dentils.

The notation ‘9×7′ refers to obverse dies where nine stars are at the left of the collector viewing the coin and seven stars are at the right. There are thus nine stars to the left of the letters of Liberty and seven to the right, for a total of sixteen, the number of states in the union at the time. On June 1, 1796, Tennessee became the sixteenth state. The notation ’10×6’ refers to an arrangement where ten stars are on the left and the other six stars are on the right, from the perspective of someone viewing coins.

More than one thousand 1795 Draped Bust silver dollars exist in the present. For the off-center variety, the bust of Miss Liberty was accidentally punched too far to the left, and her hair touches or just about touches the first star. A ribbon is close to the fifth star. There is a considerable amount of space between Miss Liberty’s face and the stars at the right. On the centered bust variety, a garment on Miss Liberty’s chest touches or just about touches the the sixteenth star, the bottom star at the right. On the off-center bust variety, in contrast, there is noticeable space between the sixteenth star and Miss Liberty’s chest.

According to the September Greysheet, the centered bust and off-center 1795 Draped Bust dollars are worth around the same amounts in grades from G4 to AU50. My view, in contrast, is that, all other factors being more or less equal, the centered bust 1795 dollars are significantly scarcer and are worth more in most all grades. Indeed, the Centered bust 1795 dollars tend to bring more at auction, but the physical characteristics of each individual 1795 Draped Bust dollar affect its value more so than whether it is a centered bust or an off-center bust variety. 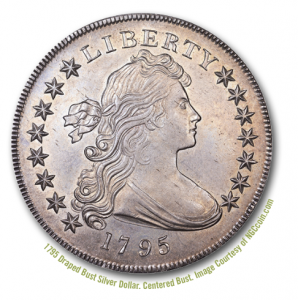 PCGS did not distinguish centered from off-center busts in their data for many years. Consequently, the PCGS population now for centered bust 1795 Draped Bust dollars includes a substantial number of off-center bust dollars that were graded before these two varieties were classified separately at PCGS.

It makes sense to list a few public auction and Internet sale results to provide an idea of current values and availability. It is important to keep in mind that each coin is distinctive and bidding competition varies in magnitude and depth. Auction results should not be thought of as conclusive indicators of wholesale or retail values; auction prices need to be analyzed along with additional information.

In uncirculated grades, 1795 dollars are the least rare of the Draped Bust, Small Eagle design type. For the whole design type, PCGS has assigned mint state grades (MS60 or higher) to only sixty-two coins, and NGC to sixty-nine coins. The combined total of one hundred and thirty-one probably amounts to fifty-five to seventy different coins. There is much demand for these, and collectors should consult experts before acquiring one. Prices may range from $60,000 to more than $1 million!

As all 1796 dollars with a Large Date on the obverse have “Small Letters” on the reverse, there is no need to mention the small letters when referring to the large date. On August 14, 2019, Stack’s-Bowers sold a PCGS graded VF30 coin for $4080. Almost exactly one year earlier, Stack’s-Bowers auctioned an NGC graded XF45 1796 Large Date for $7,800.

The 1797 9×7 stars obverse, Small Letters reverse, major variety is worth a substantial premium over the 1797 9×7, Large Letters and over the 1797 10×6. This premium tends to be very substantial, percentage-wise, for coins that grade above XF40.

I estimate that fewer than one hundred and thirty different 1797 9×7 Small Letters dollars have been assigned numerical grades by PCGS or NGC, and another forty-five to sixty-five coins have been or would be found to be non-gradable by both services. It is noteworthy that just nine have received stickers of approval from CAC.

There is only one mint state 1797 9×7 Small Letters silver dollar certified by PCGS or NGC, and it is the only uncirculated representative of this major variety that I have ever seen or heard about. It was NGC graded MS64 and CAC approved before the auction of  most of Eric Newman’s early U.S. silver coins in November 2013. This 1797 9×7 Small Letters dollar then realized $381,875.

In sum, a set of all ten major varieties of Draped Bust, Small Eagle silver dollars is a practical objective. Not one is an extreme rarity.

Collectors focusing upon coins that grade above AU53 should hire at least one expert for advice and other services. Analyzing high grade early U.S. coins is very difficult and requires years of experience.

A collector who builds a set without a paid consultant should endeavor to personally examine a large number of bust dollars, and to ask many pertinent questions. Invariably, most early silver dollars have been cleaned or mistreated at one time or another. It is important to discuss the nature and degree of past cleanings, dippings, and natural retoning. For well circulated pieces, mildly awkward colors stemming from past cleanings are considered normal and are usually not that important.

It is fortunate that thousands of Draped Bust, Small Eagle silver dollars survive. These attractive, 18th century U.S. coins may be studied and enjoyed by a substantial number of collectors and other coin enthusiasts.