Sotheby’s is set to offer the earliest securely dated example of the very first postage stamp – one of the most significant inventions in human history, the precursor of mass and global communication as well as the keystone and lynchpin of one of the world’s most popular collecting disciplines. 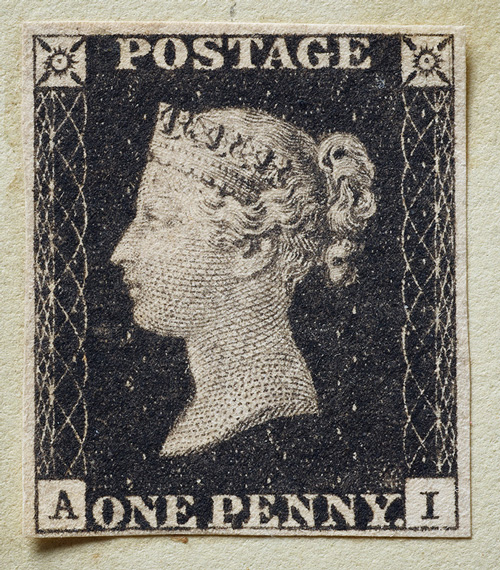 LONDON, 26 OCTOBER 2021 – Sotheby’s is set to offer the earliest securely dated example of the very first postage stamp – one of the most significant inventions in human history, the precursor of mass and global communication as well as the keystone and lynchpin of one of the world’s most popular collecting disciplines.

Dating to 1840, this small Penny Black – a pristine impression, unused, and from plate 1a (the very first printed sheet) and lettered A-I – represents the birth of a device that would be central to the birth of mass communications across the globe for more than a century and a half and that still has not been completely supplanted by newer technologies.

Rediscovered nearly three decades ago but not fully recognised until much more recently, the stamp’s identification began when British businessman and philatelist Alan Holyoake came into the possession of The Wallace Document, to which the stamp is attached, almost ten years ago (more details below).

Holyoake was to instigate a three-year research project – which culminated with the document being issued with certificates of authenticity from The Royal Philatelic Society, London (2016) and The British Philatelic Association (2015), and its subsequent exhibition at the Smithsonian National Postal Museum in Washington DC. It will now be offered at Sotheby’s in London on 7 December 2021, with an estimate of £4 – 6 million, as part of a sale of ‘Treasures’.

“This is THE FIRST ever stamp, the precursor to all stamps, and unequivocally the most important piece of philatelic history to exist. Though there are many hugely important stamps in collections both public and private around the world, this is the stamp that started the postage system as we know it. The Wallace Document represents the very dawn of social communication, and this stamp was a game-changer, allowing people to communicate from all levels of society and business to flourish.” 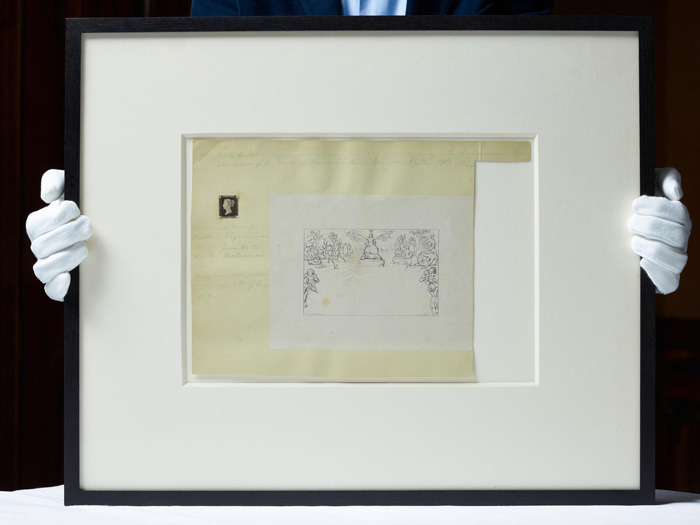 The History of The Penny Black

Before 1840 it was the recipient who paid the cost of postage but, in a complete reversal of thinking, a competition was held to determine the best method to provide proof that the sender had paid. The eventual front runners were the Mulready and the Penny Black. Designed to be complementary, the public infinitely preferred the Penny Black.

The progenitor of tens of thousands of other
stamps from numerous countries around the
globe, the Penny Black is known the world over.
Its design is simple: a small and now iconic portrait
of the young Queen Victoria’s head in profile with
the words Postage One Penny and a pair of check letters on handmade watermarked paper with gum on the back. The idea of an adhesive postage label was revolutionary at the time.

Central to these reforms during the preceding decade was Member of Parliament Robert Wallace, who was successful in setting up a commission responsible for postal reform, eventually working with Rowland Hill. 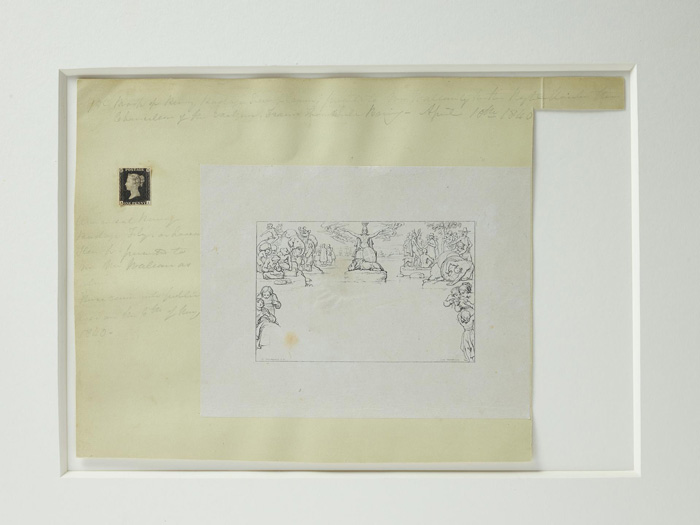 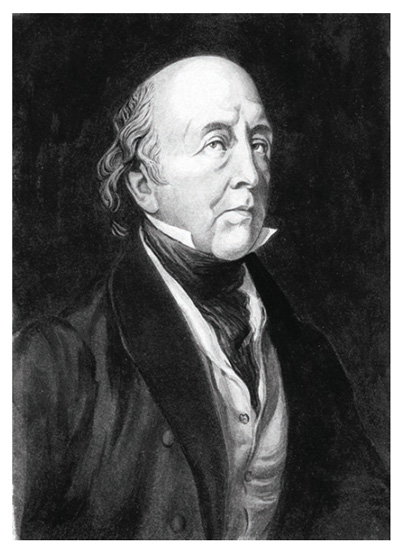 ‘The Wallace Document’, which will be offered for sale at Sotheby’s, is considered the most important piece of philatelic history in the world. Dated April 10th 1840, it comes from a now dispersed personal scrap-album assembled by leading British postal reformer and MP Robert Wallace, and brings together two highly important philatelic artefacts: the Penny Black and a proof of the ‘Mulready Stationery’ that had been commissioned by the government as an alternative means to prepay postage. Both were given to him in thanks by the Chancellor of the Exchequer, Francis Baring, for everything that Wallace had done to overhaul the postal system and bring these new innovations to fruition.

Written on the paper in Wallace’s own hand are notes reading:

“Universal Penny Postage Fly or Loose Stamp, presented to me Mr. Wallace as above.”

“These come into public use on the 6th of May.”

The resulting display of the two complementary inventions, dated and endorsed by Wallace in pencil, became known as ‘The Wallace Document’, which today is regarded as the most precious relic in philately – and yet it is also an object whose significance extends far beyond the world of postage stamps.

The Wallace correspondence subsequently passed to the Caldwell family in Scotland in 1855. In 1991 it was consigned to Cavendish Philatelic Auctions who sold it to an overseas buyer in its entirety. It was then broken up and the three major pieces, including the Wallace Document, were separated.

Commissioned by the government in tandem with the Penny Blacks as part of the postal reform, these official envelopes and covers, with designs by artist William Mulready R.A. were originally conceived as the best and primary way for the public to prepay postage. At the time, the Penny Black was seen as secondary to the stationery – as simply a means of paying excess postage on the Mulready envelopes and wrappers. However, the scale of the stationery production versus the small stamps proved untenable, and the Penny Black prevailed.

It is perhaps ironic that the Mulready design was conceived on Friday the 13th and the first completed proof was delivered on April Fools’ Day. Offered for sale to the public on May 1st the ill-fated Mulready was immediately ridiculed by the public and almost immediately caricatures appeared lampooning the design.

The presentation of the Mulready proof, together with the Penny Black, in the Wallace Document, commemorates the first time it was possible to see how the finished articles complemented one another. 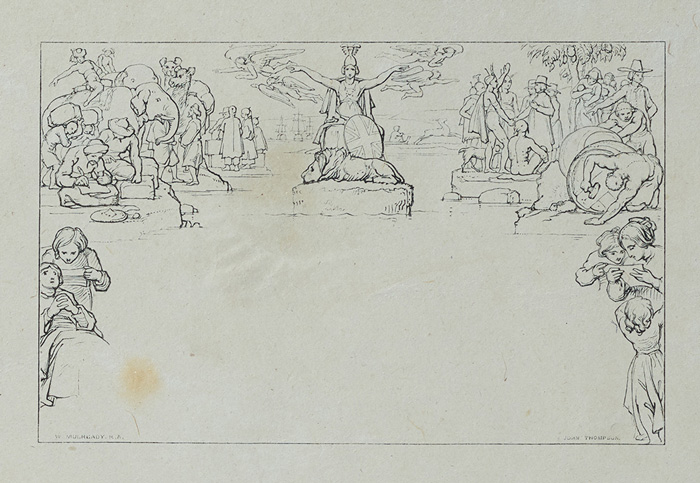 The History of the Postal Service

Prior to the establishment of the mails, the only systems for delivering letters resided with messengers in the employ of either the King, the Church, or the Universities. The first Master of the Posts was created by Henry VIII around 1512, responsible for overseeing the King’s messengers and the transportation of all official mail in and out of the country. Although it was expressly forbidden, these messengers began to carry private letters and, by the end of the century, the growing merchant class had created their own private services. To counter this Queen Elizabeth I proclaimed all mail had to pass through official channels —in essence this meant that all letters could be opened and read.

In 1635 the first internal service was set up by Charles I to deliver mail between the major cities of England, Scotland, Wales and Ireland. Later named the General Post Office by Oliver Cromwell in 1657, the government still retained the right to open any letters in defence of “plots against the government.”

During the seventeenth and eighteenth centuries the mail was carried by relay up and down the country by teams of carriers on foot and horse from one point, or post, to another. At first, letters were only transported between post offices. Upon arrival they were collected and paid for by the recipient, the cost depending on the Treasury who regulated the postage rates and changed them regularly.

Until the dawn of the Victorian era the General Post Office would remain a staid yet profitable bastion of the Treasury and was such a good source of revenue that whenever the government needed money, the public was made to pay through higher postage rates. 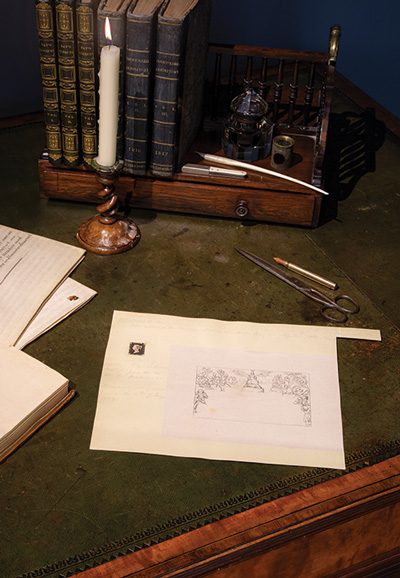 Established in 1744, Sotheby’s is the world’s premier destination for art and luxury. Sotheby’s promotes access, connoisseurship and preservation of fine art and rare objects through auctions and buy-now channels including private sales, e-commerce and retail. Our trusted global marketplace is supported by an industry-leading technology platform and a network of specialists spanning 40 countries and 50 categories, which include Contemporary Art, Modern and Impressionist Art, Old Masters, Chinese Works of Art, Jewelry, Watches, Wine and Spirits, and Interiors, among many others.