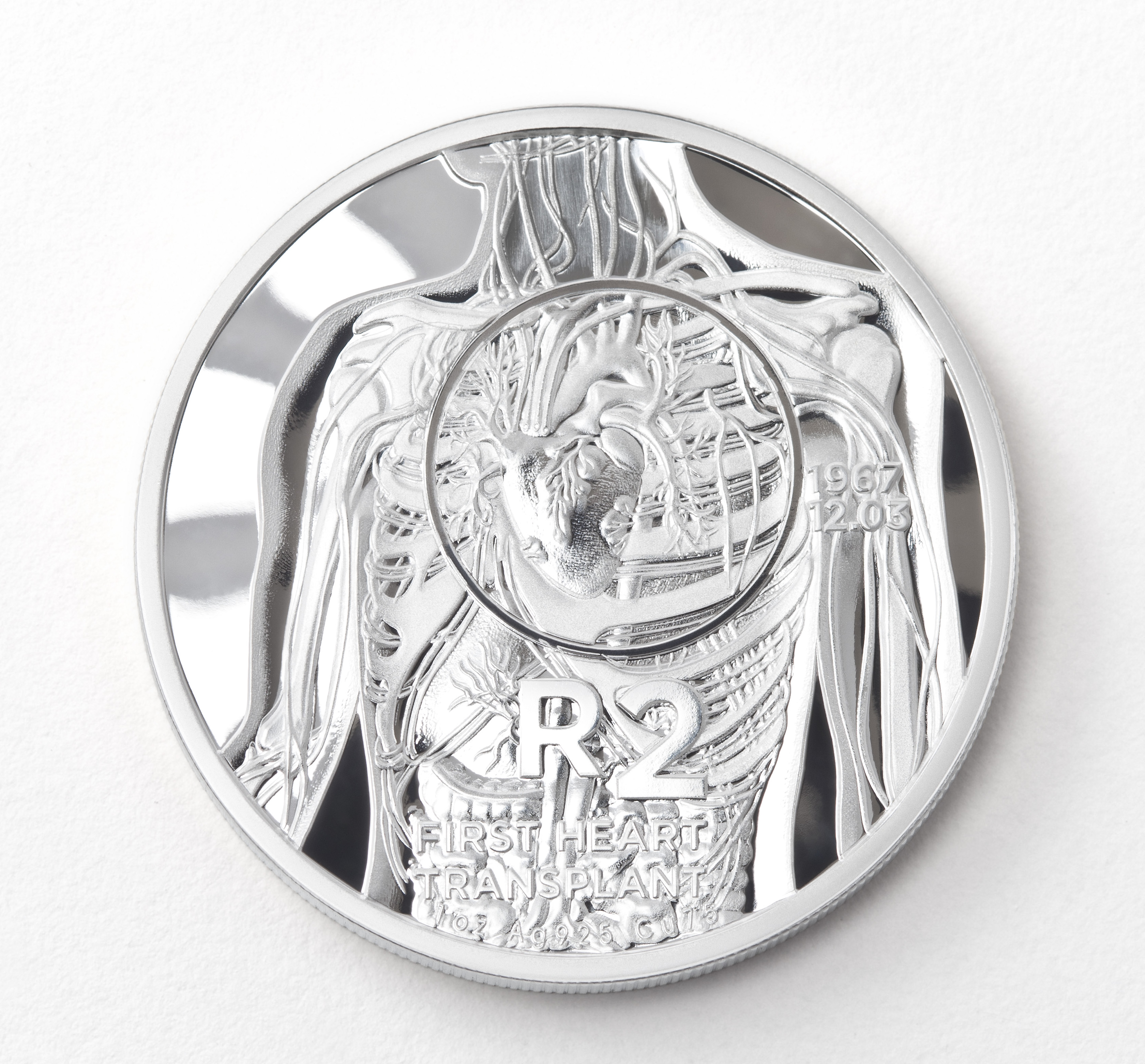 The South African Mint, a wholly owned subsidiary of the South African Reserve Bank (SARB) wowed the jury in Berlin picking up the top honours in the Best Contemporary Event category at the 2019 Krause Publications’ Coin of the Year (COTY) awards. The SA Mint won the accolade for its R2 Crown coin depicting the world’s first successful human-to-human heart transplant.

The R2 Crown coin in sterling silver is the second release in the South African Inventions coin programme following “the dolos” and marks the 50th anniversary of the historic event. Introduced in 2016, the series seeks to showcase local innovations that have captured the world’s imagination.

The Best Contemporary Event category recognises coins which commemorate events, institutions, physical entities or individuals which are deemed to be most important in terms of current or recent events influencing people or mankind. Five decades later, approximately 4000 people undergo heart transplants each year.

Instituted by Wisconsin-based Krause Publications, The Coin of the Year Award honours the accomplishments of mints from around the world in numismatic design, artistic vision, craftsmanship and marketing efforts. A panel of international judges choose the coins from those issued two years prior to the year of the award.

Awards are given in ten categories, and three coins are selected in each category. Besides the Best Contemporary Event, popular categories include Best Gold, Best Circulation Coin, Most Artistic Coin and the coveted overall Coin of The Year.

Dr Christiaan Barnard performed the marathon surgery transplanting Denise Darvall’s heart into the recipient Louis Washkansy, a 53 year old grocer with a debilitating heart condition. The young Ms Darvall was run over by a car on 02 December and had been declared brain dead. The surgery lasted almost 6 hours by the end of which Washkansy was able to talk. He lived for almost three weeks following the operation eventually succumbing to pneumonia.

The event turned both Dr Barnard and the Groote Schuur Hospital in Cape Town where the procedure was performed into global household names.

“The Inventions series captures the ingenuity and the remarkable contributions of South Africans across various fields and is yet another example of the Mint’s commitment to preserving and celebrating South Africa’s history,” says Tumi Tsehlo, MD, South African Mint.

“In the world of collectable coins, beauty is the very essence of its existence and not just skin deep. This recognition elevates the reputation of our craftsmanship and calibre of manufacturing, areas where SA Mint continues to make investments and strides. The award is a testament to the same.”

The obverse of the coin features South Africa’s national flower, the King Protea occupying the central position along with the words ‘South Africa’ and the year ‘2017’.

The reverse of the 1oz sterling-silver coin depicts a detailed human torso modelled on the anatomically-precise drawing by artist Carl Jeppe, with all its veins, skeleton, organs and a prominent circle indicating the position of the heart. The genius behind the circle is that it fits a smaller Tickey coin whose design depicts the human heart, simulating a ‘heart transplant’.

The Crown and Tickey coins are the brainchild of South African Mint’s Head of Product Development Richard Stone whose design thinking and practical application pays an innovative tribute to a feat that pushed the boundaries of medical potential and imagination.

Immortalising the medical milestone is a canvas painting on permanent display at the South African Mint Museum. The art piece by revered local painter Anton Karstel, recreates the miracle moment on canvas. The painting, a monochromatic study of the first transplant carries the weight of the occasion dramatised on the patient Louis Washkansky’s face.

The limited mintage, only 1000, of the 2017 South African Inventions sterling-silver individual R2 crown coins and the single 2½ c sterling-silver Tickey coins lend it a degree of rarity. Only 700 coin sets were produced, comprising of the R2 crown-sized coin, and a 2½ c Tickey coin, accompanied by a sterling-silver model of human heart  packaged in a beautiful walnut wood box with piano finish varnish.

“The awards are held high in the industry and we are delighted at this recognition for our relatively young South African Inventions coin programme that proudly takes South African stories to the world,” says Tsehlo in conclusion.

As the only exporting Mint in Africa, the win for South African Mint is significant and demonstrates the Mint’s global ambitions. The Mint’s pervasiveness in the coin world is evident from the categories it was nominated for this year including Best Gold Coin for the R50 featuring Two Leaping Springboks, Best Inspirational Coin for the R5 Gold Mandela coin as well as Best Crown Coin for the R1 Silver Krugerrand and Best Innovative Coin for the 1/50 Gold Krugerrand, both launched to mark the iconic Krugerrand’s 50th anniversary.

The only other recognition for the continent came in the form of Best Circulation Coin produced by Monnaie de Paris for the Central Bank of Mauritania. The coin won for its innovative use of metal as it is the first time a circulation coin has been produced using three metals. The Paris based mint also took home the overall coveted Coin Of The Year award, while other big winners on the day were the Austrian Mint and the US Mint.