One of the greatest error coins known, the 1886 Morgan Silver Dollar Obverse Die Cap PCGS MS-64 has been consigned to GreatCollections and will be sold without reserve in the January 9, 2022 auction. 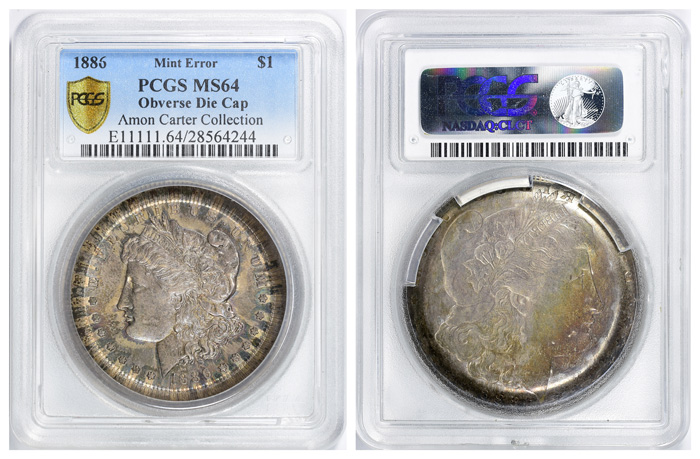 (Irvine, California) November 29, 2021 – One of the greatest error coins known, the 1886 Morgan Silver Dollar Obverse Die Cap PCGS MS-64 has been consigned to GreatCollections and will be sold without reserve in the January 9, 2022 auction.

Viewed at an angle, the coin has a high, curved rim that appears like an ashtray and is the finest of only two Morgan Dollars known with this type of error (the other is dated 1903 and graded PCGS AU-50). It was likely struck 4-6 times, and the full reverse brockage shows an enlarged head on the reverse, in offset, facing right, is clear and defined.

A die cap is caused when a coin gets stuck in the upper hammer die. As more coins are struck, the reverse of the struck coin becomes the new die face and the multiple impressions of the coin spreads the planchet with curled edges resembling a bowl.

Ian Russell, president of GreatCollections said “we are so privileged to be auctioning this important error coin. Back when I first met preeminent error expert Fred Weinberg about 18 years ago, I had asked him what he considered the best U.S. error coins to be. Our hour-long conversation about the top few error coins included discussion about this very coin. At the time, Fred had not seen the coin in over 35 years, yet he remembered it as if it was yesterday.”

Weinberg recalls seeing the error first at a Hollywood, California coin show in 1967. “The 1886 Die Cap is the first major error coin that I specifically remember from 1967, that I did not see again until the Portland ANA, March 2015. At the 1967 Error-A-Rama Coin Show, a dealer by the name of Roy Gray priced the coin at $1,000 - a huge number for any type of error coin, including 1943 Copper Cents.”

“Mr. Carter owned some of the most revered coins and banknotes in numismatics, and for this 1886 Morgan Die Cap Error to be one of his personal favorites speaks volumes about the coin’s importance. Prior to Carter, it was also part of the Virgil Brand collection,” continued Russell.

This coin was the subject of an article in The Numismatist (August 2015) written by John Dannreuther where he calls it the “king of the series” and “the most spectacular Morgan dollar error of all time.”

Amon G. Carter, Jr. (1919-1982) assembled one of the finest and most complete collections of U.S. coins and paper money ever assembled. His collection included major rarities such as the 1794 Silver Dollar graded PCGS SP-66, the first coin to sell for over $10 million in auction, not to mention an 1804 Silver Dollar, 1870-S Silver Dollar, 1884 & 1885 Proof Trade Dollars among many other major rarities. GreatCollections recently sold another famous coin from the Carter Collection, the unique 1855 $20 Wass-Molitor Large Head graded PCGS AU-50 CAC which realized $568,125.

The 1886 Morgan Silver Dollar Die Cap Error PCGS MS-64 is being sold without reserve on Sunday, January 9, 2022. The detailed description with further background on the coin and professional images can be viewed at www.greatcollections.com. For more information, contact GreatCollections at 1-800-442-6467 or e-mail info@greatcollections.com.