The sale presented over 8,000 lots, ensuring that collectors across the numismatic spectrum had plenty of options. Over 96.5% of all lots offered found their way into new collections. 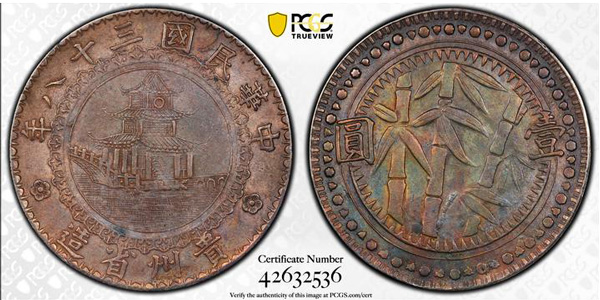 Costa Mesa, CA -- After 13 separate sessions comprising world and ancient coins along with world paper money, the Stack’s Bowers and Ponterio September Hong Kong Auction realized in excess of $33 million, double the published high estimate, proving that Stack’s Bowers’ market prices generate excellent results for their consignors and customers. The sale presented over 8,000 lots, ensuring that collectors across the numismatic spectrum had plenty of options. Over 96.5% of all lots offered found their way into new collections.

Several prices realized stand out among European coins, including an Austrian 1908 100 Corona Proof that soared past its estimate to close at $16,200. A 1930-B British Trade Dollar certified as MS-66 more than doubled its pre-auction estimate to reach $13,200, and an ever in demand British 1937 5 Pound Coronation Proof brought $21,600.

The upward trajectory of the South East Asian market continues with strong prices reflected in the Philippines section. A countermarked Mexican Real applied in the Philippines between 1834 and 1837 outpaced its low estimate by a factor of 10, selling for $50,400. A stunning French Indo-China proof set from 1900 and a 50 Cent issue from the Straits Settlements with the rare incuse B mint mark both shattered their estimates bringing $43,200 and $14,400 respectively.

Realizing over $2 million of the final sale total, the world paper money was highlighted by a People’s Republic of China 100 Yuan note graded Gem Uncirculated 65 EPQ from the Hobart Collection that shattered its $10,000-$15,000 estimate selling for $44,400. The strong Asian market was evidenced by a 1945 Japanese Specimen 1000 Yen banknote certified About Uncirculated 55 by PMG that reached $7,800, more than four times its high estimate of $1,750.

With this exceptionally successful sale completed, the focus of Stack’s Bowers Galleries turns to the inaugural Hong Kong Asian Coins and Paper Money Collectors Choice Auction set for December 1-3, 2021. In addition, Stack’s Bowers and Ponterio is now accepting consignments for their April 2022 Hong Kong Auction. Anyone interested in consigning world coins and paper money to Stack’s Bowers Galleries’ April 2022 Hong Kong Auction or one of the firm’s Collectors Choice Online Auctions is encouraged to call 800-458-4646, email consign@stacksbowers.com, or visit https://www.stacksbowers.com/Pages/Home.aspx .