Stack’s Bowers and Ponterio is pleased to announce that extremely rare and recently identified numismatic treasures will be auctioned at their Hong Kong Collectors Choice Online Auction, December 1-3, 2021. 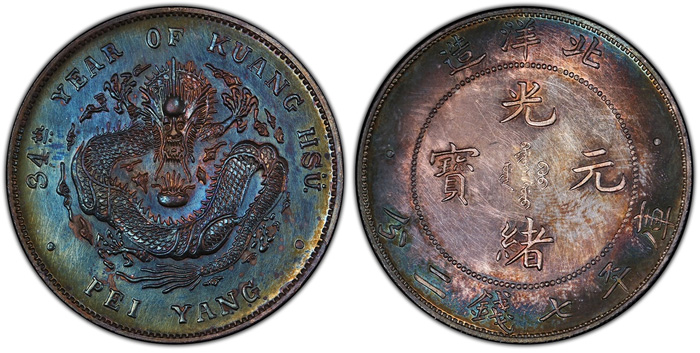 Costa Mesa, CA -- Stack’s Bowers and Ponterio is pleased to announce that extremely rare and recently identified numismatic treasures will be auctioned at their Hong Kong Collectors Choice Online Auction, December 1-3, 2021. The first is a stunning Empire Dollar (L&M-11 KM-Y-14) from 1908, graded SPECIMEN-64+ by PCGS. These immensely popular dollars attract significant collector excitement when found in Mint State. In Specimen quality they are nearly unheard of, this being only the second that PCGS has graded and the first to ever appear on the market. Displaying reflective fields and incredible blue toning, this coin offers a level of refinement not present on standard circulation strikes. Alongside this incredible rarity will be featured the lone PCGS certified Specimen-quality Year 34 (1908) Provincial Dollar from Chihli (Pei Yang) (L&M-465 KM-Y-73.2). The offered example is graded SPECIMEN-64 by PCGS and offers quality and beautiful toning that is similar to the Empire Dollar.

Little is known about the past ownership of these magnificent items, with the only record found being a pedigree tying them to a December 7-8, 1973, Lester Merkin auction of “Foreign Gold and Silver Coins.” In that sale both were graded as “Gem Unc”, with the Chihli issue in lot 226, and the Empire Dollar in lot 228. Considering their great rarity, it is hard to fault Merkin for not identifying them as presentation pieces; however, his awarding of the sparingly used “Gem Unc, conveys his opinion of their quality. Off the market since that time, their appearance in the December Hong Kong Collectors Choice Auction, properly attributed and described, will mark the first time in nearly a half century that these coins will be available to the general public.

As with any such special numismatic piece, there remains a question as to why these special strikes were produced in the first place? Were they show pieces or samples? Were they gifts to a politician or dignitary? While any answer is merely informed speculation, what is not speculation is the history surrounding these coins. At the turn of the 20th century, China, having been ruled by the Qing Dynasty since 1644, was losing ground in the race for Asian hegemony to the rapidly industrializing Japan. The Boxer rebellion failed in its attempt to evict all foreigners from China, and the imperial rule that had held sway over China for two millennia began to crumble. The death of the Guangxu Emperor, the symbolic ruler of China, in 1908 was the beginning of the end for the Qing dynasty. The next day, the de facto ruler of China, the Empress Dowager Cixi, died, throwing China into a succession crisis. Two-year-old Puyi, nephew of the Guangxu Emperor, was appointed as emperor, though his abdication would be forced less than three years later, before he officially took the throne. War followed, and conflict for China—in one fashion or another—never fully ceased until the end of the Chinese Civil War in 1949. 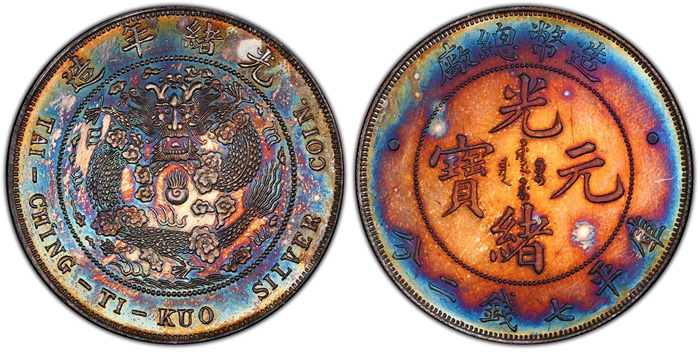 These dollars tell the story of an Empire at a crossroads and are historical gems that are worthy of a museum. Both survived the collapse of the Qing Dynasty, the Warlord Era, the Chinese Civil War, and the Second-Sino Japanese War in pristine condition. They are among the many highlights from the upcoming December Hong Kong Collectors Choice Online Auction that features a wide array of Chinese and Asian coins and banknotes. This online auction, presented from December 1-3, is sure to attract the attention of all those interested in Asian Numismatics, and will be the capstone of a milestone year of world coin auctions presented by Stack’s Bowers and Ponterio.