To Be Held Live in Baltimore at the Whitman Coin &amp; Collectibles Expo / C4 Annual Convention 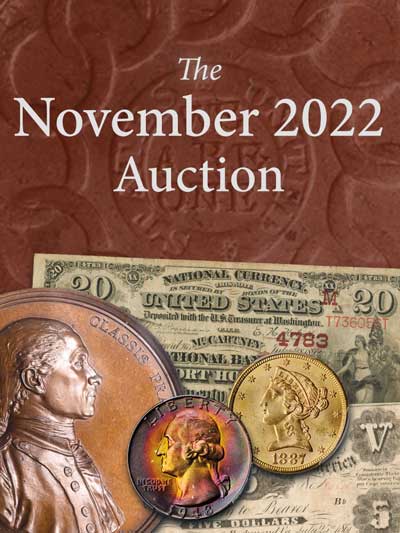 Costa Mesa, CA – Stack’s Bowers Galleries will present the second installment in the sale of the vast Sydney F. Martin Collection of early American coins, tokens, medals, and paper money in its October/November 2022 Showcase Auction, the official auction of the Whitman Coin & Collectibles Expo and the C4 (Colonial Coin Collectors Club) Annual Convention. In the spirit of Martin’s longtime support of and enthusiastic participation in the C4 organization, the auction will be held live and in person at the Whitman Expo in Baltimore, MD where the club holds its annual convention.

Part II of the Sydney F. Martin Collection sale will feature frontline collections from four areas of early American numismatics upon which Martin has left a lasting impact, whether through his authorship of seminal reference works, or by his unprecedented collecting achievements. Included will be French Colonial coinage, Rosa Americana coinage, 1785 and 1786 Connecticut coppers, and Washingtoniana. “What Syd accomplished in his collection and research of French Colonial coinage is extraordinary for its scope and depth,” noted John Kraljevich, lead cataloger for the Syd Martin Collection, “drawing together the myriad coinages that together tell the complex and fascinating story of French expansion in the New World.” Martin’s collecting and study of French Colonial coinage culminated in his 2015 work French Coinage Specifically for Colonial America, which provided an authoritative historical account of these coinages while also revolutionizing their collectability through his cataloging of die varieties. Highlighting the French Colonial section is an extensive offering of the rare 1670 issues, including the finest certified 1670-A 15 sols (PCGS AU-53) and the legendary, unique 1670-A copper double de l’Amerique Francois, the earliest dated coin bearing the name “America.”

Martin was also author of the standard reference on the Rosa Americana series, publishing The Rosa Americana Coinage of William Wood in 2011, and his frontline collection will be offered in this sale. Senior Numismatist and cataloger Kevin Vinton commented: “Syd’s is the definitive collection of the series. It is by far the most complete set of Rosa Americana coins ever assembled. Included are every variety of the Pre-Patent coins of 1717, all the major Red Book types, an incredible assortment of rare and unusual patterns and trials, and nearly all of the die varieties cataloged in the Martin reference.” Among the many highlights in the Rosa Americana offering are the finer of two known Undated (1722) No Ribbon Twopence graded PCGS AU-58, the famous “Iron Rosa” Undated (1722) Pattern Twopence Die Trial with provenance to the 1860s, and an example of the most desirable type in the series, the extremely rare 1733 Pattern Twopence graded PCGS Proof-62 BN.

Among the most eagerly anticipated segments of the Syd Martin Collection, and one of his most beloved series, are the Connecticut state coppers of 1785-1788. Offered in this sale will be his frontline collection of the 1785 and 1786 portion of the series. Vinton remarks: “Syd’s collecting exploits in the Connecticut copper arena are well known and the stuff of legend among specialists in the series. Where 300 die varieties is the ultimate goal for most collectors, Syd amassed an astonishing 349 different Miller numbers, with mules and “Bungtown” varieties beyond that, representing over 98% completion of the entire series.” Offered in this sale will be a complete set of die varieties for 1785 and all but one variety for 1786, overall the most complete collection of these years ever assembled or offered at auction. Numerous finest known and extremely rare specimens are present including both unique die varieties for these dates, the 1785 Miller 6.6-A.3 and the 1786 Miller 4.1-H.2, as well as the unique in private hands 1786 Miller 5.13-I, the first auction appearance for all of these coins. Other highlights include the extremely rare 1785 Miller 4.2-F.6 African Head graded PCGS VF-20, the finest known 1786 Miller 2.2-D.2 Noble Head graded PCGS EF-40, and the finest and only privately held 1786 Miller 123-T “Bungtown” variety, PCGS VF-20 ex Newman.

Finally, Washingtoniana will be featured and include over 275 lots of rare and significant coins, tokens, medals, and buttons related to George Washington, focused mainly on issues from the 18th and 19 th centuries, as well as select items from the first decades of the 20th century. Washingtoniana was an area for which Syd had great passion, and he conducted extensive and groundbreaking research on the multitudinous issues relating to Washington’s birth bicentennial in 1932, which led to the posthumous publication in 2021 of his Numismatic Commemorations of the 200th Birthday of George Washington in 1932 . Offered here will be the classic Washington coins, tokens, and medals predating his birth bicentennial year and will include Washington coin and token types as listed in the Red Book. Included are major rarities, many of the most iconic Washington medals, and an impressive assemblage of rare and choice Washington inaugural and related buttons. Highlighting the Washingtoniana section is a 1792 Roman Head Cent graded PCGS Proof-64 RB, complete sets of the prized Seasons medals and Sansom medals, a gold Funeral Urn medal graded PCGS AU-53, an example of the legendary Pater Patriae button, and many other treasures.

Part II of the Sydney F. Martin Collection will be sold as part of Stack’s Bowers Galleries’ October/November 2022 Showcase Auction in special live sessions held at the Baltimore Convention Center as part of the Whitman Coin & Collectibles Expo and the 2022 C4 Annual Convention. The first session will begin Thursday, October 27 at 12:00 PM EST and include French Colonial coinage, Rosa Americana coinage, and Connecticut coppers, 1785-1786. The second session will begin Friday, October 28 at 12:00 PM EST and include Washingtoniana. Lot pickup will be available by appointment on Friday, October 28 in our Lot Viewing Room #307 and also on Saturday, October 29 from 10:00 AM to 12:00 PM at the Stack’s Bowers Galleries booth, table #731. Please contact Wayne Berkley at wberkley@stacksbowers.com to schedule your pickup. The catalogs will be available online and in print in late September, and requests for printed catalogs should be directed to info@stacksbowers.com. For more information about the Sydney F. Martin Collection, please contact Kevin Vinton ( kvinton@stacksbowers.com) or Vicken Yegparian ( vyegparian@stacksbowers.com ).