Following a record-breaking year in 2021, the World and Ancient Coin Department at Stack’s Bowers Galleries saw continued strong prices as over $20 million in numismatic items crossed the block in their annual official auction of the New York International Numismatic Convention. 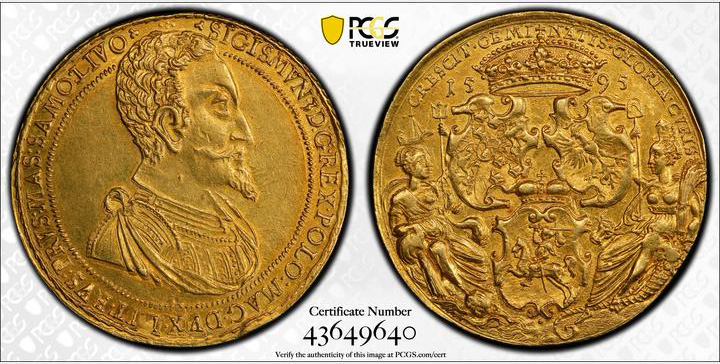 Costa Mesa, CA – Following a record-breaking year in 2021, the World and Ancient Coin Department at Stack’s Bowers Galleries saw continued strong prices as over $20 million in numismatic items crossed the block in their annual official auction of the New York International Numismatic Convention. These results confirm Stack’s Bowers Galleries as a clear leader in the World and Ancient numismatics marketplace. (All prices include the buyer’s fee.)

The sale featured numerous important collections and brought to light many treasures that had been off the market for years. Part 1 of the Mark and Lottie Salton Collection included Greek, Polish, and Russian rarities, many offered for the first time since the 1930s. The Salton cabinet of Polish gold exceeded expectations, generating strong prices far beyond the catalog estimates, led by two large sized medallic issues from the reign of Sigismund III. A 1595 Medal in 10 Ducat Weight struck in Vilnius and commemorating the Union of Sweden into the Polish-Lithuanian Commonwealth reached $480,000, more than three times the high estimate of $150,000. A 1592 Medal in 7 Ducat Weight graded AU-55 by PCGS sold for $360,000, well above the high estimate of $200,000. The Salton Collection also offered two extremely rare Riga minted Ducats which are key additions to any advanced collection of Polish hammered gold. The Riga issue from 1599/88 graded MS-63 by PCGS closed at $126,000 against an estimate of $50,000-$80,000. The second Riga piece, a 1584 Ducat from the Reign of Stephen Bathori grade AU-50 by PCGS , was the stunner of the entire action as it was bid up to $216,000, more than triple its presale high estimate. It now holds the record for the highest price paid for a Polish single Ducat at public auction.

The Salton Collection also offered plenty of treasures of ancient numismatics and formed a major part of the ancient coins presented at the sale. Two Dekadrachms from the time of Dionysios I attracted much interest, one signed by Kimon and graded NGC Ch VF ★ Strike: 5/5 Surface: 5/5 Fine Style , and the other signed by Euainetos and graded NGC Ch EF★ Strike: 5/5 Surface: 4/5 Fine Style . The Kimon piece sold for $360,000 and the Euainetos for $198,000, both well exceeding their pre-auction median estimates of $150,000 and $62,500 respectively. The Ancient Greek coins of the Salton Collection were complimented by the strong offerings in the Dr. Michael Rodgers Collection of Roman Gold. A phenomenal Elagablus Aureus from the Antioch Mint graded NGC Ch MS★, Strike: 5/5 Surface: 4/5 brought $312,000, and a Septimius Severus Aureus from the Rome Mint graded NGC Ch AU, Strike: 5/5 Surface: 3/5 Fine style realized $192,000. While these prominent Ancient collections featured the highest realizations among this specialty, prices at the Stack’s Bowers Galleries sale were strong throughout ancients in all areas and price points, confirming Stack’s Bowers Galleries’ place as an important player and rising influence in the field of ancient numismatics.

In the strong Latin American numismatic market, the Pat Johnson Collection made a splash with several high-powered items, most significantly a Mexico City 1725/3 Royal Presentation Cob 8 Reales graded NGC AU-55 , that brought $432,000, double its high estimate. This piece served as The Standard Catalog of World Coins plate coin and was previously part of the famed Virgil Brand Collection. Another Royal Presentation Piece from the Pat Johnson Collection, a 1711 Mexico City 4 Escudos graded NGC MS-66 , sold for $264,000.

The Gem Collection of British Campaign medals also delivered excellent results, attesting to strong market activity in medals. A set of 1842-3 Afghanistan Campaign Medals in Gold gifted to the Duke of Wellington when he was foreign secretary realized $33,600. A Majestic 1799 (1801) Gold Seringapatam Medal sold for $24,000, well beyond the estimate of $5,000-$10,000.

No discussion of the Stack’s Bowers Galleries 2022 NYINC auction is complete without mention of the crown jewel of the entire New York Convention: lot 1497, the famed 80 Ducats of Sigismund III . This museum quality relic brought $900,000 and was the most expensive lot auctioned at the 2022 New York International Numismatic Convention.

The outstanding results of their premier 2022 auction confirm Stack’s Bowers Galleries’ place as the market leader in numismatics. The firm’s NYINC offering featured the highest value individual lot and was the highest total value auction at this prestigious event, surpassing all other competitors. Additionally, eight of the ten most valuable lots among the over 11,000 auction lots sold at the New York International Numismatic Convention were offered by Stack’s Bowers Galleries. The ongoing success of the World and Ancient Department at Stack’s Bowers Galleries consistently attracts consignments of the most valuable and desirable pieces and collections.

Consignments are currently being accepted for the April 2022 Hong Kong Auction as well as for the firm's Collectors Choice Online Auctions, the next of which is scheduled for June 2022. To consign world coins and paper money to Stack's Bowers Galleries call 800-458-4646, email consign@stacksbowers.com, or visit StacksBowers.com.