This major Polish numismatic rarity is probably the only specimen known of this weight. 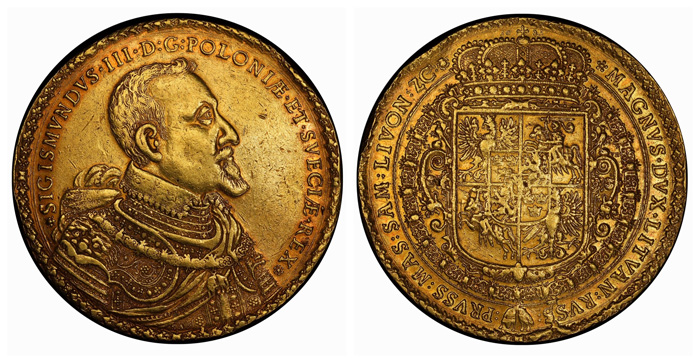 Costa Mesa, CA -- Stack’s Bowers Galleries is thrilled to announce the sale of a 1621 80 Ducats in gold at their official auction of the January 2022 New York International Numismatic Convention (NYINC). This major Polish numismatic rarity is probably the only specimen known of this weight.

This 80 Ducats is closely related to the famed 100 Ducats issue of the same year. Most sources indicate that the 100 Ducats from 1621 was minted to commemorate the Polish victory over the Turkish army at Battle of Khotyn, which took place from September 2 to October 9, 1621. This is inferred by the fact that the date 1621 is punched in three different places on the obverse and twice on the reverse of the coin. Apart from the Battle of Khotyn, there were no equally significant events in the Polish-Lithuanian Commonwealth for that year. However, neither the name of the battle nor any reference to it is found on the coin.

From a military perspective, the Battle of Khotyn can hardly be called a victory for the Commonwealth as it ended with the signing of a peace treaty when both sides refused to continue the fight. However, the battle can be considered significant enough to commemorate by minting such a magnificent gold coin because of its religious aspect. For the first time in this period of European history, the Ottoman Empire and the Sultan's dreams of further expansion of Islam into Christian countries was stopped by the Polish-Lithuanian army. As a zealous Catholic, King Sigismund III Vasa was able to mint gold 100 Ducats under the pretext of being a defender of Christianity in Europe against Muslims, extolling the power and majesty of the Polish-Lithuanian Commonwealth.

The diameter (70 mm) of the lighter coins, including the 80 Ducats coin offered in this auction, is the same as for the 100 Ducats, only with a thinner planchet. The coin was minted at the Royal Mint in Bydgoszcz. The dies represent the most refined style and detail of this period, thanks to the skill of its creator, Samuel Ammon—one of the most outstanding engravers and medalists of the time. He was born around 1590 in Schaffhausen (Switzerland) and came to Danzig in the years 1611–1613. He was employed at the municipal mint as an engraver of coins, medals, and seals, and exerted a huge influence upon the development of Danzig medalists. Ammon died on March 27, 1622, shortly after creating dies for the 100 ducats coin. His initials can be found on both sides of the coin. Additionally, the letters II – VE (Jacob Jacobson van Emden) for the mint administrator, are placed on the reverse.

As on the medal commemorating the victory in Smolensk, on the 100 Ducats dies Ammon presented a royal portrait comparable to the works of the masters of the brush at that time. The king is portrayed without a crown and with a shoulder plate adorned with a lion's head, emphasizing the ruler's courage and referencing the mythical Heracles. The reverse presents the crowned coat-of-arms of the Republic of Poland surrounded by the chain of the Order of the Golden Fleece, meaning that the whole country is identified with its idea. The elements around the coat-of-arms symbolize the royal attributes of care for subjects (cranes standing on one leg) and the right to forgive (angel's head).

Until recently, only a few 100 Ducats coins were known. In The Poland 1621 Gold 100 Ducats, published in 2018, Dariusz F. Jasek described 14 different examples (almost all with photos). Jasek states that in addition to 100 Ducats, gold coins weighing from 30 to 90 Ducats and silver coins weighing from 3.5 to 10 Talers were also minted. Coins from these groups are much rarer than 100 Ducats of full weight. Consequently, it is hard to establish comprehensive pedigrees or full provenances for any of the lighter gold emissions of 1621. The 80 Ducats offered in the Stack’s Bowers Galleries January 2022 sale, now graded AU-50 by PCGS, was last seen when it was purchased by its current owner in Stack's June 1995 auction. Previously it was listed in the collections of J.U. Niemcewicz and Clifton-Wild. Dutkowski also mentions the Drouot 1962 auction, but this provenance is unconfirmed.

There is also reference in a 1917 Mehl’s Numismatics Monthly (Vol 8, Issue 5, p. 75), to a “Mr. Leon” displaying a 70 Ducats example at a monthly meeting of the Chicago Numismatic Society on behalf on the famed Virgil Brand. It is claimed that Brand also possessed 80 and 100 Ducats pieces, though a search through Brand’s ledger (compiled when his collection was liquidated) listing foreign gold under Poland has no mention of any of these ultra-rarities. Given the poor records, it cannot be known with certainty, and Jasek’s supposition of the rarer nature of the 80 Ducats seems well-founded. Friedberg does not even list the 80 and 70 Ducats, though all other denominations of this series are listed.

This stunning Polish rarity will highlight the NYINC auction held by Stack’s Bowers Galleries and offer collectors of ultra-rarities or Polish coinage the opportunity to add their name to its provenance. This superb coin will be a leading highlight among the many rare coins offered by the firm at their January sale, sure to be a memorable start to the 2022 numismatic calendar. For more information, call 800-458-4646 or email Info@StacksBowers.com.