Acquired through private sources and major auctions in the United States and the United Kingdom, the medals of the Gem Collection were gathered with an eye not just on history, but also on quality and eye appeal. 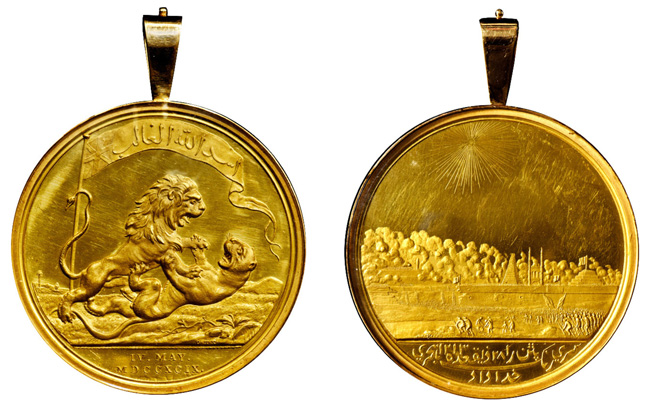 One of the highlights of the most impressive groupings of British Campaign Medals ever assembled in this country.

One of the highlights of the most impressive groupings of British Campaign Medals ever assembled in this country.

Costa Mesa, CA -- Since 1988, an American collector has quietly been assembling one of the most impressive groupings of British Campaign Medals ever assembled in this country. Acquired through private sources and major auctions in the United States and the United Kingdom, the medals of the Gem Collection were gathered with an eye not just on history, but also on quality and eye appeal.

The history of the British Empire’s expansion across the world’s continents is illustrated in the run of medals given to its soldiers from the 18th century through World War II. The Gem Collection follows the historic rise of British Imperialism, beginning with specimens of the 1773 Carib War medal that was given to soldiers on the West Indian island of St. Vincent before the American Revolution. Other early highlights include the 1796 medal for the capture of Ceylon and a glazed and cased gold striking of the iconic 1808 Seringapatam medal, struck to mark the British defeat of the Tipu Sultan in 1799.

From Nepal to western Canada, from Egypt to the banks of the Potomac, British military and naval forces crisscrossed the globe in the 19th century. Several high quality Naval General Service and Military General Service medals relate to the War of 1812, of significant interest to American and Canadian collectors, while European collectors will covet the Battle of Waterloo medal from actions in the same decade, a particularly fine specimen named to Private John Black of the 91st Foot.

The Indian Campaigns are well represented by high quality specimens, most displaying superb reflective surfaces and hand-selected visual appeal. An Army of India Medal named to Serjt. McRae of the 78th Foot with clasps for Assye, Argaum, and Gawilghur is a notable highlight. Among the stars of the sale is a set of four medals struck during the Afghan Campaigns in solid gold, specially cased and glazed for presentation to the Duke of Wellington, still housed in the original box in flawless as-issued condition. 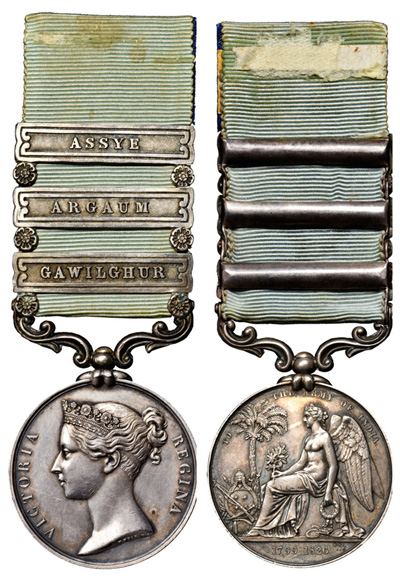 One campaign of particular interest to the man who built the Gem Collection was the Egyptian Campaign of the 1880s, and he gathered a group of no fewer than 14 medals with the Abu Klea clasp, many paired with their original Khedive’s Star.

Medals of the 20th century are led by a very fine group awarded to Flight Lieutenant W. St. G. Chandler, a photographic reconnaissance pilot with the RAF in World War II who received his Distinguished Flying Cross in 1945. His group of seven medals is accompanied by an original presentation letter signed by King George VI, his flight log books, a cap, and more.

The Gem Collection of British Campaign Medals will be offered Monday, January 17, 2022 as part of the Stack’s Bowers Galleries Official Auction of the New York International Numismatic Convention. For more information on the Gem Collection call 800-458-4646, email info@stacksbowers.com, or visit the firm’s website at StacksBowers.com .