Stack’s Bowers Galleries to Present Over 6,000 Lots in their Official Auction at the 2022 NYINC

Stack’s Bowers Galleries is proud to offer more than 6,000 lots of world and ancient coins, military medals and orders, and world paper money in their Official Auction of the January 2022 New York International Numismatic Convention. 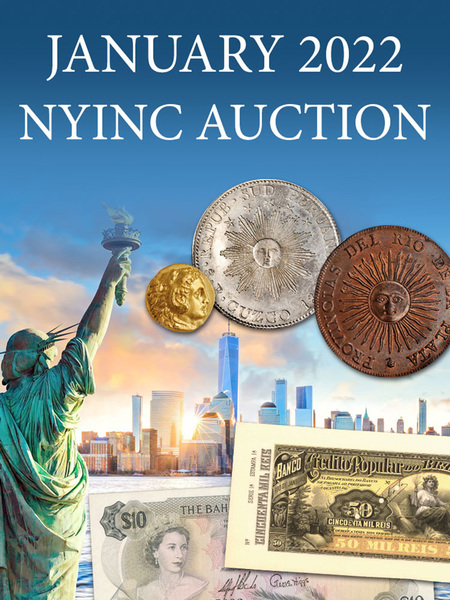 Costa Mesa, CA – Stack’s Bowers Galleries is proud to offer more than 6,000 lots of world and ancient coins, military medals and orders, and world paper money in their Official Auction of the January 2022 New York International Numismatic Convention. Featured collections include The Mark and Lottie Salton Collection Part I , The Dr. Michael Rogers Collection of Ancient Rarities , The Pat Johnson Collection of Latin American Coins , The Centuria Collection of Venezuelan Coins , The Paul C. Runze Collection of English Coins , and The Gem Collection of British Military Medals . This impressive sale confirms Stack’s Bowers Galleries as a leading force in the numismatic marketplace, building off their record-setting 2021 auction season.

The premier highlight is the fabulous 80 Ducats of Sigismund III from 1621, graded AU-50 by PCGS . Coming to market for the first time since 1995, this stunning coin is one of the most desirable items in numismatics. In addition to this singular Polish rarity, the featured collection assembled by Mark and Lottie Salton offers other ultra-rarities of the Polish series, a group sure to be remembered in the years to come. Also of note is the marvelous selection of Russian issues offered, including a desirable Family Ruble in MS-63 , a 1722 Peter the Great 2 Rubles Novodel in Specimen-65 , and a 1753 Elizabeth Double Weight and Thickness Novodel Ducat in Specimen-63+ ; the last two originate from the Mark and Lottie Salton Collection .

Collectors of British material will take note of the Runze Collection, a masterfully assembled cabinet spanning nearly the entire run of British rulers back to Roman Britain. Standouts include phenomenal and only rarely encountered hammered pre-Norman Pennies of Alfred the Great and Edward the Elder . Milled types comprise several examples of popular types, including a 1658 Oliver Cromwell Commonwealth Shilling graded MS-62 by PCGS and a stellar Proof-62 1847 Gothic Crown . The Runze Collection is complemented by the Gem Collection of British campaign medals, which is wide in scope and offers medals from conflicts from the Carib War to after the Second World War. As such, this collection houses medals from the height of Britannia and from some of the British Empire’s most important conflicts . A four-piece Gold Medal set presented to the Duke of Wellington , hero of Waterloo, presents a unique and historically important opportunity.

Enthusiasts of the strong and growing Latin American market will appreciate uncommon and valuable individual specimens, as well as the carefully formed Centuria and Pat Johnson collections. A possibly unique Venezuelan Specimen Set from 1879 highlights this area and offers key dates from the series in Specimen quality. A 1725/3 Mexican Royal Presentation Cob 8 Reales, the plate coin in Krause , presents a chance to acquire a rare two-year type in a seldom seen format. A truly phenomenal proof 1888 Ecuadorian Sucre from the Heaton Mint , virtually unknown in proof and pedigreed to the Norweb Collection, is graded Proof-66 Cameo by NGC.

Recently, Stack’s Bowers Galleries has seen tremendous growth in the quantity and quality of ancient coins offered, and this auction is no exception, featuring several high-powered collections. The expansive Mark and Lottie Salton Collection of Ancient Greek Coinage includes two marquee Dekadrachms from Syracuse during the reign of Dionysios I, signed by Kimon and Euainetos respectively. The Dr. Michael Rogers presents a fantastic group of select, desirable Roman Aurei, highlighted by an amazing Elagabalus Aureus that features the sacred stone of Emesa . One of just three known, this attractive coin is the finest preserved example and tells of Elagabalus’ attempt to promote adherence to the cult of the Sun God from which he took his name.

Among the highlights of the world paper money sessions is an Egyptian, National Bank of Egypt 1 Egyptian Pound note from 1899 graded PMG Very Fine 30. The always popular Canadian banknotes feature a 1935 French 20 Dollar note, graded Choice Uncirculated-64 by PCGS. The soaring Iraqi market is sure to appreciate an extremely rare India Print ½ Dinar Note graded Very Good-8, qualified by WBG. This note, an emergency issue in World War II, is exceedingly rare with fewer than 10 known and is desirable in any condition.

The variety and diversity of items featured in Stack’s Bowers Galleries’ Official Auction at the 2022 NYINC displays the firm’s ability to attract strong consignments across many specialties. This sale, spread over six days and 11 sessions, is a significant event that should excite collectors from all areas of numismatics.

Consignments are currently being accepted for the April 2022 Hong Kong Auction as well as for the firm’s Collectors Choice Online Auctions, the next of which is scheduled for February 2022. To consign world coins and paper money to Stack's Bowers Galleries call 800-458-4646, email consign@stacksbowers.com , or visit StacksBowers.com .