Only the Third Complete Set by Die Marriage Ever Formed 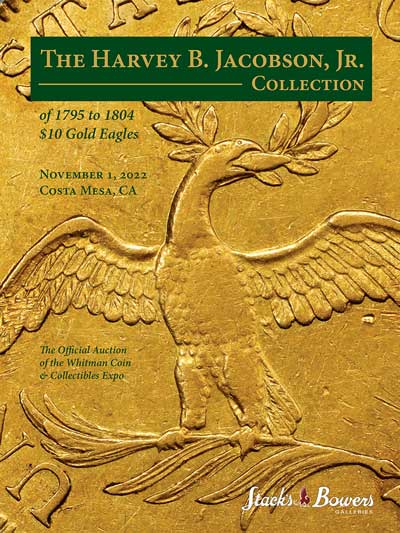 Costa Mesa, CA (September 27, 2022) – Stack’s Bowers Galleries is pleased to announce the sale of the Harvey B. Jacobson, Jr. Collection of 1795 to 1804 $10 Gold Eagles. Mr. Jacobson is only the third collector known to have completed this set by die marriage, joining the august company of Anthony J. Taraszka and the owner of the Tyrant Collection.

This 1795 $10 Eagle with 9 Leaves reverse, graded NGC AU58, is an important highlight of the Harvey B. Jacobsen, Jr. Collection

As with so many collectors, Jacobson, a patent attorney by trade, returned to his childhood avocation of coins later in life, at first collecting readily available pre-1933 gold coinage before taking a deep dive into the much rarer first gold coinages produced by the United States. Within a few years, he advanced to the challenge of collecting the early $10s by die marriage, inaugurating his collection with the early 2002 purchase of a superb, original, and boldly lustrous 1797 BD-2, Taraszka-8 with Heraldic Eagle reverse graded PCGS MS-62 (CAC).

With this auspicious start, Jacobson was hooked, methodically acquiring die marriages of the early $10s as they came up for sale through specialist dealers and major public auctions. And, just a few months after the 20 th anniversary of the beginning of his set, Jacobson filled the last hole in the collection with the acquisition of the 1803 BD-5, Taraszka-30 “14 Star Reverse” graded PCGS MS-60 OGH from Stack’s Bowers Galleries’ April 2022 Auction of the Andrew M. Hain Collection.

“The temptation when collecting a series by die marriage is to just fill in the holes with any old coins,” commented Stack’s Bowers Galleries Vice President of Numismatics Vicken Yegparian. “But Harvey was not that guy, instead picking up great looking coins and examples with significant pedigrees in his journey toward completion. His 1795 9 Leaves graded NGC AU-58 from the George H. Blake Collection is just one of the coins in the set that marries a great look with a great pedigree.”

This coin, last sold by Stack’s in its October 2006 71stAnniversary Sale, had been consigned by descendants of Blake, who had passed away in 1955. The extremely rare 9 Leaves reverse type, with only about 20 specimens thought to survive, was first published in 1926, and another example was not identified and publicly sold until 1960, perhaps making the Blake specimen only the second identified of this distinctive type.

“I have had the opportunity to work with Harvey numerous times during my tenure as president of Stack’s Bowers Galleries, and he’s been a true gentleman at every turn” commented Brian Kendrella. He continued: “It makes me happy and proud to see the fruits of Harvey’s labors in the pages of our award-winning catalogs.”

The Jacobson Collection will be featured in its own, stand-alone catalog and will be sold in Griffin Studios in Costa Mesa, CA as part of Stack’s Bowers Galleries’ Tuesday, November 1, 2022 Rarities Night Session in its Official Auction of the Whitman Coin & Collectibles Expo.

From the George H. Blake Collection before 1955.

From the Byron Reed Collection before 1891.

The Finest Certified of this Very Rare Die Marriage.

Very well struck for the issue.