Stack's Bowers Galleries to Sell the Most Extensive Offering of Colonial-Era Chilean 8 Reales in Nearly Three Decades at the 2020 N.Y.I.N.C. 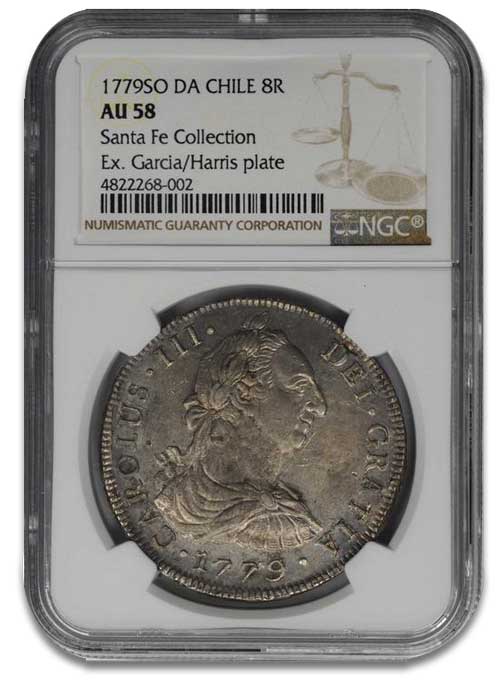 Stack's Bowers Galleries to Sell the Most Extensive Offering of Colonial-Era Chilean 8 Reales in Nearly Three Decades at the 2020 N.Y.I.N.C.

Stack's Bowers Galleries will auction off the most extensive group of Spanish Colonial-Era Chilean 8 Reales in decades in their annual official auction at the 2020 New York International Numismatic Convention.

Santa Ana, CA -- Anchored by the Santa Fe Collection, which includes an astounding 26 dates, Stack’s Bowers Galleries is excited to offer the most extensive group of Spanish Colonial-Era Chilean 8 Reales in decades in their annual official auction at the 2020 New York International Numismatic Convention. Perhaps the most challenging series within Latin American numismatics, a Chilean collection of this extent has not been offered at public auction since Ponterio and Associate’s 1991 sale of the Viceroy Amat Collection.

Presented in the January 2020 sale from the very rare period of Ferdinand VI (1746-1759) and Charles III (1759-1788) is an amazing run of nine different dates. These include an iconic Pillar Dollar and a 1789-dated issue that was struck posthumously in the name of Charles III and is considered the finest of the few known. Also rare—although not as rare as the earlier types on a relative basis—is an array of 16 coins offered from the reigns of Charles IV (1788-1808) and Ferdinand VII (1808-1821). On the whole, several coins are considered one of only a handful known, with even more qualifying as the finest known. Legendary pedigrees in the series—such as Norweb, Viceroy Amat, Johnson, Faistauer, and Freeman Craig—are also abundant.